J Grouwstra
pollinator
Posts: 129
Location: Fryslân, Netherlands
53
posted 2 years ago
I intend this topic as a document about my experiences hügeling. My situation is probably specific enough to justify a stand-alone topic. Also I'll try concentrating on how it is working out for me, rather than to go through another 'making of' kind of thing, because you've seen Hügels being built before, haven't you?

First: the climate. This is The Netherlands. This is wet. We have water coming in from big rivers, we have it falling from the sky, and if it weren't for the dykes, we would have it coming in from the sea as well. Our settlements started on Hügels. In our language we don't call them Hügels, we call them terpen. Terpen, dykes, windmills... they basically all serve the same purpose; to control the water. This has always a basic requirement for subsistence in The Netherlands.
What can also be said about our climate is that it is a sea climate. It is year-round cool. There will always be some frost in our winters, but no severe frost, and our summers are short and not very warm.

The amount of water here is a basic concern, also for gardening. If you start out with a garden, and the person before you has been less than vigilant, the place will probably look something like this: 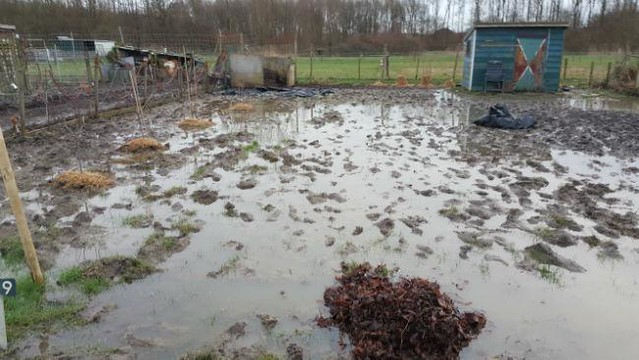 You'll be looking at an engineering task before you can put any seeds in the ground. The plot I took over October 2016 didn't look too different from the one in the picture above. There were beds, but it still was a barely accessible place; you couldn't put a foot down without it being sucked away in the heavily waterlogged clay. Then in the dry spring of 2017 it became hard-baked stone with large cracks in it. By then I had already started hügeling, as I had been pointed out to the principle by someone who had seen a few pictures of my plot and thought I would find benefit from building Hügelbeets.
I started out modestly and not building them high. I didn't feel certain about how it would work out. I certainly didn't want to make a statement, I just wanted better workable beds. I felt the soil needed organic matter added badly, and a better ability to cope with water; I had problems to solve. In the soil as it was plants' roots could hardly penetrate. Strong rooters, like alliums or carrots, still coped reasonably well, but weak rooters, like beans, had a hard time and didn't come to much. Most plants choked, while deep rooted weeds, pioneer plants on compacted soil, were inextinguishable.

To cut a long story short, hügeling sorted almost all my problems, not over time, but basically from day one. If the starting situation is bad enough, then that is what can easily happen.

I'll expand on this story some other day, I'll just leave you now with a picture of my artichokes today, and how they look a few plots nearer. I think the difference the Hügelbeet makes here is between drainage and drowning! 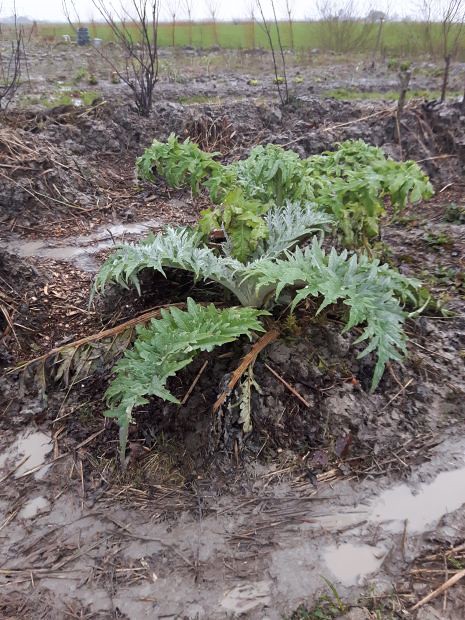 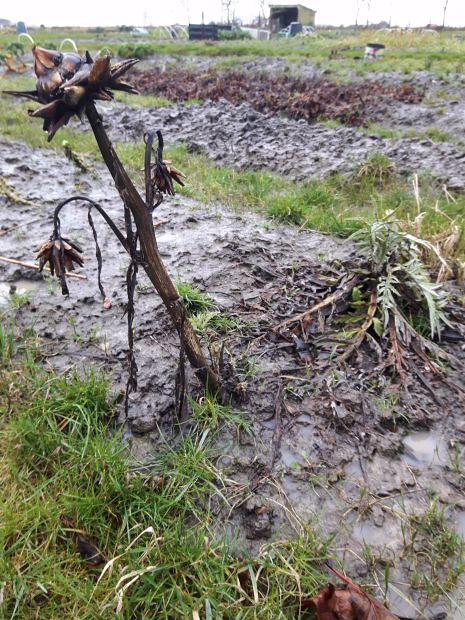 J Grouwstra
pollinator
Posts: 129
Location: Fryslân, Netherlands
53
posted 2 years ago
The Netherlands... not all people will know how that looks like. Here's a picture of a fairly undisturbed area nearby where I live:

But almost all of The Netherlands is very much designed by human hand, possibly it's one of the least natural areas in the world.

Some pics of a Hügelbeet I made on my piece of allotment February 15: 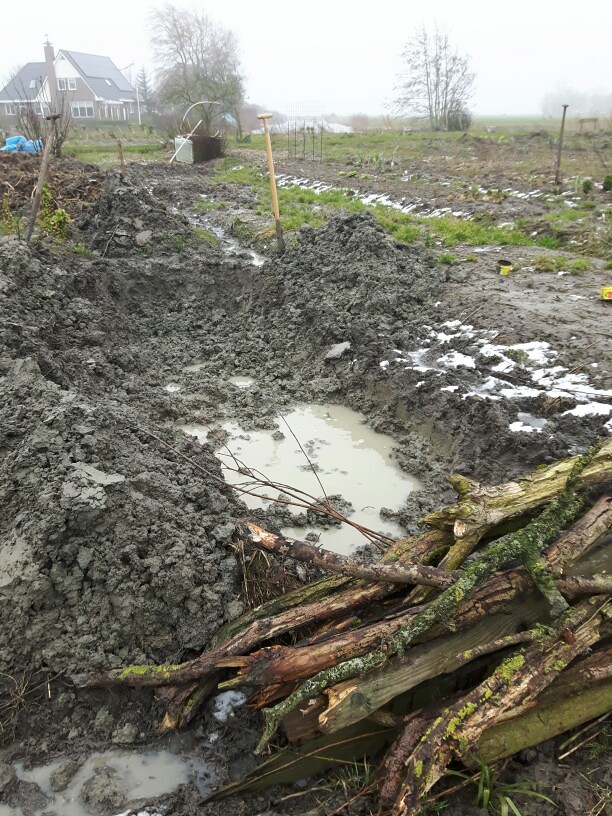 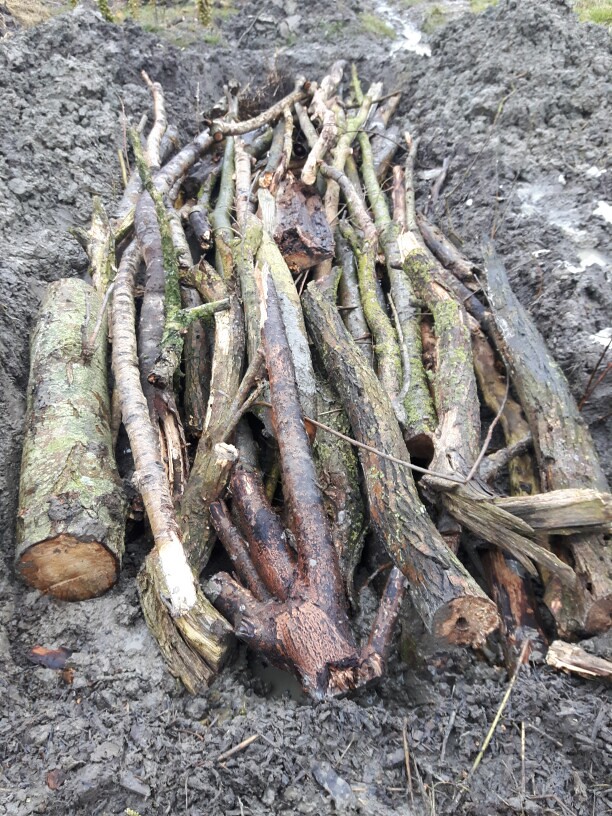 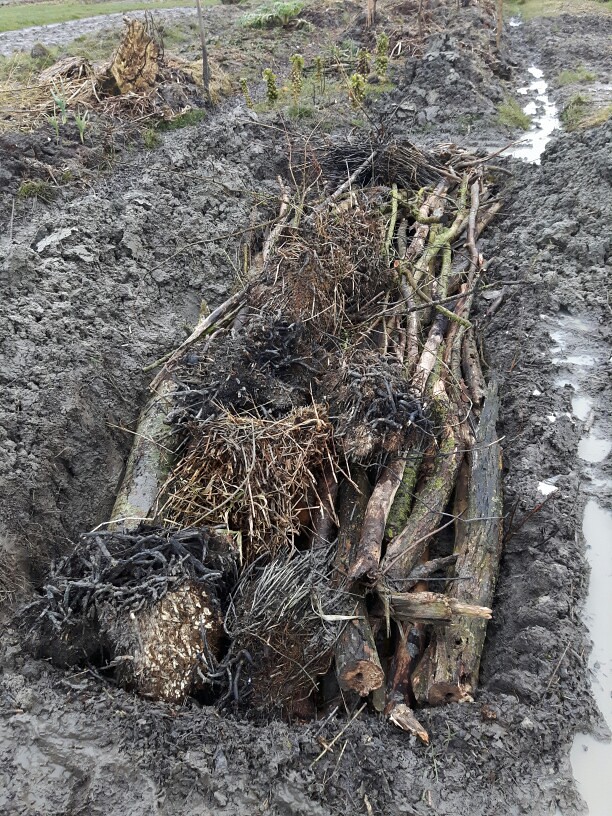 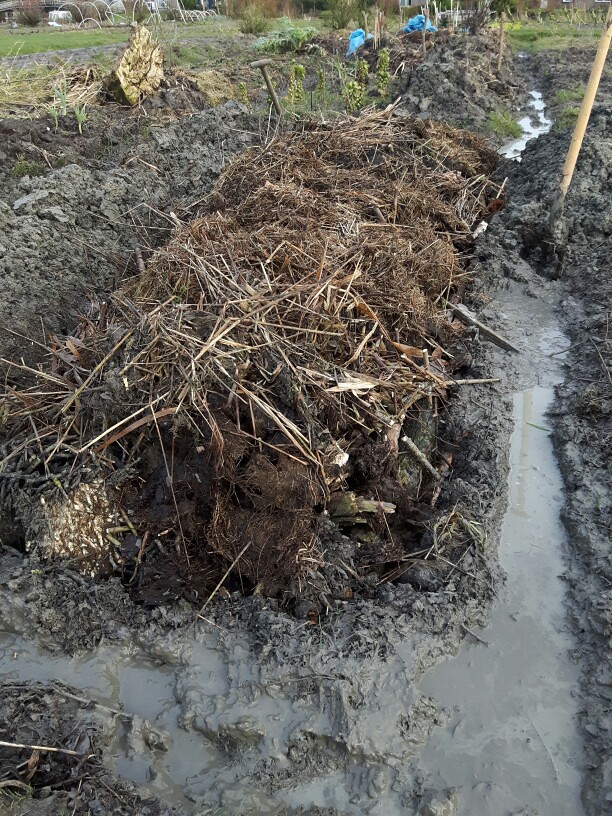 After this the soil goes on it, and then mulch. A fairly standard way of making such beds, I believe.

I start out digging a foot or so deep, I believes making a hole first helps contain water. When packing with wood I just throw the logs in, so I'm not packing tightly. Saving time is basically why I do it that way, but also it might not be a bad thing if there's a lot of air in the beds, because that means more room for water. How much the beds will sink is hard to tell, but I'm making them a fair bit higher now than I did in the beginning.

I believe I can already see the new beds help keeping the surface a bit drier. I have pictures for comparison. The first picture is last winter, when I had never even heard of Hügelbeets, and the second picture is of this winter. There's only a tiny bit of my plot visible in the foreground, it's where the cale is; that is on a Hügelbeet. The foreground is noticeably drier in the second picture, while the weather had actually been much wetter. I believe the Hügelbeet managed to suck in a lot of water. 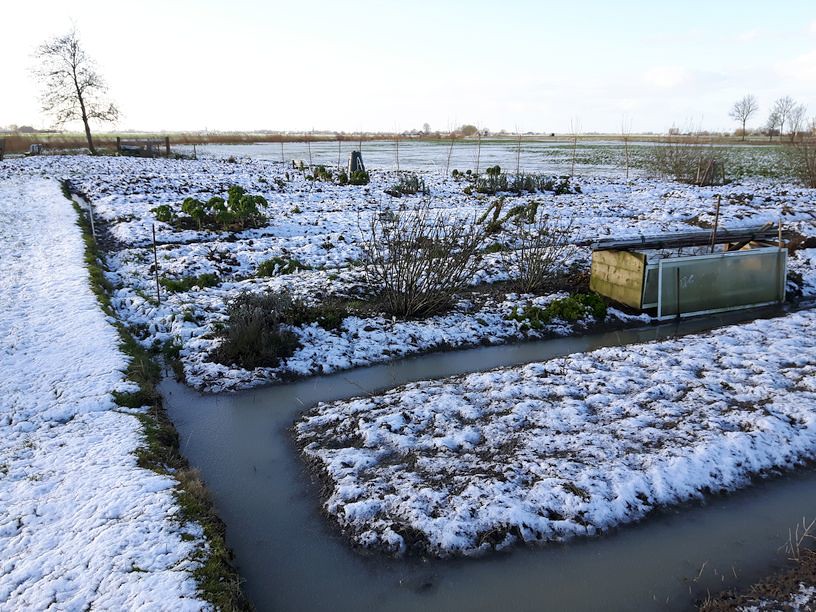 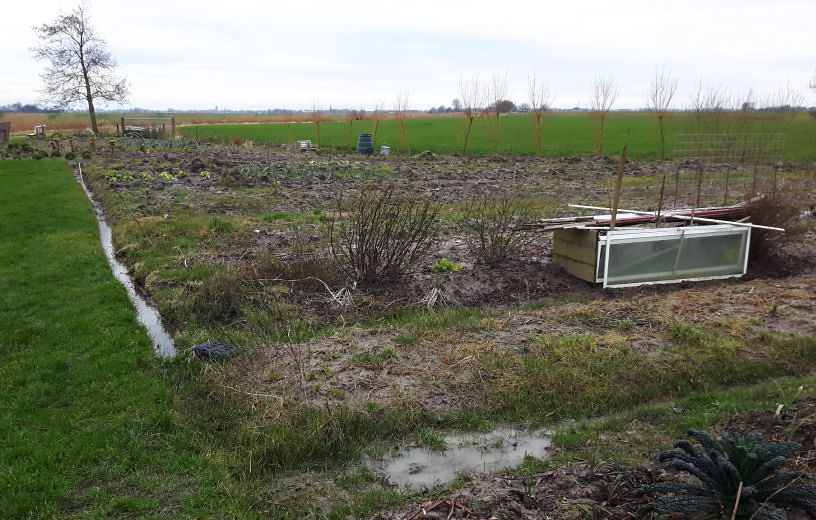 posted 2 years ago
Great thread J Grouwstra, thank you for showing one the prime reasons the Hugel was figured out in the first place, to make gardening possible in wet lands.

I love your photos, showing the difference too.

posted 2 years ago
Thanks for the pictures J, & please keep us updated on the progress of your hügelkultur beds.
It's been a while since I've read Sepp Holzer's Permaculture. I borrowed it from a friend, read it, then gave it back, so unfortunately I do not have the page reference. However, I think I remember reading that the wood should be buried in well drained (sandy) soils &/or very dry climates & raised clay soils &/or in wetter climates. Can someone check this to corroborate or correct me?