Christopher Churchill
Posts: 24
2
posted 2 years ago
So Winter is set here where we are in Ireland, and I'm having a large problem with water logging the soil. and creating a mud field...
I wanted to avoid digging in french drains and use a more natural solution. Does anyone have any idea?
Chris
Dale Hodgins
Posts: 9002
Location: Victoria British Columbia-Canada
670
posted 2 years ago
Little hills for early planting. Start things on the raised area. As the land dries, roots will move down and out. You can also do long ridges.
Anne Miller
master steward

posted 2 years ago
What about digging some ditches to divert the water to lower areas?

A few years ago, a neighbor was complaining that when it rained the water was washing onto his property.  During a rain incident, I took a hoe and dug a trench about a foot from the edge of the driveway from one end of the drive to the ditch at the curb.  No more complaints.

Christopher Churchill
Posts: 24
2
posted 2 years ago
I allready have drainage ditches dug throughout the property, but it's still water logging on the little islands...
I have 5 acres so digging a ditch with a hoe isn't really an option I was looking for something on a larger scale, maybe books to read on water management ?
Sebastian Köln
Posts: 541
Location: Abkhazia · Cfa (humid subtropical) - temperate · clay soil
59
I like...

Could a plow be modified to create small grooves, that then connect into the ditches?
Chris Kott
pollinator
Posts: 3562
Location: Toronto, Ontario
487
I like...

posted 2 years ago
Hi Chris. Great name, by the way.

Why is your land waterlogged? Is it sitting on a layer impermeable to water? Is it heavily clay-based? Are the particles all the same size, and really fine?

In other words, is your land wet because there's nowhere for the water to go, or because it moves so slowly/not at all through the soil structure?

There's a thread on this site that I will see if I can find to edit in after I post this, where the OP is trying to increase drainage in her field which won't drain fast enough. Her field sits 2 metres above her neighbour's, which has no such issues.

There are a number of permaculture tools you could use, but we need more information to be able to decide which ones are right for you.

If, for instance, your soil was heavy clay, maybe calcium deficient, and the particle sizes too small and similar to allow for water to drain properly, I would suggest lots of organic matter, gypsum grit and dust, and a good broadforking on contour, in the same pattern as swales (unless you can gradually broadfork your whole acreage).

This, however, might not do anything, or might even do harm, if it is ill-suited to your specific situation.

So if you can give us some more information, maybe pictures, maybe pictures of a hole you dig where you're talking about, with close-ups of the soil and soil strata, that will help us make useful suggestions.

A soil test would be really useful, too.

So please keep us posted, and good luck.

Lia MacLellan
Posts: 11
2
posted 2 years ago
What's your land look like topographically? If you have a contour map you could post or direct us to, that'd help a lot.

Water goes downhill--it sounds stupid, but it's the first thing you have to remember. If you're at the bottom of a valley, with steep walls on either side, of course you're gonna have water logging problems. That said, there are absolutely solutions here. Beyond just digging ditches, what about going further? Digging a pond and some swales might work wonders. Or, if you want a really crazy idea...

Are you familiar with chinampas? Floating garden islands used by mesoamerican civilizations to grow food in the middle of a swampy lake. There are some amazing pictures and videos floating around the internet, but I'll trust those to your skill with google. What I'm getting at is that you might be able to do something similar. Big, deep ditches (think cranberry bog deep, or deeper) and pile the soil from that up on top of the rows in between. The rows in between are above water level so they stay fairly dry, but wick up enough water that irrigation isn't a concern. You'd have to plant with diverse groundcovers to prevent erosion and dredge the ditches occasionally, but I'd wager you'd get a good extension on your growing season.

You could also use the ditches to grow duckweed, azolla, pond lily, katniss, and whatever other aquatic plants you want. You could even do something similar to Geoff Lawton's floating bamboo plant raft. If they're deep enough, maybe even toss in some shrimp, carp, catfish, crawdads, etc. Don't get me wrong, it'd certainly take a while to do on 5 acres, even with an earthmover, but you might be able to reach really impressive levels of biomass production, especially if the ditches and the beds between them were nice and wiggly instead of straight.

As a disclaimer, pseudo-chinampas of this nature might not work at all in your climate. The thought of it just sounded amazing to me, so I figured I'd share. 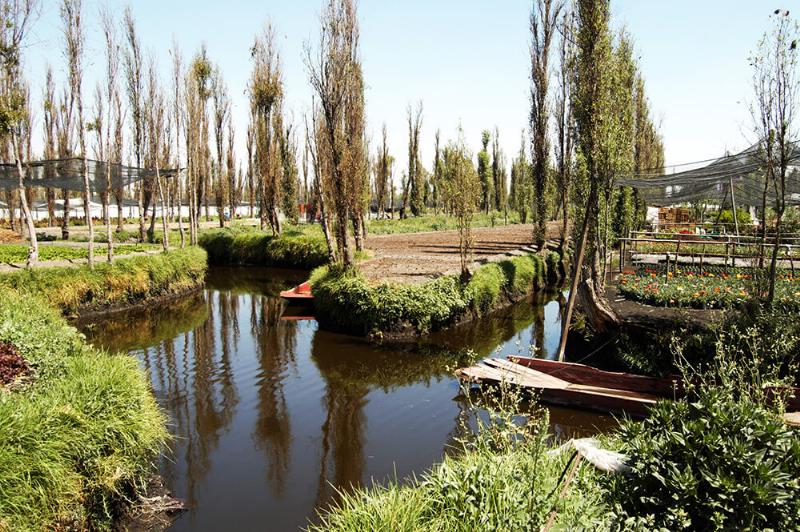 A picture of some modern day chinampas for reference.
Christopher Churchill
Posts: 24
2
posted 2 years ago
Hey Chris,
It mainly waterlog's due to the soil being really clay heavy at about 30 cm down its solid blue clay. I live in leitrim which had notoriously bad soil, they suffered the worse during the potatoe famine due to the soil not supporting anything else.
I'm on the phone at the moment but I'll post a contour map and a soil sample next week that  you everyone for your help so far.
Chris
The second photo here shows a wide angle with our pond in the middle but it waterlog's everywhere....
IMG_20180102_162635.jpg
IMG-20180202-WA0004.jpg
Dale Hodgins
Posts: 9002
Location: Victoria British Columbia-Canada
670
posted 2 years ago
I think your land may be a perfect candidate for a mixture of long raised beds, between ponds. Your water temperature will be suitable for carp and hopefully other more valuable fish. Azolla blooms could be used to feed poultry or other animals and to fertilize the hills. You'd get duckweed in the cooler season. There are several types of wild rice that could grow along the margins.
Nick Kitchener
pollinator
Posts: 715
Location: Thunder Bay, Ontario, Canada
88
posted 2 years ago
I was thinking a network of raised hugelbeds and ponds too. Since it is gently sloping land, I think you're sitting on a wonderful spot. The potential is huge.
Chris Kott
pollinator
Posts: 3562
Location: Toronto, Ontario
487
I like...

posted 2 years ago
Dale has a good point.

Building a chinampas-style setup could turn your waterlogged land into ponds that produce at least carp, but probably some type of catfish, too, along with some kind of waterfowl, wild rice, livestock feed, and several raised beds that would be constantly sub-irrigated, which you could periodically top up with nutrient-rich dredgings every season or two.

K Revak
Posts: 24
Location: Southern Alberta
posted 2 years ago
Last spring I looked at a 100 acre plot of land that was very boggy with many areas that had areas raised a foot or two that supported mostly birch trees.  This is in central Alberta.   Far too wet for conventional agriculture or grazing.  Price was cheap and was thinking with hugelculture and some drainage ditches it might work.  Mosquitos are horrendous tho.   Wrote it off as a type 1 error but...

What is other's experiences with re mediating boggy terrain?

posted 2 years ago
Another thing you could do is get a soil sample and work on the quality and nature of the soil. If you already have one, you will know if your soil has specific mineral needs.

One that often comes up with some impermeable clay is calcium deficiency. Some gypsum grit and dust applied to the top and then broadforked in might just increase water infiltration by itself, by holding open channels physically in the soil structure, by giving the clay something other than itself to cling to, which opens spaces in the soil.

How much organic matter is in your soil? Whatever you decide to do with land forming, clay usually calls for copious additions of organic matter. I would do that and the rock dust, maybe in rows on contour for starters, just to gauge how well it works, and to put in place traps to hold sediment as it is washed over your land.

I would suggest broadforking as a method of working your amendments in rather than a plow, for fear that the plow could smooth out the clay at the bottom of each furrow, making drainage worse.

Also, I suggest you look into Bryant Redhawk's two threads on soil science, posted below.

I suggest that you think about green manures in your area that don't mind or that actively enjoy wet feet. Getting living roots into that soil will boost soil life on its own, and the soil brute squad is what does most of our work for us. You can just sow a mix of clovers and whatever works in your area on contour with the on-contour broadforked rows.

Maybe try potatoes, which have no problem growing in clods of disturbed soil. Considering that historically they grew as a crop in the area, you might want to think about a variety of different potatoes, suited to different extremes you're likely to find from year to year, but that's a case unto itself for the potato. I would select an appropriate mulch with which to hill up your taters as they grow. It would add to the organic content of the soil as it broke down.

Once you have live roots and organic matter in the ground, I would inoculate your soil, either with live compost, a compost extract as detailed in the threads above, or a dilution of one part raw milk (if you happen to be able to source it) to ten parts or less water. This will give the soil an injection of bacteria at least, and fungi in the case of the compost-based methods, for fungi and soil macrobiota to consume. And all this soil life will increase water movement through the soil.