How do you guys feel about prepping/ survivalist culture?

Marco Benito
Posts: 61
13
posted 2 months ago
Most folks aren't real when it comes to prepping or surviving.  Prepping is practice.  Just like shooting or setting snares. You have to practice.  Here are some examples:
1)  Go to your main breaker and kill the electric power to your house for 24 hours, (simulating grid down.)  Now, what do you do?
Get out your paper and pencil, not your stupid phone, and write down the problems you encounter and what you would do about them.  What about the food in your fridge or freezer?

2)  Go out to the street and turn off the water for 24 hours.  Same drill here, get out the pencil and paper and begin writing down the problems you encounter and your solutions.  Are you ready to not flush your toilets?  What about water for cooking and personal hygiene?  Do you have adequate water stored up?  With regard to 1) above, what if you have an electric pump on your well?  What then?  Hmm....

3)  Park your cars miles from your house then get a ride home.  What are you going to do now?  (simulating no gas for the car)
Break out that pencil and paper and begin writing it all down.

I'm sure there are many out there that can think of a ton more
Henri Paves
Posts: 4
3
posted 2 months ago
There's a lot of lone-wolf doomers out there, but for an outstanding introduction to basic principles, I can't recommend Fieldcraft Survival enough. Mike Glover's concept about The Pillars of Preparedness is just awesome to break things down. 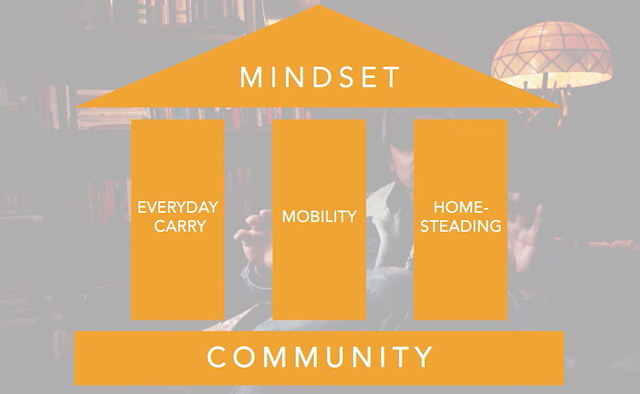 So, if you look at the three pillars and the foundation, it seems to me that most survivalists start with the idea of being well prepared in an EDC sense, and then build up towards mobility (especially the "bug-out" subset) or homesteading (especially the "bug-in" subset), depending on where they live. Most city dwellers end up realising that homesteading is the superior option, and then working towards that. And then they hopefully realise that they really need a community to have a chance of pulling it off.

Now, I don't have much experience with permaculture or the community just yet, but it seems to me that the ultimate goals of both groups are the same, it's just that the permies will start from the other end. Community support for ideas/workshops/experience, then hopefully your own homestead, then being able to go and help out others (mobility), and then ... maybe EDC?

I've yet to see any prominent permie talk about EDC, but likewise in the prepper sphere, not many people talk about communites and how to build them, which seems to confirm my theory about both eating the same pie from different ends.

In any case, if you want to check out Mike's work he has videos out on mindset and EDC, the rest presumably coming out at a later date.