julian Gerona
Posts: 280
Location: Philippines
posted 4 years ago
So this is the herb drier I recently finished constructing on its test burn

anyways, I dont want to lace the herbs with bad chemicals from whatever it could be burning from my new charcoal burner. It is an updraft drier meaning air enters at the bottom and exit at the top. The fan is located on top

I use charcoal because its economical in our place and more renewable than LPG. So the drier is a common cabinet type drier. The novel part is how do I burn the fuel efficiently in a more controllable manner. Heres the pic of the burner this is the first prototype of its kind that I am aware of, so I used mostly scrap materials as I dont want to waste something on a device that is not going to work properly:) 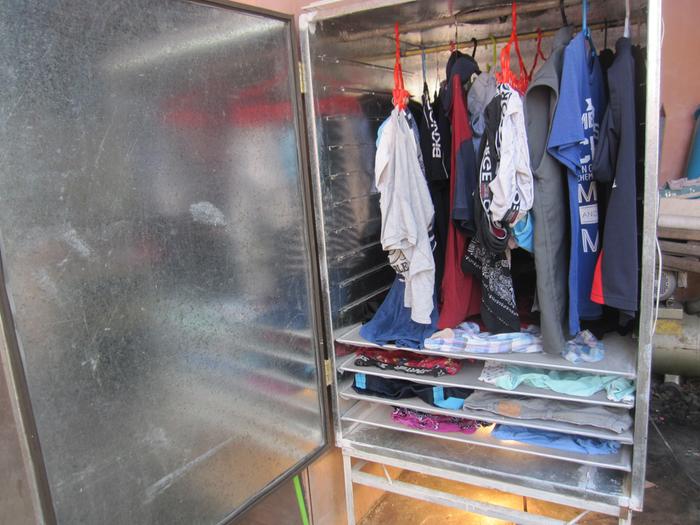 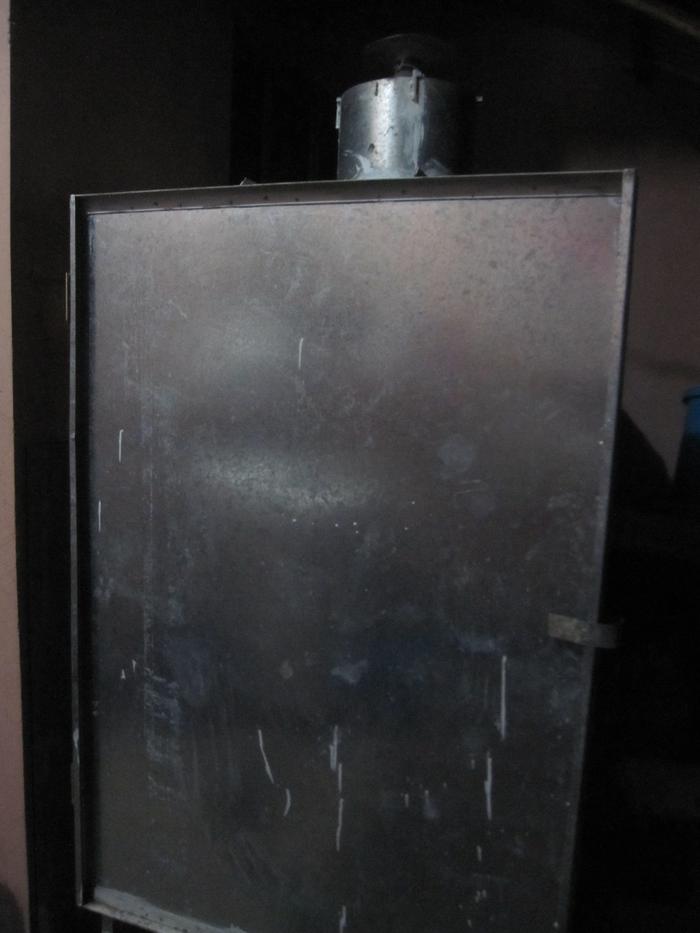 julian Gerona
Posts: 280
Location: Philippines
posted 4 years ago
Ha my thread goes live without my permission. I know I push the wrong button.

The reason the fan is located on top is because it sucks air from the compartment instead of blowing/forcing it in the compartment like the usual driers. When air is force in it means pressure is positive not good. Because water evaporates faster when pressure is negative and the moisture carrying capacity of air is increase. So I suggest if you make a drier, make the pressure negative if possible.

Lets talk about the burner I used an empty refrigerant tank the insulator is the excess skim coat from my painting project. I wrap the hot gas pipe in fabric after applying the insulator to prevent it from falling. No the fabric did not burn on my first test:). this a deviation from the usual bottom lit downdraft (BLDD) and top lit updraft (TLUD) gasifiers, This systems are more difficult to control because the fire tend to chase the the oxygen source resulting in more decomposition of fuel more than the required. So I designed what I call partial draft. Meaning air enters at the bottom or at the side and exit on the other side and the air does notpass through the whole classifier limiting the decomposition and burning to the area of air stream which is the burning zone 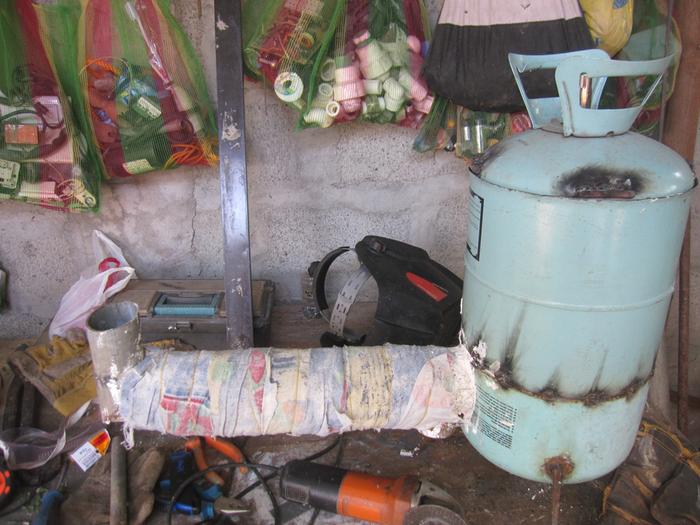 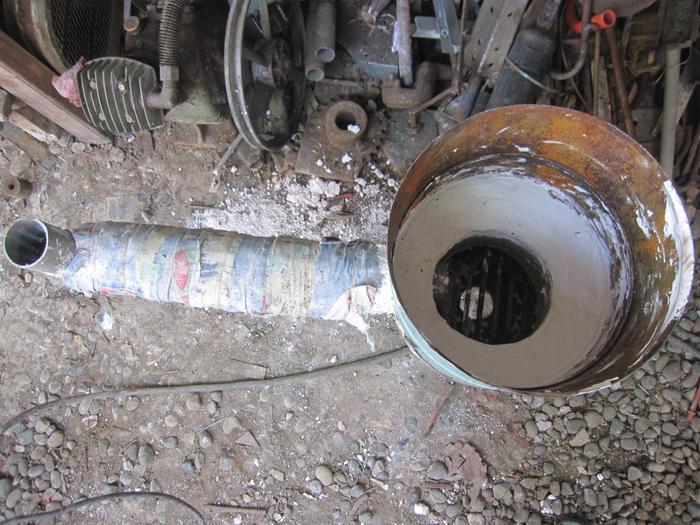 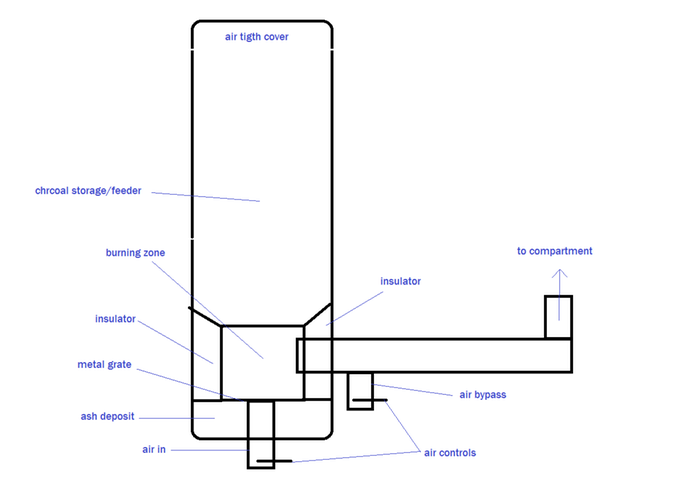 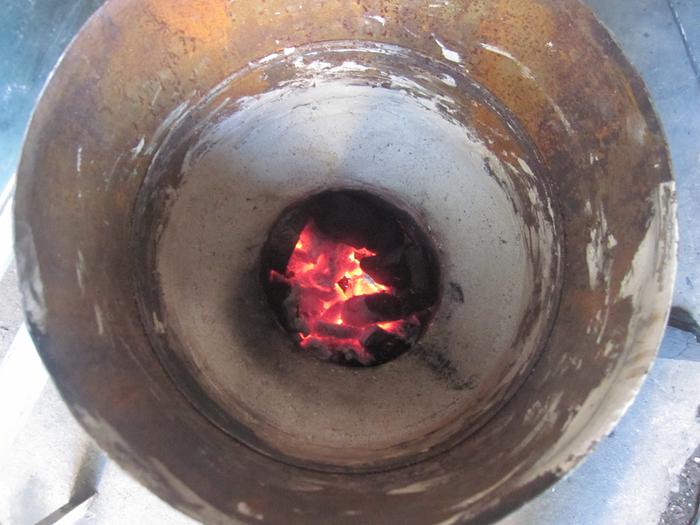 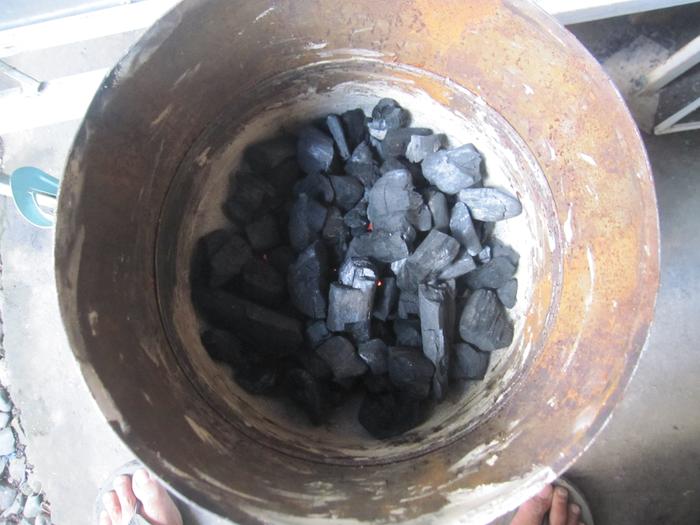 julian Gerona
Posts: 280
Location: Philippines
posted 4 years ago
I did all tricks o control the fire, opening and closing the air inlet and air bypass even tried to open the top partially. This better be good or I will be in hot water for smoke scented clothes or worse burnt clothes
IMG_1548.JPG 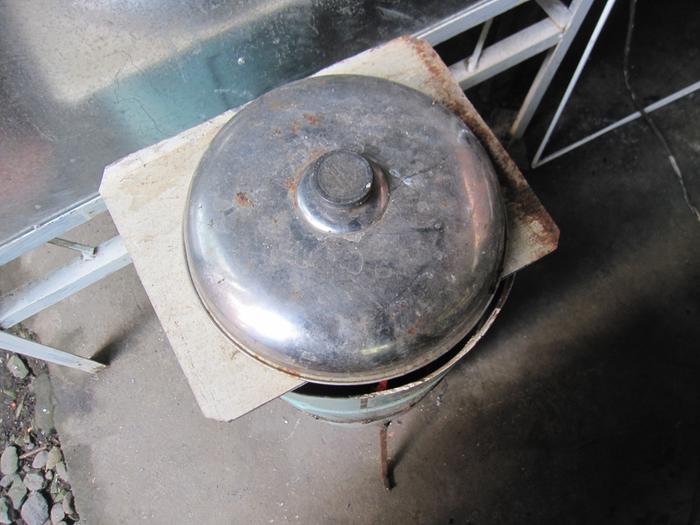 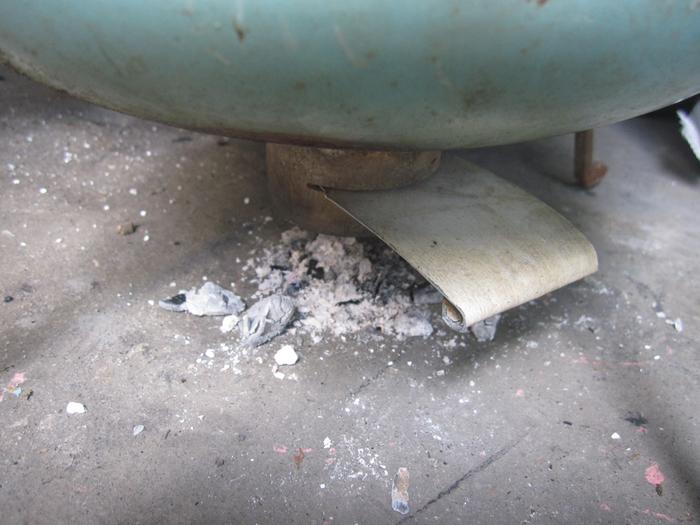 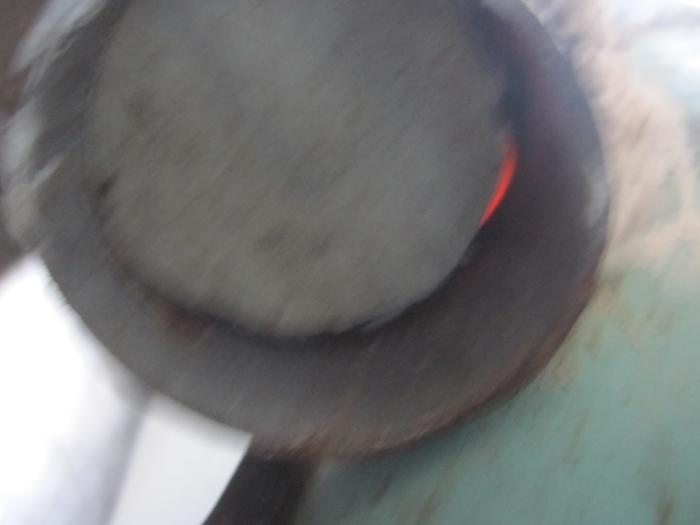 julian Gerona
Posts: 280
Location: Philippines
posted 4 years ago
Finally I settled for fully open air inlet partially open air bypass and fully close top. After 8 hours an 2 batches of 3 and 4 kg clothes. I concluded the test. No burnt clothes, clothes did not smell smoke either but it smell like burnt skim coat, only slightly though.
IMG_1564.JPG 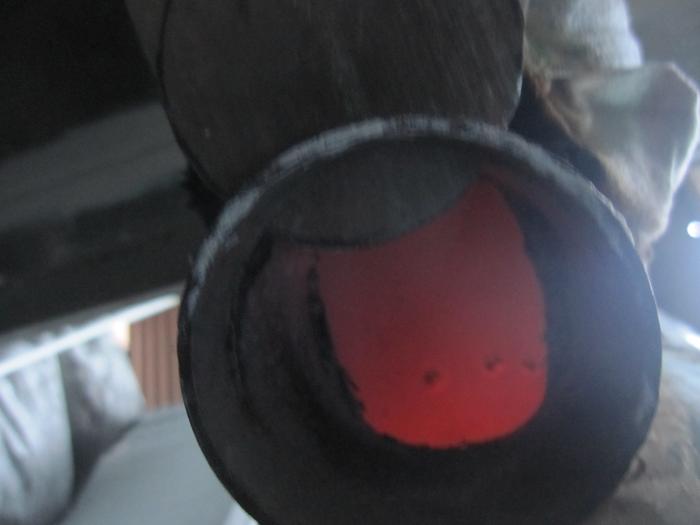 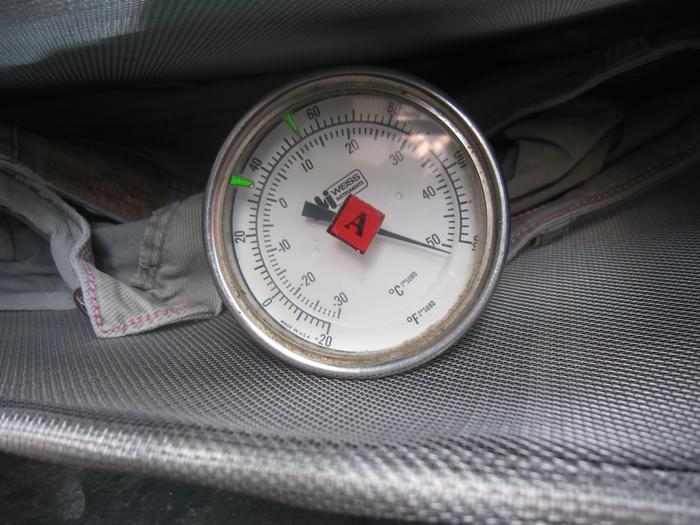 julian Gerona
Posts: 280
Location: Philippines
posted 4 years ago
As I write this, the first batch of herbs is in process
IMG_1575.JPG 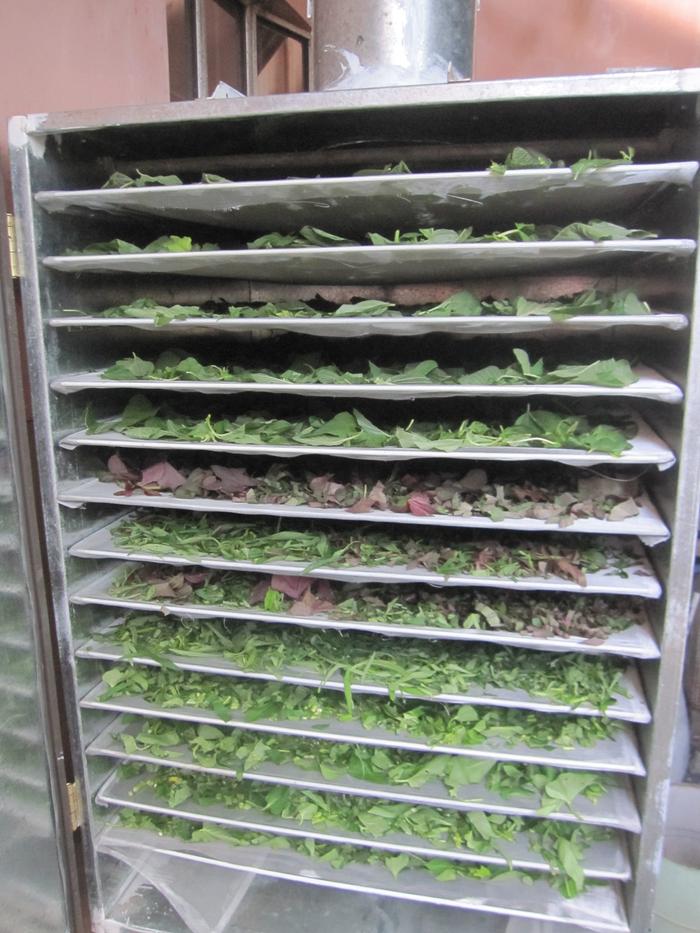 julian Gerona
Posts: 280
Location: Philippines
posted 4 years ago
For a more serious drying here is an industrial scale herb and grain drier. Its a drum drier. The latest device I designed and constructed in line with my profession. Its wood fired and the first of its kind at least as I knew of.

Questions and comments are welcome I will try to answer any query to the best i can. Hope my grammar stay in line 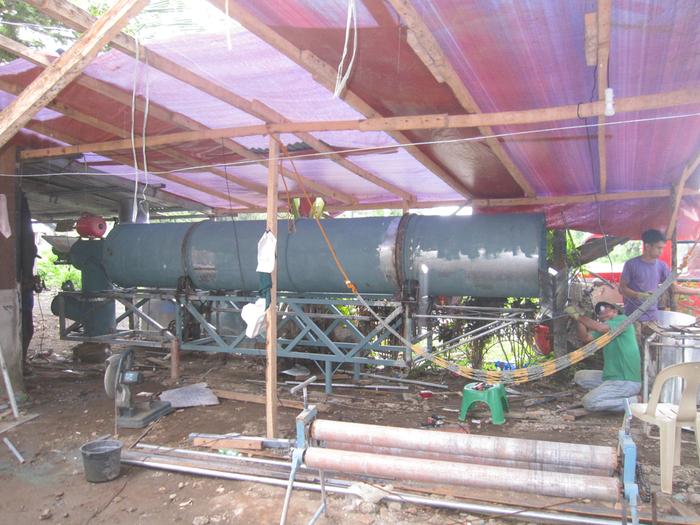 julian Gerona
Posts: 280
Location: Philippines
posted 4 years ago
after six hours of running I check and the temp. drop below operating. Turned out that the grate/grill is clogged with ash. Grate should be two piece and a provision to shake one part should be provided.
I also forgot to mention the danger of overheating fan motor because its in the stream of hot exiting air. If there is a fan that can be installed with the motor out of the hot air stream then the better the centrifugal squirrel cage fan maybe  best suited for this application. But since I used whatever is available I installed the common axial fan. I like this neat little trick I made to insulate the fan motor but at the time provide cooling air. operating ambient is 43 to 47 motor is rated at 40 ambient. motor is supposed to burn in a couple of hours but since it did not means my trick works.
looking at the fan I got the hunch that there is a dead zone at the center of fan blade. so I installed an insulating pipe and air deflector to separate the space from the hot air stream and took advantage of the situation. 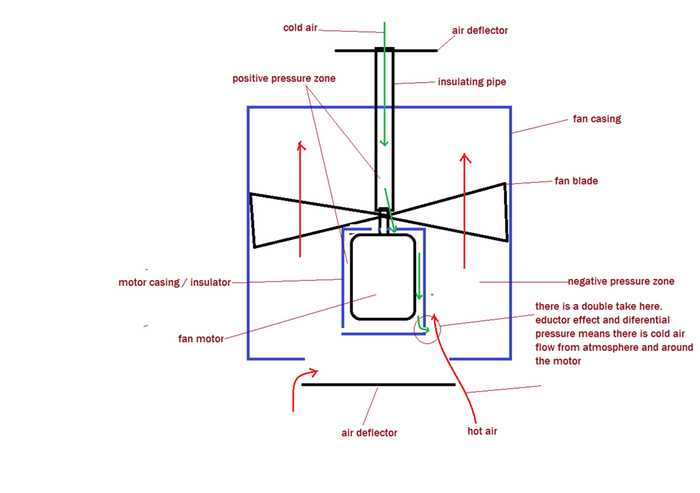 julian Gerona
Posts: 280
Location: Philippines
posted 4 years ago
after 16 hours of running the herbs did not dry evenly. This is actually an area of concern this is common for cabinet dryers. I originally planned to install a dynamic air deflector operated by the incoming air stream to get even air flow, since. But since the inspiration did not come on time and I have ran out of herbs I decided to go for the test. bad decision. I will say the dryer is a failure for now. the burner though saves the day. I think the burner itself will pay off more than the dryer itself. another advantage of this gasifier over the usual BLDD and TLUD is the more stable heat all through out. The BLDD and TLUD requires more pressure from the fan since it has to push the air all through out the gasifier. As the fuel burn and the file of fuel becomes thinner the fire increases. There is also a need to insulate the whole gasifier as the fire runs bottom up or up to bottom. This partial draft gasifier gives even heat all through out and there is no need to insulate the whole gasifier. More over I can make the fuel storage as tall as I wanted so I can feed the exact amount of fuel for the duration of drying. I think the loop pass  with dynamic air deflector is the way to go.

anyone have an idea to save this baby .... 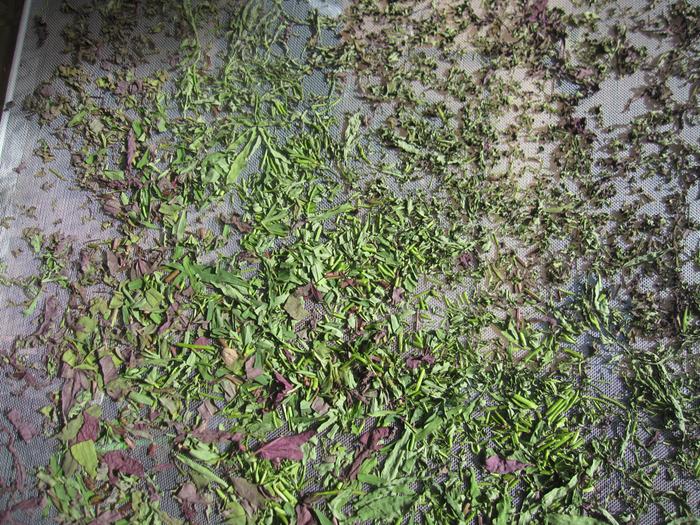 Larisa Walk
pollinator
Posts: 353
Location: South of Winona, Minnesota
79
posted 4 years ago
This dryer (see website below) is soooo much simpler and has worked since 1985. It will dry herbs in a few hours and most everything else in 1-2 sunny days.
http://geopathfinder.com/Solar-Food-Drying.html
julian Gerona
Posts: 280
Location: Philippines
posted 4 years ago
Thanks Larisa I have my solar drier that I still use occasionally. And besides I have a limited space in the city. I am also experimenting with different kinds of driers as part of my plan to commercialize my medicinal herbs. I mean when you go commercial you cant be dependent on weather. Solar driers have their niche but they cant serve all purpose.

julian Gerona
Posts: 280
Location: Philippines
posted 4 years ago
Two hours after giving, up inspiration is granted. I converted the cabinet drier into a flatbed type cabinet drier. I pace all the herbs in just one tray. which restricts the flow of air. When air flow is restricted it finds its way through them maze and is evenly distributed. After 23 hours finally a crisp dried herb. I added another batch. flat bed type. Less than 8 hours and its done. "flatbed type cabinet drier". this one is good.
IMG_1582.JPG 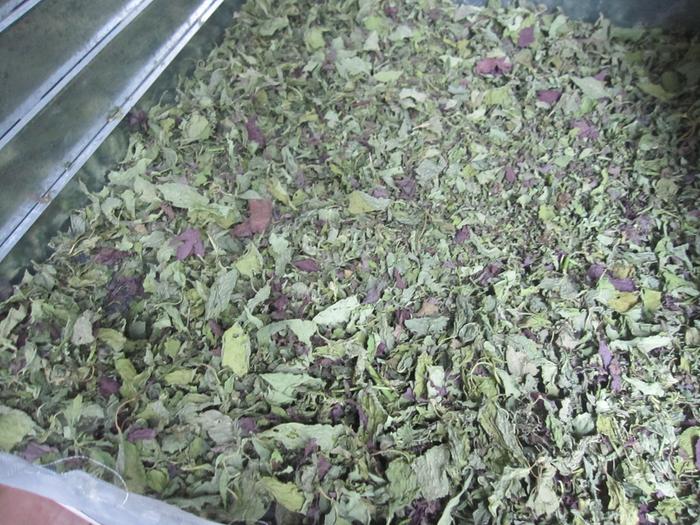 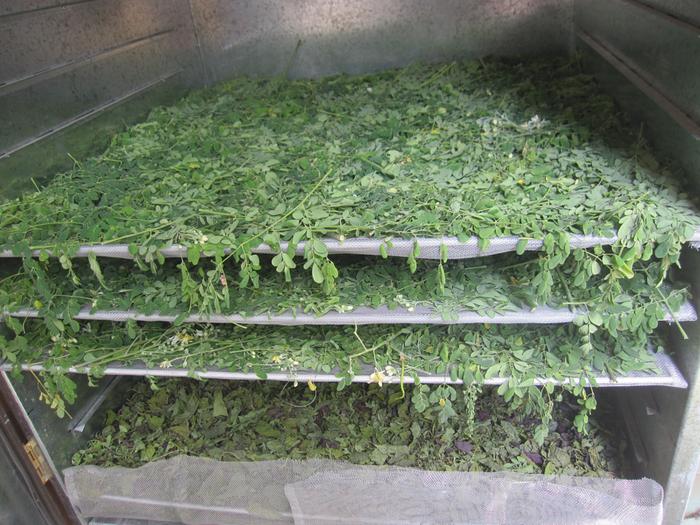