Suzy Bean
pollinator
Posts: 940
Location: Stevensville, MT
25
posted 9 years ago
www.dailytransformations.com/food-cravings-here-is-what-your-body-really-wants
This page has a nice chart of what cravings are related to the need for different nutrients. It also shows what foods we can eat to get those nutrients and satisfy ourselves. Kinda cool.

posted 9 years ago
I did a copy and paste of some of that list, printed it and put it on my fridge. 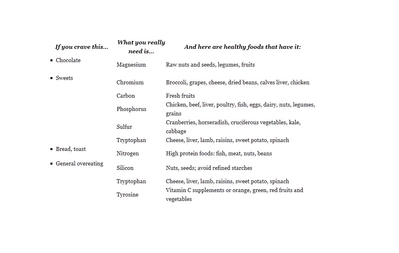 T. Pierce
Posts: 254
Location: Virginia
1
posted 9 years ago
fascinating. thanks for the info.

Mac Nova
Posts: 24
posted 8 years ago
If you examine the chemical composition of sugar and cocaine you will find they are exactly alike with the exception of one molecule of nitrogen.
Craig Conway
Posts: 79
Location: Maine, USA
posted 8 years ago
Nice link

Derek Brewer
Posts: 118
Location: Hatfield, PA
2
posted 8 years ago
But... Chocolate's not bad for you... And neither is bread/toast...
The key, as with everything, is moderation. Interesting to see what you're actually craving, though.
http://www.bloomberg.com/news/2011-08-29/a-little-chocolate-goes-a-long-way-in-keeping-healthy-heart.html
George Lee
Posts: 539
Location: Athens, GA/Sunset, SC
1
posted 8 years ago

MacNova wrote:
If you examine the chemical composition of sugar and cocaine you will find they are exactly alike with the exception of one molecule of nitrogen.

I always tell my friends eating excessive sugar is poisoning to our systems..

And alcohol in quantity, for sure.

TheLight wrote:
But... Chocolate's not bad for you... And neither is bread/toast...
The key, as with everything, is moderation. Interesting to see what you're actually craving, though.
http://www.bloomberg.com/news/2011-08-29/a-little-chocolate-goes-a-long-way-in-keeping-healthy-heart.html

Cacao is the most antioxident rich thing on earth (4 times as much antioxidents as green tea). Lemme stress, we're talking unadultered dark chocolate here, not milk chocolate. Raw cacao is a great source of iron, giving you an uplifting feeling or 'high' often times..Also:

- Serotonin - Cacao raises the level of serotonin in the brain and therefore acts as an anti-depressant, promoting an overall sense of well-being.

-Endorphins - These are our natural pain and stress chemicals known as neurotransmitters. Cacao stimulates the secretion of endorphins, which can help to produce a pleasurable feeling.

- Phenylethylamine (PEAs) - PEAs are a natural chemical compound that are also created within the brain and released when we are in love. It acts as a mild mood elevator and an anti-depressant, and it helps increase focus and alertness.

- Anandamide - Anandamide is known as the "bliss chemical" because it is released by the brain when we are feeling happy. Cacao contains both N-acylethanolamines that are believed to temporarily increase the levels of anandamide in the brain and enzyme inhibitors that slow its breakdown. This promotes relaxation for a longer period of time.

The Aztecs knew of the virtues of cacao and called it 'heart blood'.. Enjoy...

J Anders
Posts: 171
4
posted 1 year ago
Another old post that's worth bringing back up to the top. I've printed out my own copy- maybe my wife will use it!