Dale Hodgins
Posts: 9002
Location: Victoria British Columbia-Canada
670
posted 2 years ago
I often find myself living in perfectly nice houses, that have had the electricity shut off. But quite often I have a cord running from a temporary power pole or from the neighbors.

Necessity was definitely the mother of invention on this one. I found myself at a job site with only an electric kettle and a bag of food which contained, some already cooked chicken, potatoes, sweet potatoes, carrots, sunflower seeds, peanuts, a small amount of butter and old cheddar cheese. I thought about nibbling on all of these things and then realized that I had a perfectly good cooking vessel in front of me. Until then I had only used it to boil bathing water.

So I boiled some water and got the dry seeds going first and then everything else. It works great. No need to stir, since everything reaches a rolling boil and just goes round and round.

This is probably the most efficient electric cooking device, since it's very easy to turn it into a hay box. I got mine up to boiling temperature and then when it kicked off, I covered it with a blanket and left it for half an hour. I came back to perfectly cooked soup. 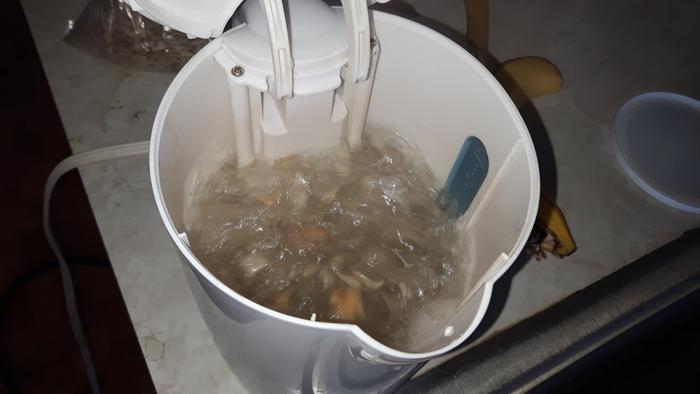 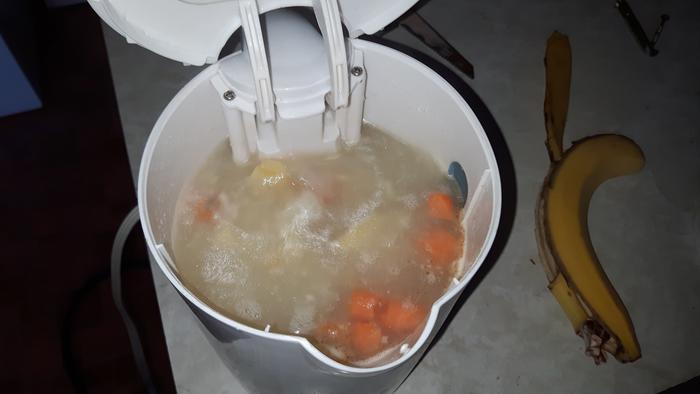 posted 2 years ago
Oh glad you had the banana peel, I was beginning to get confused :p!  There's an entire section of the internet devoted to instant pot cooking--it's become a religion practically!--so you can find more recipes.  Maybe they'd go for the haybox add-on.

I think it's a facebook group, instant pot cooking.

Dale Hodgins
Posts: 9002
Location: Victoria British Columbia-Canada
670
posted 2 years ago
My favorite thing, is that it's self cleaning. I give it a rinse, then use it to heat  bath water, and it's perfectly clean again.

Sometimes, during cold weather, I move into a walk in closet or other very small space. The kettle becomes my hot water heating. I don't want heat when I'm sleeping , just a bit while  I'm using the phone or doing other things. At any point in the night I can hit the button, but it shuts off again, so that I don't have anything running while I sleep.

It would be very easy to make it a double boiler, if I find is suitable stainless steel container to slip inside. This would allow the reheating of foods that I don't want to be wet.
Dale Hodgins
Posts: 9002
Location: Victoria British Columbia-Canada
670
posted 2 years ago
I'm at a public park and somebody left the power box unlocked. I'm going to take it to mean that this is available for public use. I may be wrong. So I'm cooking some green beans.

I have a small insulated container that this kettle will fit into. It would be fun to make soup at Starbucks. I'll cut everything up and get it in the container, along with water, then just walk in as usual, set myself down and plug in my phone, as I always do. Then I'll plug in my luggage. I'll switch it off just as it boils. Me and Al Capone. Throwing caution to the wind and breaking the rules.
20180610_183653.jpg 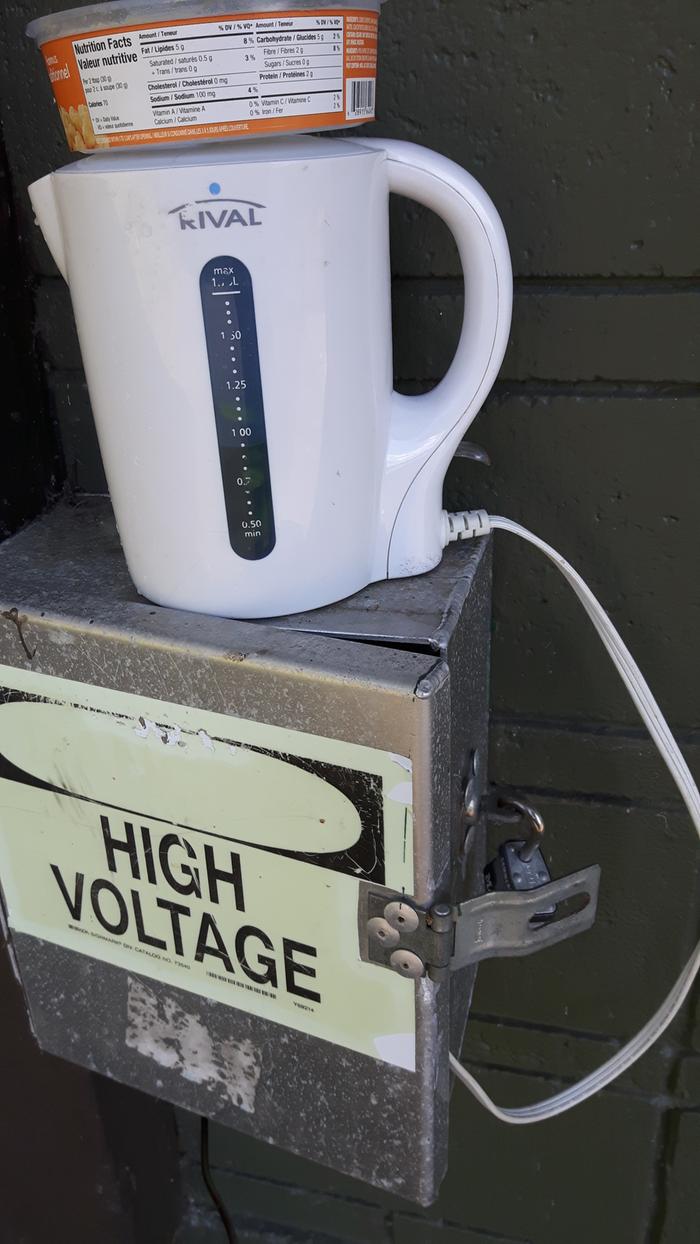 Dale Hodgins
Posts: 9002
Location: Victoria British Columbia-Canada
670
posted 2 years ago
That spot in the park continues to be a source of power when I need it. But I've been in nice houses for a few weeks, as I prepare them to be moved.

I have made a variety of foods as exhibited by the photos below..

I've made turkey soup a few times. Along with the turkey, I use lots of ingredients from the organic food store. Quinoa, sorghum, French lentils and hemp seed, along with a mixture of Indian and Italian spices. I get my salt from soya sauce.

I always start out with the meat if it's raw. If I'm working with cooked meat, then I start with the dry grains. I run the kettle until it boils and then just leave it quite a while for the grains to soften up. Then the vegetables go in. I usually get three meals from a kettle full of this stuff.

I've had such a good access to electricity lately, that there's been no need to try making soup at Starbucks. But that's coming..
IMG-20180720-WA0003.jpeg 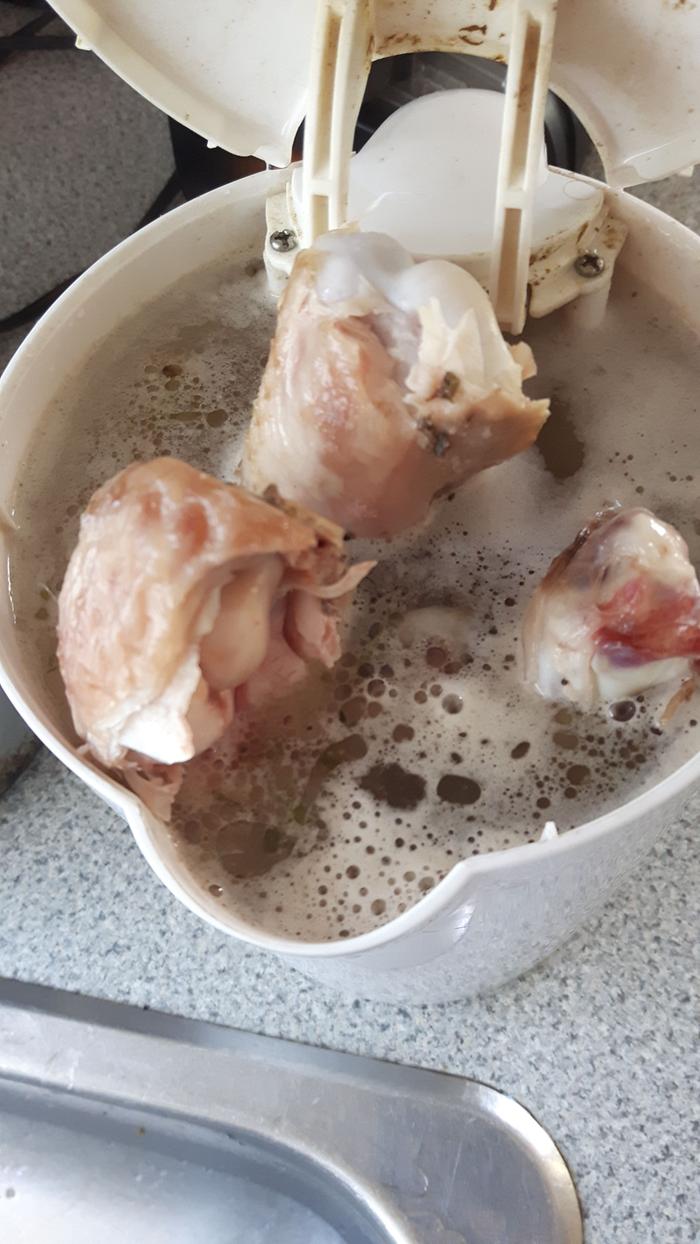 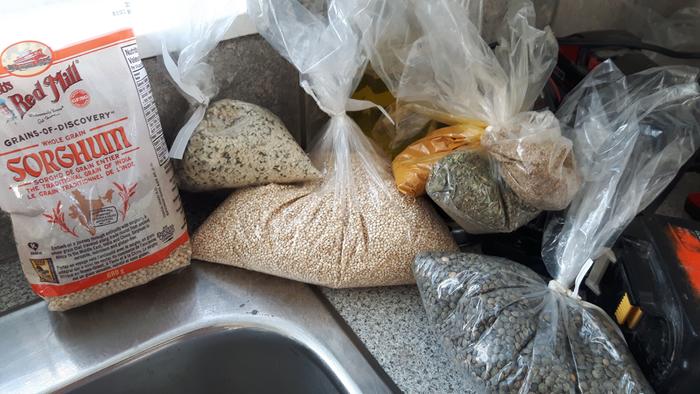 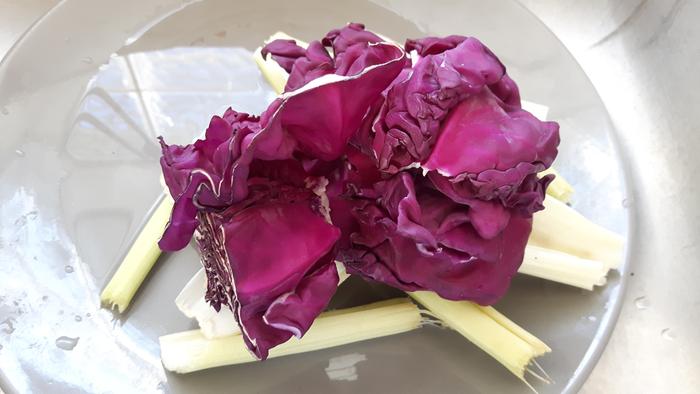