How accurate is this cheese map?

Since I'm traveling to Europe soon, I'd like to know if this cheese map is any good. Also, if you have any good cheeses of this list (or any other) to recommend as well, I'd be very thankful! 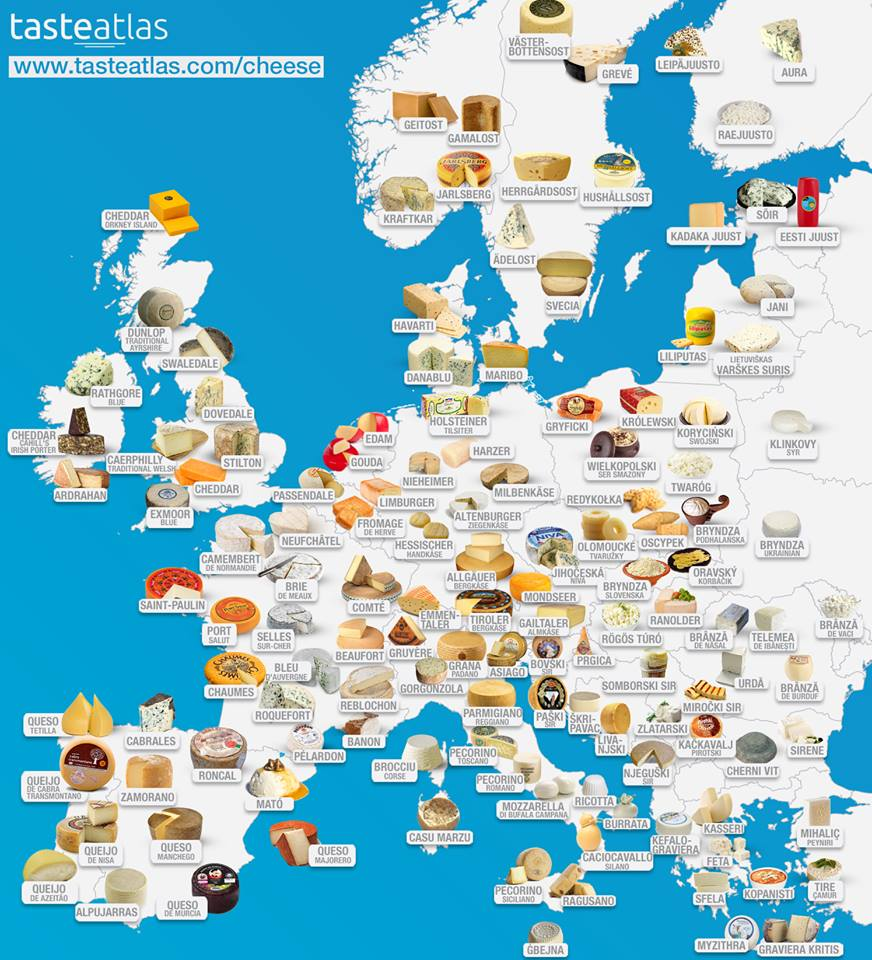 posted 2 years ago
From what I can tell, it's accurate. I'm half Danish, and I have fond memories of going to Denmark as a child and having real Havarti. This pre-sliced "havarti" in grocery stores here in America makes me sad. I also grew up with Jarlsberg being a staple in the fridge, and it's still made in Norway, imported, and in my opinion hasn't changed. It's also delicious. I do wonder sometimes if the Norwegians have a Jarlsberg for export and a Jarlsberg for themselves. I think Whole Foods has a good cheese section, and it's where I discovered Swiss Emmentaler (it's real "swiss" cheese, the kind full of holes), and Gruyere. Both are so nutty, creamy and delicious as well.

posted 2 years ago
Hi! - For some serious aroma, try Mohant in Slovenia. I'd say Raclette also definitely deserves a mention. And... So many more... Now I'm hungry

J Grouwstra
pollinator
Posts: 127
Location: Fryslân, Netherlands
52
posted 2 years ago
I can only speak for The Netherlands and a bit for Britain.
For The Netherlands Gouda and Edam are listed, those are two mass produced cheeses with a big export market.
Cheddar is listed a few times on the British Isles, it's very common over there.

Probably the map just lists some common, mass produced cheeses per country. There wouldn't be space for more. The map isn't inaccurate, but as a travel guide through cheese land I would find this hugely unsatisfactory. You could also make a beer map, stamp The Netherlands with Heineken, Ireland with Guinness, Denmark with Carlsberg and leave it at that, but then you would ignore heaps of small breweries that make nicer, more special beers. Same with cheese; there are lots of small cheese factories that make special cheeses, but they are too small to appear on a map like this.

If you're travelling, it makes sense to discover the local markets. You won't get your best info on the web. Try visit farmers markets, shops specialised in regional delicacies, ask local people...
And don't travel criss-cross over the map of Europe in an attempt to do as many countries as possible, as then you'll probably end up visiting clichés and there won't be much depth to your experience.
Nathanael Szobody
pollinator
Posts: 447
Location: Boudamasa, Chad
109
posted 2 years ago
I can vouch for the French part: accurate and tragically incomplete.

posted 2 years ago
My experience her is VERY limited, so I'll just make a point about the one thing I know in this area:

At least one of the cheddars pictured in Britain should be white (or at least LESS orange) - modern cheddar wasn't the bright orange color until much later after it's inception, when food producers colored it with annatto seed extract to deepen their hue.