Starting my forest in desert

Jas Foley
Posts: 5
1
posted 3 years ago
I have 10 acres, but due to deer and rabbit populations nearby I decided to chip off a 70x70 chunk to start with as a nucleus. All sand, about 8 inches down is hard pan, my question is, if I plant honey locust and black locust trees in this area to get the ball rolling, how effective will they be at breaking up the hard pan?
Nick Kitchener
pollinator
Posts: 794
Location: Thunder Bay, Ontario, Canada
127
posted 3 years ago
Hard pan clay, sandstone, or granite?
Jas Foley
Posts: 5
1
posted 3 years ago
Hard packed sand, basically sand stone. The junipers are able to break through, any idea if my trees can follow suit?
kevin stewart
Posts: 176
19
posted 3 years ago
Out of 40 acres i set aside a 320 foot square. Of that i hardly use a 100 foot square. Cows are making me a rabid environmentalist and I've fenced off about 16 acres.
My hard clay is generally at 18 inches. Yucca can burrow down and i think my Arizona Cypress are doing okay (2+1/2 years in the ground.)
This year I'm growing Siberian elm, Palo Verde, mesquite and acacia. Those that are strong enough go into the ground this December. The trees are dormant and have till March to acclimate, a lesson hard learned.
You will need to wire your trees against those rabbits. I also cover the wire with shade cloth. 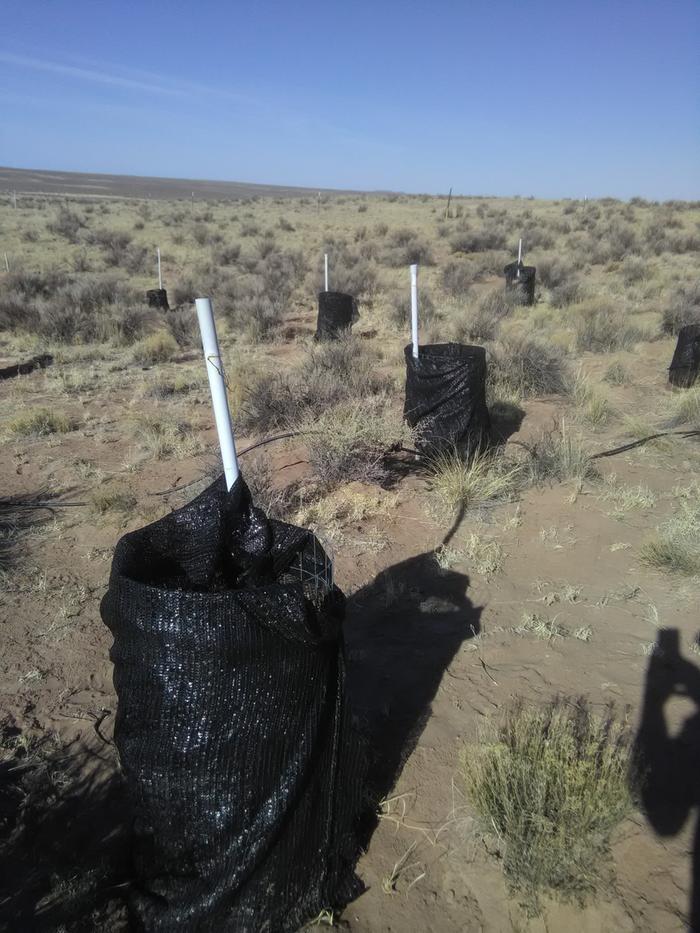 posted 3 years ago
Trees that grow in place from seed (without disturbing the original roots) are almost always more hearty to the environment, better adjusted and with stronger roots.  Is this an option for you, in this environment?

Tree roots can do some amazing things.  It's almost certainly worth trying. 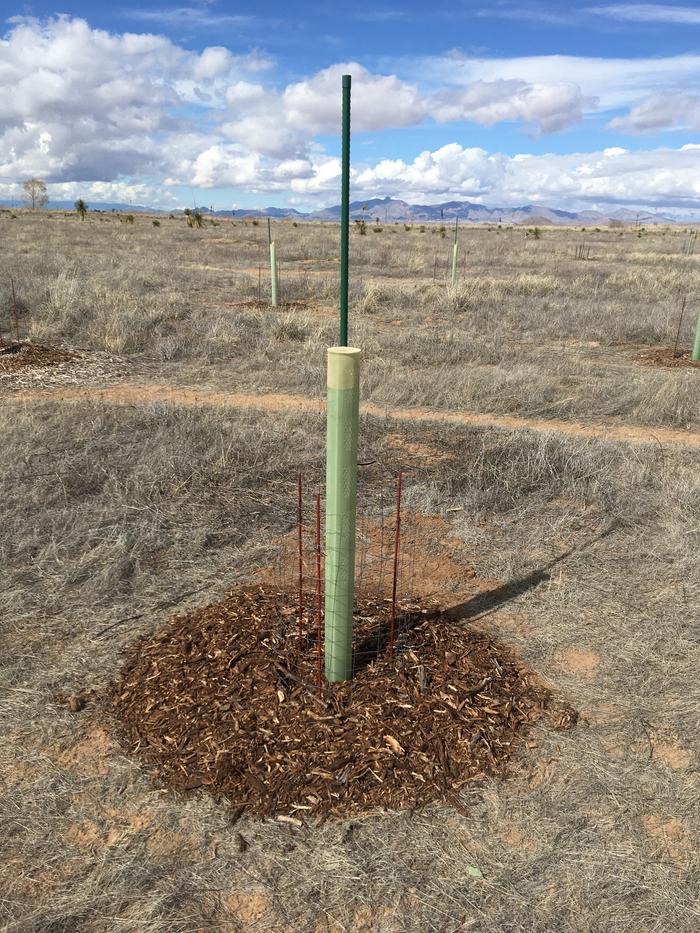 Robert Rafferty
Posts: 2
posted 3 years ago
Great information, heading south from Chicago down to West Texas within the next couple of months to set up the homestead, and Greening the property is it big part of that. Great to hear your successes, thanks for sharing
Chris Kott
pollinator
Posts: 3842
Location: Toronto, Ontario
553
4
I like...

posted 3 years ago
Hi Jas. You should be commended for taking on such a project.

Are you doing any digging? I like crater gardens or zai pits or crater hugelkultur, whatever version fits what's around you.

Have you tested the soil yet? Are you willing and able to add small amounts of amendments? Adding some clay to the sand can help with moisture and nutrient retention, and organic matter is just necessary for soil life to eat. But one thing at a time. You need to be able to keep moisture in the soil for there to be soil life.

Also, where on your property have you placed that nucleus? Keep in mind that the area next to benefit from any water and sediment-trapping changes you make is literally the one down plume from you, as in the spot downstream of you, in terms of subsurface water flow.

If the wind usually blows from the northwest, I would situate my nucleus as close to my northwestern corner as practical. Expansion of my green zone would occur along the perimeter of the nucleus, but would proceed fastest in the direction of that growing plume of ground water.

If there are rocks available, I would stack them into a dry-stack wall at least knee-high to the northwest of my nucleus, such that the airwell formed would trap moisture out of the air. I would also make a double-stacked mulch layer atop the sand surrounding the planted zone right up to the plantings, such that the sand is shaded, and that a shaded underlayer of rocks again traps moisture from the air.

You might consider wind barriers if wind dessication is a problem. A variety of barrier options can be made from local scrub, from things that resemble wattle fencing to barriers of piled scrub stuffed between paired posts set in the ground.

In addition to slowing or blocking the wind, this would also have the benefit of trapping windborne particulates, which would eventually become soil in the new system. It would also shade the ground underneath and provide shelter and habitat for wildlife, whose scavenging and then defecating in the scrub barrier would also build soil, if it can be kept from the wind. Paired with an airwell wall, I wouldn't be surprised if the scrub barrier itself became a tree nursery.

As to the larger question, what is the water table like where you are? Is is possible that the taproots of trees that will grow there can make it down to the water table themselves? If that is the case, what is needed is for one of those choices to engage in what is known as hydraulic lift, where the tree acts as a pump to lift water from the depths for itself, which other trees and plants can use. I know at least one variety of maple does this up here, but I don't know what your options there, if any, would be.

As to the actual start, after you've gotten some physical shelter to nurture young plantings along, I find that it makes the most sense to start from the soil up. Assuming that the soil has been amended, at least in spots, to be able to retain moisture and nutrients long enough to grow your local pioneer plants, I would start with a hardy shrub, preferably nitrogen-fixing, and everything that grows in its shelter, and just emulate the local succession, or an analogue of it, should there be no convenient example of desert to forest transitionary zone in your area, making substitutions for the local flora where it will work better for you, including the black or honey locust trees.

As an aside, why do you want both?

Jas Foley wrote:I have 10 acres, but due to deer and rabbit populations nearby I decided to chip off a 70x70 chunk to start with as a nucleus. All sand, about 8 inches down is hard pan, my question is, if I plant honey locust and black locust trees in this area to get the ball rolling, how effective will they be at breaking up the hard pan?

Most trees can work their way through hardpan or even rock.
If you don't plan on always having a growing stand of Locust trees, then honey locust wins over black locust.
Black locust is like sumac, it will put up new trees from the parent tree's roots, everywhere, and you will work long and hard to get rid of it once it has established.
Most people that plant black locust end up cursing the day they did it because if you want something like fruit trees to replace it, good luck, black locust has allopathic tendencies.
The one plus side of Black Locust is that it makes long lasting fence posts.
Honey Locust is just a little more friendly than its cousin, it is much slower to spread but it will spread if given enough time.

Dana Denton
Posts: 1
posted 3 years ago
You need to look up what is natural to that environment.  There will also be small plants that are indigenous to the area as well.  Any tree that bears fruit that is indigenous will help the eco system, ie birds insects etc all must be healthy for the environment to heal and become bio diverse. Good luck.
Xisca Nicolas
pollinator
Posts: 1981
Location: La Palma (Canary island) Zone 11
2
I like...

Bryant RedHawk wrote:Most people that plant black locust end up cursing the day they did it because if you want something like fruit trees to replace it, good luck, black locust has allopathic tendencies.
The one plus side of Black Locust is that it makes long lasting fence posts.
Honey Locust is just a little more friendly than its cousin, it is much slower to spread but it will spread if given enough time.

I grew up near a little black locust wood.... it gives super honey but also edible flowers!
I would mention that it is toxic to animals, as only flowers are safe to eat.

I am tempted though.... mainly for having posts!
Who knows where is the most southern location ever tried for black locust? Any risk of spreading in non watered areas?

Is honey locust better in the south? Is it edible for animals? And is the wood also suitable for posts?