building a green house by the sea

Judging from all the youtube posts, I noticed that quite a few of the people do not live close to the ocean( with the possible exception of Washington state).

My parents are planning to build a home to retire in, in Cape Agulhas South Africa. They will be a 150 feet away from the Atlantic, in a winter rainfall zone, so there will be moisture content in the air all year round with low evaporation during the rainy season.

Does anyone have any advice on what type of buildings/ building materials would be suited for a spot like this. Normal commercial bricks are popular, but have to be bought and brought from over 500Km/ 300 miles away, at great expense. A lot of other building materials do not stand the test of time.

Costs and maintenance are an issue as they won't have the energy or the means to have lots of either, so ideally something that is relatively cheap but will last a long time.

An earth berm/green roof building would probably appeal greatly to my mother but I don't know if it would be suitable. The house will face South (the ocean), while the biggest part of the roof will face North to take advantage of of the sun (being in the Southern hemisphere).

Luckily green energy is not a problem as one of my cousins is an electrician who specialises in renewable energy installation (and will hopefully give me a discounted rate!!).

Any advice would be appreciated

Posts: 2482
Location: FL
112
posted 9 years ago
Over here in the US cement fiber sheets and planks have been available for several years.  I'd think it would be available somewhere in SA.  Look for the name Hardiboard, Hardiplank or do a search with some combination of cement/fiber/panel/plank/board.  The cost is around 50% more than plywood over here.

This sheet/panel product is formed in 4x8 sheets, 1/2" thick, with a face appearance similar to wood grain.  The planks also have the wood grain.  I've not worked with the planks in some time, I believe they are about 8" wide, 16' long.  The stuff is impervious to water, extremely fire resistant, wont rot, and you'd need a pretty big bug to do damage to it.   For the environment you described, this material would serve your needs very well.  Paint as you would wood, it should offer all the protection from humidity and moisture you ask for.

The product looks great and holds up to the elements.  There is a disadvantage-it does not hold up well to impact forces.  It will take a baseball as long as it is not thrown by superman.  It will hold up fine to stone thrown by a mower.  If you try real hard, you can drive a stud through it, but you may need a running start.  I've used the stuff before.  Sheathing the structure with OSB or plywood followed by a moisture barrier will make the wall practically indestructible.  Connect with nails or screws.  Caulk the seams.

Have a look at Durock.  Same sort of material, but without the wood grain face.  This would be suitable for floors or walls which would be covered with tile.  I've used it in dozens of bathrooms as a wall backing around the tub/shower.  As a backing for tile, Durock cant be beat.  Also have a look at Hardibackerboard.

Tile would hold up for you, but can also get pricey.

This is a side of my brother's place being redone with the hardiplanks as clapboards.  The trim around the windows and corners is made out of the same stuff.  Cuts with a skillsaw. 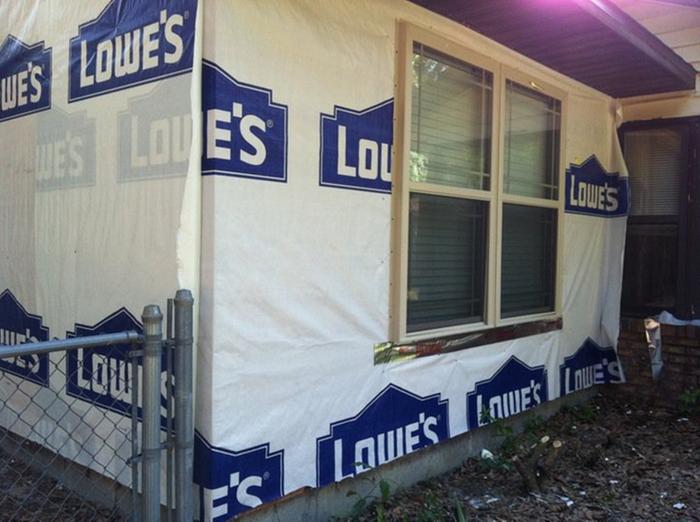 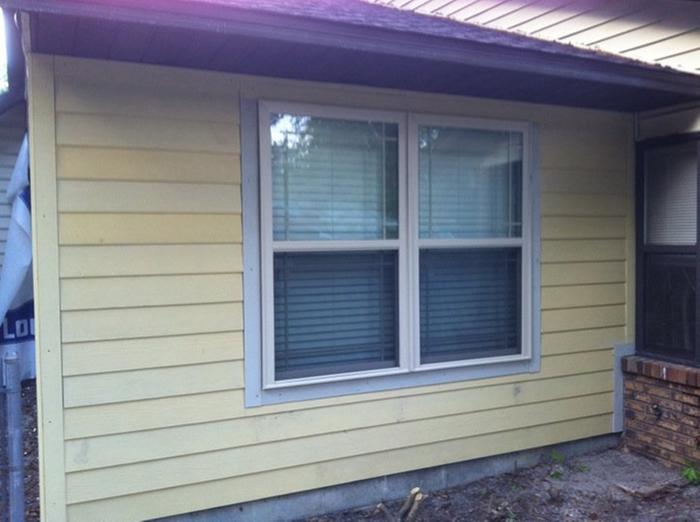 Dale Hodgins
Posts: 9002
Location: Victoria British Columbia-Canada
676
posted 9 years ago
It would be interesting to know what materials the native people of your area traditionally used. I imagine it may have been some sort of cob or wattle and daube material. Determining what was traditionally used may be a good first step in choosing something appropriate. You'll want to resist the temptation to hermetically seal yourself inside an airtight envelope. We tried this in coastal British Columbia and Washington state with disastrous results.
Posts: 2
posted 9 years ago
Thanks for the replies, I hadn't considered either options.

Yes there is a similar product to hardibord available in SA, I don't know if it will be as effective as the US product though.

I don't know how long the traditional houses lasted, but there is probably a way to marry it with new techniques to extend the life of the building.

If you have access to portland cement locally, and sand and clay are in the soil on the property, you might consider building using Rammed Earth.  That's what the Romans built most of their things with.  Take note they are 2000 years old and still standing.  So, it's a pretty decent method of construction.

In New Mexico and Arizona here in USA, there are some builders who focus only on that technique. They use pneumatic rams to compact the earth and using them is actually not as good as manual by hand method unless you take your time (more money if you hire a contractor).  The commercial method promotes voids, the manual by hand method is considerably less noisy and you can then hear the earth "sing" when it is compacted to the level it needs.

Rammed earth is in simple speak, making instant rock.  And over time it gets stronger and stronger.  If you are building the manual by hand method as soon as you finish a single course (using slip molds) it is already strong enough to raise the molds and do another course.

Takes very little water and not that much cement.  It is a labor intensive thing but, the results are as permanent as solid rock!

Thomas Jefferson built Monticello out of rammed earth using limestone and ash I think it was (they didn't have portland cement back then). Rammed earth has only recently (within the last 100 years) vanished from consideration due to commercialization I think.  It's DIRT CHEAP in terms of materials.