Fish in a barrel

Ken W Wilson
pollinator
Posts: 1158
Location: Nevada, Mo 64772
98
posted 1 year ago
There is a very old article about growing catfish in a 55 gallon barrel. I'm very sceptical that it is possible to grow more than a couple fish that way. Has anyone tried it?

I bought two blue water storage barrels at a yard sale. I'm Not sure what size they are, at least 40 gallons, I think, maybe 55. I thought I might use one for sort of a long term live well.  I have places I can catch fish. It'd be nice if I could keep some alive at least a week so I could eat them fresh instead of freezing them. It'd be even better if I could actually grow a few out over a couple months. Does anyone have suggestions on what equipment I'd need and how many pounds of fish I could keep? I'll probably try it, even if it's just an overnight thing. I don't like to fish late at night and then clean fish. Tired and sharp knives isn't a good combination.

posted 1 year ago
I use a cattle trough tank as a give and take for minnows since its a long trip to buy them relative to my fishing hole. It works well as it is also a mosquito trap because they eat the larvae. They reproduce, they get large, and they need no inputs(food, aeration,  etc) except keeping the water full. I also scoop out a bucket of water for my garden. Several benefits of doing this.

I can see keeping catfish for a few days. I don't see raising them to get bigger. I suppose it can be done. I think a hormone is released that says hey, i'm too big for my surroundings and they dont grow. This is resolved through filtration. The question would be how elaborate of a system are you willing to create. I would think that it would be more cost effective to move up to a larger (500+ gallon) tank that would not need filtration over a 50 gallon tank that needs it. Then I would start very small as far as numbers.

Ken W Wilson
pollinator
Posts: 1158
Location: Nevada, Mo 64772
98
posted 1 year ago
I was thinking of an a aerator in the barrel but no filter. Maybe partial water changes.

I'm afraid to go too big with the tanks because my town has bee active code enforcement. I think I can get away with a barrel.  I've thought of trying a small stock tank.
Tyler Ludens
pollinator
Posts: 11799
Location: Central Texas USA Latitude 30 Zone 8
1044
I like...

posted 1 year ago
Bluegill will grow to  pan size in a small fish tank, but I don't know about Catfish.  I had bad luck raising Catfish (they got sick, died, and killed everyone else) but had good luck with Bluegill (until I tried to add Catfish to the system).

Ken W Wilson
pollinator
Posts: 1158
Location: Nevada, Mo 64772
98
posted 1 year ago
That’s good to know about the bluegill. I had thought catfish would be much hardier.
Dan Boone
gardener

posted 1 year ago
I keep goldfish (carp) in 55 gallon barrels in my garden as part of a system to eat garden waste and insect larvae and produce nutrient-rich plant-watering water and biosolids (sludge) that are nutrient-rich inputs to my soil-creation efforts.  They thrive but do not grow to meat scales at any reasonable speed.

I would sure enjoy seeing that article about catfish in barrels if anybody has the link.

I can't find any story about anyone trying it. It seems too good to be true.
Dan Boone
gardener

posted 1 year ago
That sounds like a very fiddly procedure with a lot of daily attention.  I'm into systems that are more self-maintaining, honestly.  But it's interesting!

Ken W Wilson
pollinator
Posts: 1158
Location: Nevada, Mo 64772
98
posted 1 year ago
Yeah! I was thinking that the same sized barrel with a lot less fish might need a lot less attention.
Ken W Wilson
pollinator
Posts: 1158
Location: Nevada, Mo 64772
98
posted 1 year ago
I don’t see it being worthwhile or even successful in the way the article states. I think I might try it as mainly a temporary holding tank.
Jon Sousa
Posts: 35
Location: Willamette Valley, Oregon
3
posted 1 year ago
The best fish for "in a barrel" is tilapia. A friend raised tilapia successfully in a small hydroponics outfit he made. They will continue to grow in what looks to be extremely crowded conditions as long as they have ample food supply. Store bought food is extremely expensive. I'm thinking the best food would be to grow your own bugs. Look at https://permies.com/t/92739/critters/Raising-Cockroaches. You will want to either have a way to drain water out of the bottom or siphon it out at least once a week to clean out the poop to use in your garden.
Nicole Alderman
master steward

posted 1 year ago
I asked my fishkeeper husband, he says:

"Your idea to use it as a holding tank rather than a rearing tank is spot on. Just new water and an aerator on day of catch will do for 2 to 3 days carefree.

To raise fish in there, you could easily plumb an overflow and use a timer to do daily water changes. Sponge filters are the best choice, for any tank. People usually do this with the barrel sideways so the fish can move. The key to growth is not heavy feeding, but water changes.

There are a million ways to keep fish, and it sounds like you know a lot already.

Just for kicks, here are my 135g and 75g tanks. Each tank is filtered with nothing but two sponge filters, and a lone emergent pothos vine. One coarse (airstone), one fine (powerhead). I even got a shot lengthwise through both tanks. Crystal clear water and healthy fish and water parameters. Fancy filtration is a waste of money and time. The fish don't benefit. 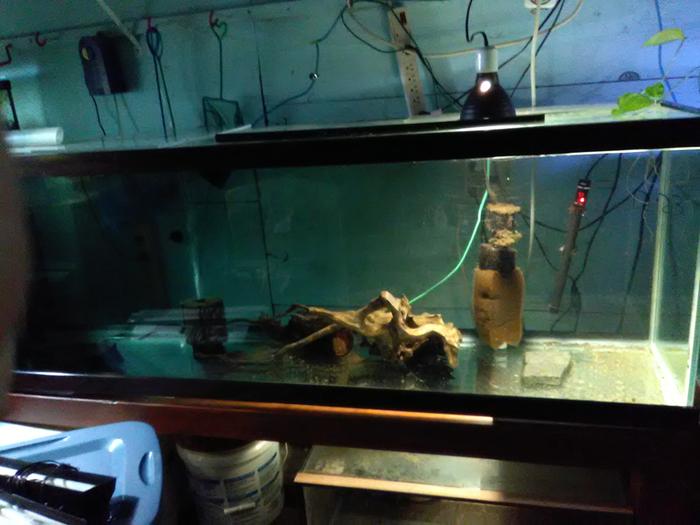 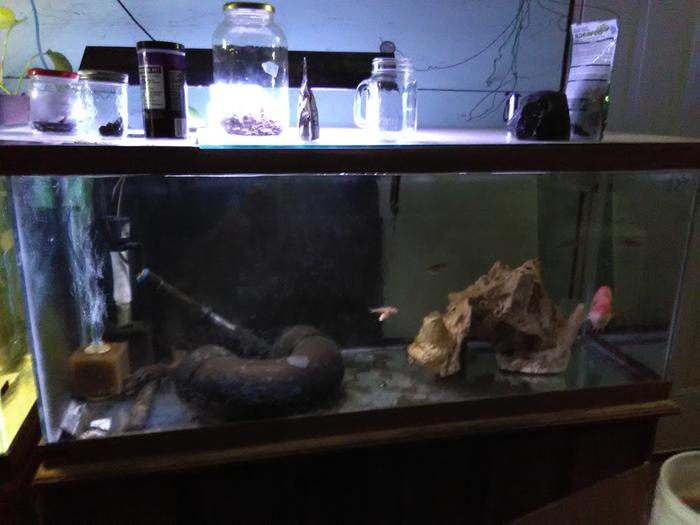 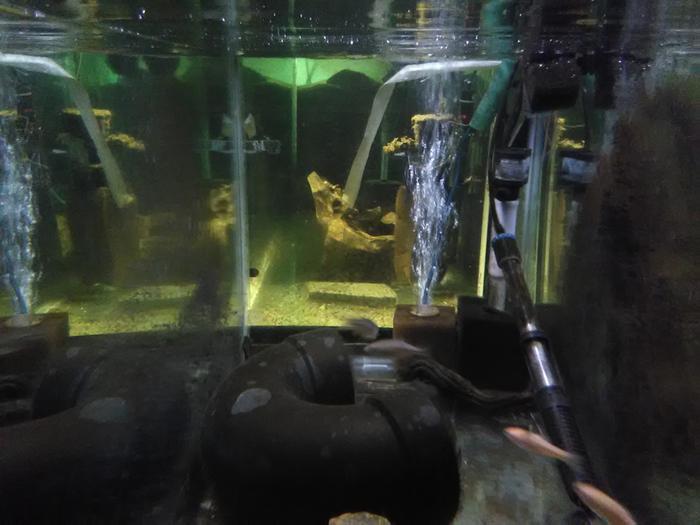