J Grouwstra
pollinator
Posts: 129
Location: Fryslân, Netherlands
53
posted 2 years ago
I'm only gardening since a couple of years now, still needing to look up basic info on this or that plant that I'm growing. But often I notice that my plants behave in a way that the textbook didn't prepare me for, or sometimes the textbook seems plainly wrong.
Especially when plants show more longevity than expected or a procreation method that is new to me I'm pleasantly surprised, and I believe it's worthwhile to share here a few things I found out, because if I missed the info before, likely other people did too. Or perhaps other people know of examples that compare to the two examples I'm posting below... 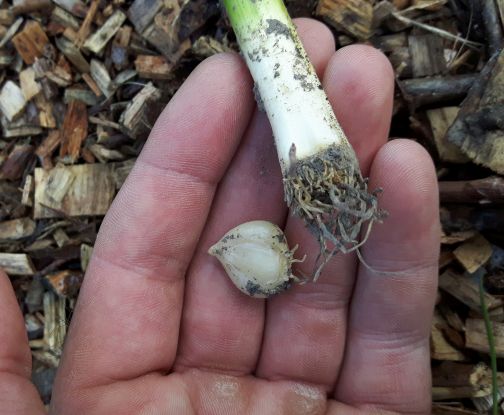 This is not the leek that's called perennial leek, that's a different strain, but this leek had made a bulb resembling those on perennial leeks. I was surprised when I found this bulb on a forgotten ordinary leek - the leek had already made a seed head. I had another old leek standing in the garden, I checked and found a bulb on the foot of that one too. I've left this leek standing, and now you can see a new leek forming from the foot of the old one: 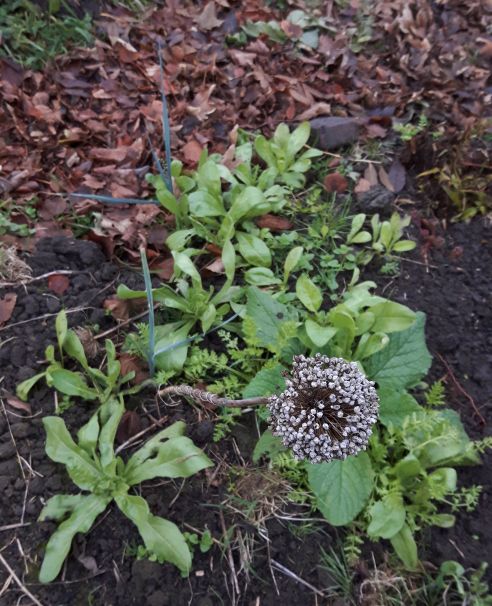 A different veg: Cavolo Nero, maybe you call it Tuscany kale, maybe Palm Kale, maybe different even, but this is how this kale commonly looks like (not my own kale): 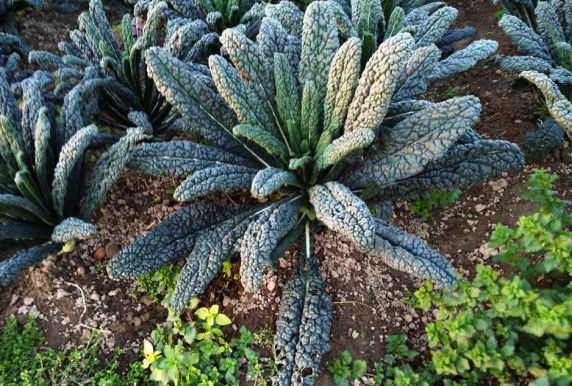 As I like to save my seeds, I let this kale overwinter and go to flower. When I was harvesting the seeds, I already saw young leaves sprouting from the old stem of the only plant I had spared by that time. So I left it, and it has now turned into a multi-stemmed kale. While last year I hardly had a harvest from a small row of plants, as the plants had remained small and the slugs had had their takings as well, this year I'm having a decent harvest from only one plant: 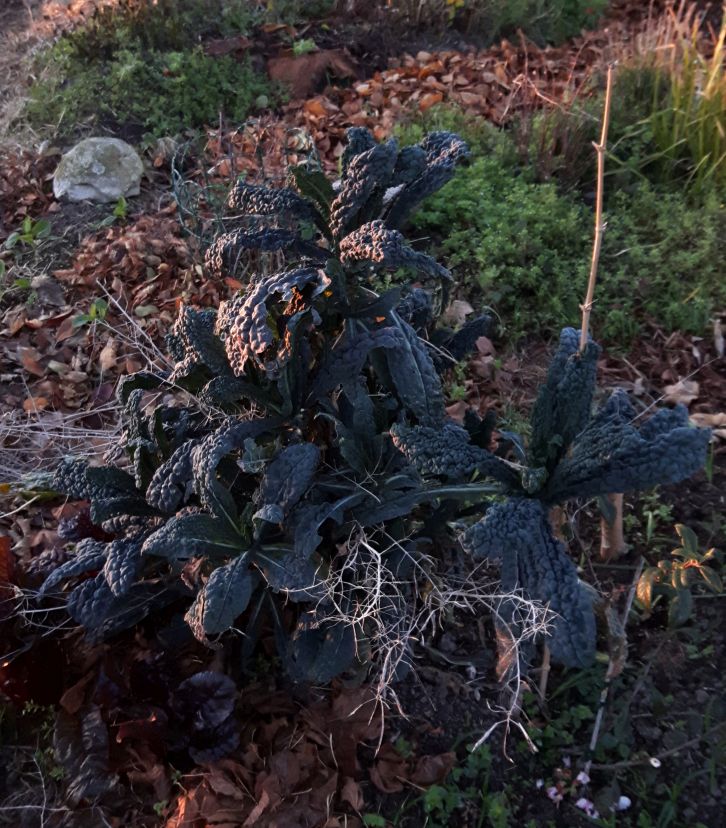 This looks like a perennial, while if looking up this plant online, you'll likely see it described as a biennial.

A leek just making one bulb, and only after letting it go to seed, might not be too interesting from a practical point of view. The Palm Kale booming in size after leaving it in the garden definitely seems interesting to me.
Deb Stephens
pollinator
Posts: 643
Location: SW Missouri, Zone 7a
128
I like...

posted 2 years ago
Many plants listed as annuals in seed catalogs and in nurseries are actually perennial in their country of origin. They are simply treated as garden annuals where they are not hardy year round. For example, we have some hot pepper plants that are over 10 years old and producing abundantly each year although we live in USDA Zone 6b-7a where they should die off in winter. The reason is that we bring them inside to a cool room in winter and allow them to go dormant as they would in their original homeplace. In the country of origin, they would be long-lasting shrubs.

Many other plants that are, indeed annuals or biennials, will reproduce through seeds so that while the parent plant is dead (or resting) the seeds will sprout in place to form new plants. An example of that is our Malabar spinach -- a tropical vining plant we've had in our garden for at least 15 years -- which dies down every fall when the weather gets cool, then pops back up and spreads luxuriously from the seeds it dropped in the previous summer.

One other way that non-perennial plants often appear to be perennial is when they are cut to the ground before they die so that the warmer roots (warmer because they are insulated from cold air down in the soil) merely go dormant and then send out new growth in the spring. A lot of brassicas (such as your kale) will resprout that way.

I think the takeaway lesson is that if we can duplicate some of the conditions in the country of origin (like adding warmth in the form of a greenhouse or bringing indoors) or do some other thing to maximize survival of tender roots in situ (like deep mulches) a lot of so-called annuals will become perennials for us even in cold climates.
lesley verbrugge
pollinator
Posts: 138
Location: 48°N in Normandie, France. USDA 8-9 Koppen Cfb
56
4
I like...

posted 1 year ago
We sowed 40 Cavolo di Nero Kale seeds in August 2017. A few flowered in 2018 but the majority waited until 2019. Most of those died off after flowering, but four of them sprouted and continue to grow giving us a harvest of smaller but still welcome, leaves.

We also have a 'volunteer' runner bean 'Czar' which has reappeared for the third year, and gives us more beans every year. I had heard these were perennial if the winters were mild, but that year on year the yield falls. This has not been the case for this particular plant. I top dress with compost and straw mulch just in case winter is harder than usual.

I have a summer cabbage from 2017 that never went to a head, and instead, is multi stemmed and continues to produce leaves for picking. I don't have much success yet with growing cabbages to a single head, but am trying different locations, and anyway, quite content to graze smaller leaves on an ongoing basis.

Still kind of on topic - if you find it hard to eat loads of kale (or cabbage, for that matter) try Hugh Fearnley Whittingstall's recipe: we put about 50 small/med Cavolo leaves (ribs removed if they're tough) into a steamer with 6 peeled cloves of garlic. Steam till tender - about 10 mins. Then put into a food processor with about half a cup of olive oil (less makes the puree firmer, more makes it sloppier so add what you like), one quarter of of lemon (flesh, pith and peel) salt and pepper to taste. We liked it mashed potato consistency and we eat loads of it. If you use cabbage leaves the flavour is more 'delicate'. This mixture freezes well - I fill small silicone moulds with the puree (or you could use icecube trays) and then put some into a piping bag and pipe a second layer on top of the base. Once frozen, i pop them into a container. About 10 minutes in a medium oven till the tops brown slightly, and you have a cute veg/garnish for main dishes or, because of the citrus, they go really well with fish dishes.

There's no way I could imagine munching my way thru 25 cooked kale leaves in one go - but I can happily manage that and more when they're cooked this way!

It goes to seed in spring, and if I leave it alone all summer it grows leaves again next autumn. By the time it’s two years old it’s stem is so thick and woody I have to use a saw to chop it down.

The many seeds drop in summer and self-seed in autumn. When I dig over the soil upside down in Spring (I gave up do dig gardening because grass weeds make it too difficult without mulch), some of those volunteer spinach plants survive and keep growing, even through mulch. Hats off to spinach in my yard, it’s like a weed I can’t get rid of!
lesley verbrugge
pollinator
Posts: 138
Location: 48°N in Normandie, France. USDA 8-9 Koppen Cfb
56
4
I like...

posted 1 year ago
Tim, thanks for posting this, I grew spinach for the first time this year and have been meaning to clean out the 'dead' plants but have been too busy, so will cross that off my to-do list and watch out for regrowth instead!

posted 1 year ago
I also noticed my unharvested regular leeks have started multiplying :)

lesley verbrugge wrote:Tim, thanks for posting this, I grew spinach for the first time this year and have been meaning to clean out the 'dead' plants but have been too busy, so will cross that off my to-do list and watch out for regrowth instead!

I have spinach re-grow in the same spots every year. In fact they spread to new parts of the yard as well because of all the seeds. I basically leave some areas of the yard as a spinach garden where it takes care of itself, along with rocket (aragula), coriander (cilantro), and some weeds which all grow along well together. During summer it all looks brown, dead and withered. Then when the weather cools and rains arrive the area all comes back to life. It’s not as economically efficient because nothing happens there during summer, but for no-maintenance gardening it works well.

J Grouwstra
pollinator
Posts: 129
Location: Fryslân, Netherlands
53
posted 1 year ago
I've found also chard can regrow. This plant went to seed last year - you still see them on the plant in the top left corner of the pic - and the plant died off, but obviously wasn't dead completely. Date of picture is January 13.
It's Rhubarb chard, by the way, which is a red leaved variety.
Chard of course self seeds very successfully as well, so propagation wouldn't be a problem anyway.
Chard.jpg 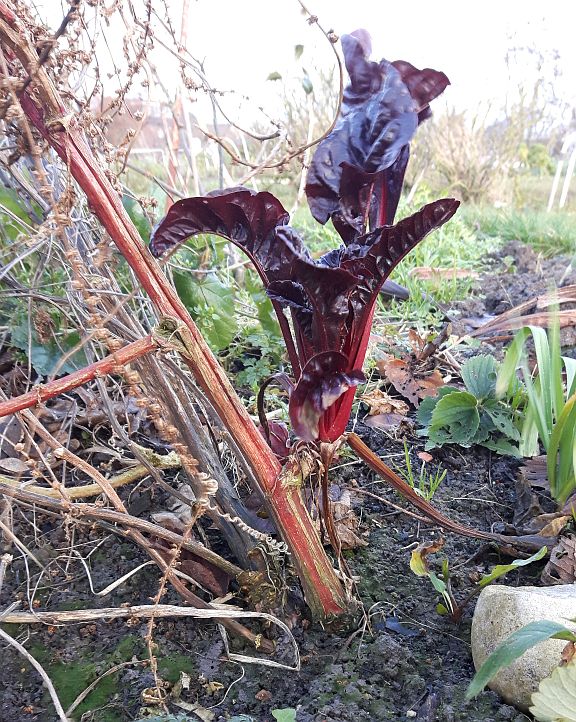 posted 1 year ago
Even where I live Zone 3 and 52 degrees latitude north, and sometimes with minimal mulch, my kale plants overwinter and produce nice greens.  Kale, arugula, and others in that family, as well as many lettuces and peas will self seed and sprout out on their own in my climate.