posted 1 year ago
I've been composting for years and recently discovered charcoal and biochar.  I made up a bunch of charcoal which I'll sprinkle on my compost pile in the warmer months.  Right now my piles are frozen and I'm not turning them; I'll resume in the spring.

Meanwhile I'm collecting my daily coffee grounds and adding a bit of crushed, pre moistened charcoal to the bucket.  My hope is to catch some of the nitrogen off gassing from the coffee in the charcoal thus "activating it" and turning it into biochar.  I figure I'll have a five gallon bucket of the stuff by the time spring comes along and plan to turn it into my leaf mold compost pile to finish it off.

One question I have is what is the shelf life of spent coffee grounds?  My gut tells me that a lot of the nitrogen will quickly off gas but I haven't been able to verify this.

Does this sound like a good use of charcoal and coffee?

I will take a stab at this question but the answers are coming equally from my gut feeling and observational experiences.

I suspect that coffee grounds have a very long shelf life.  The nitrogen is only minimally in forms like ammonia compounds that would be highly volatile.  Certainly coffee grounds are are great sources of nitrogen and they continue to be so for some time even after being added to the ground.  Personally I have picked up coffee grounds from a cafeteria that I know were sitting for months and they were moldy but still a great addition to the compost pile.  I think you are quite safe using old coffee grounds without fear losing valuable nitrogen.

I like your idea to combine these with char to make biochar, and you may save a bit more nitrogen as well, but not because the char is acting like a filter and soaking up stray nitrogenous molecules.  Instead, the char will act like little apartments for microbia that will make use of those precious yet offending molecules.  I say go for it and let us know how it works out.

posted 1 year ago
Like Eric brought up, char will not take in nitrogen from anything (living tissues take in nitrogen). The coffee grounds will be viable for months (most of the nitrogen coffee grounds have is in the bean pieces and isn't going to go airborne easily), molds and bacteria will populate the grounds as they sit.
Biochar is wood that has had all the organic matter either gassed off by heat or it has crystalized into pure(ish) carbon, then bacteria and other microorganisms have populated all the spaces found in each piece of charred wood.

I just wanted to clarify one thing for folks.  As RedHawk and Eric mentioned coffee grounds can hang on to it's nitrogen for a while.  But when it does break down and the nitrogen starts to migrate that is a point when biochar steps in.  For example, any nitrogen that is transformed to ammonia by microbial action can be strongly adsorbed by biochar.  Biochar can absorb something like 90x its volume of ammonia, and yet plants can access this ammonia when the biochar is added to the soil.  Here's one example for some reading in this area: Biochar Adsorbed Ammonia is Bioavailable  This is one of the reasons that adding biochar to compost piles is very beneficial.

posted 1 year ago
Interesting Greg, I did not know that carbon had such affinity for ammonia.

posted 1 year ago
Yeah, if I recall correctly, it packs in between the small sheets of oxidized graphene that form as stacks within biochar, where it interacts with the electron clouds.

Here's a fun story that discusses biochar's amazing absorption and adsorption abilities.  The rat in the story will stick in your head! :)

posted 1 year ago
Good link Greg, thanks for adding that.

posted 1 year ago
Amazing. The solution to sewage problem is embarrassingly simple (Thanks Grandpa Bill)

Thanks for the link Greg

posted 1 year ago
I have access to enormous amount spent coffee grounds. If I can somehow turn this into charcoal and use on my gardens, that would be awesome.

I know how charcoal made in low oxygen combustion chambers. They pile the wood up and cover it with hay and earth. Once the core burns under low oxygen, it turns into charcoal.

If I pack spent coffee grounds in tin cans with couple of holes at the top and burn them, I might have coffee charcoal. I will try this. 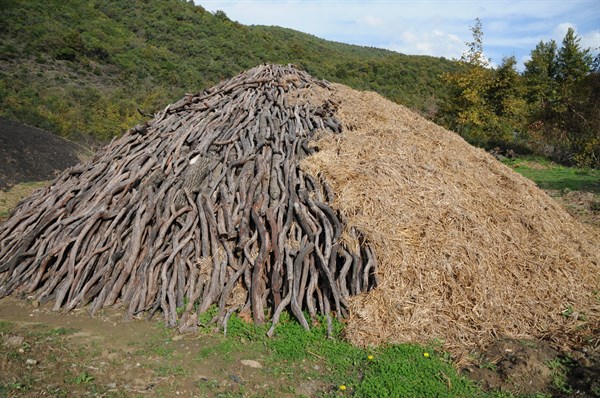 posted 1 year ago
You can just cook the grounds packed in tin cans, I've used twigs wrapped in foil and placed in my outdoor oven (temps can be as high as 800 degrees in it), I let them roast from my lighting the fire until the oven cools down (around 8 hours total).

posted 1 year ago
Rich and Gurkan, I think you both might benefit from drying/allowing the grounds to dry...

Rich, as a more stable storage method... and possibly humidification of dry winter air. I find that my espresso "pucks" if left out (which I catch hell for...) dry in a day or two, and if broken up and spread out, dry even faster! There's a short window where it still smells like "fresh coffee". ;-P

Gurkan, to not waste a lot of heat/time during the charring process... There is another thread on bio char, being made in containers that fit into a wood stove while it is also being used for home heating... nice function stacking!

posted 1 year ago
I don't think I would turn good coffee grounds into biochar. Gurkan, do you not have red worms where you are? Coffee grounds are worm candy with ice cream, whipped cream, sprinkles, cherries, almond slivers, and double-smoked bacon on top; I would turn them into worm castings.

I find that after a week of having largely only coffee grounds dumped into it, my under-the-sink plastic compost bin is pretty well overgrown with mycelia. I would have to store them in a cold, dry location to keep them free of fungi or moulds.

I wish I had access to biochar. I am planning to knock together a rockety backyard retort for the purpose, one that complies with local ordinances covering backyard ornamental burning. I would totally add it into my kitchen bin and the larger one outside, both. Inside, it would probably serve to cut the smell.

Incidentally, I have heard of carbon being referred to as the most promiscuous element on the table; it will bind with anything.

I am currently layering my weekly compost contributions out on next year's garden bed, with a week's worth of my Flemish Giant rabbit's spent paper bedding atop it. It is currently snow-covered, but when everything thaws and the worm eggs hatch, they will seek out the candy and devour it, and I will have terrific soil health.