Leah Sattler
Posts: 2603
57
posted 14 years ago
the first real frost of the fall forced me to pick all my peppers. I prefer to let them get red but I like green peppers too. in fact I like all peppers! They are super good for you too. Peppers are really easy to freeze and don't even require blanching. just chop and toss in the freezer (in a freezer bag of course). I just put 6lbs in the freezer and that ought to keep me happy for a little while at least. I put peppers in everything! 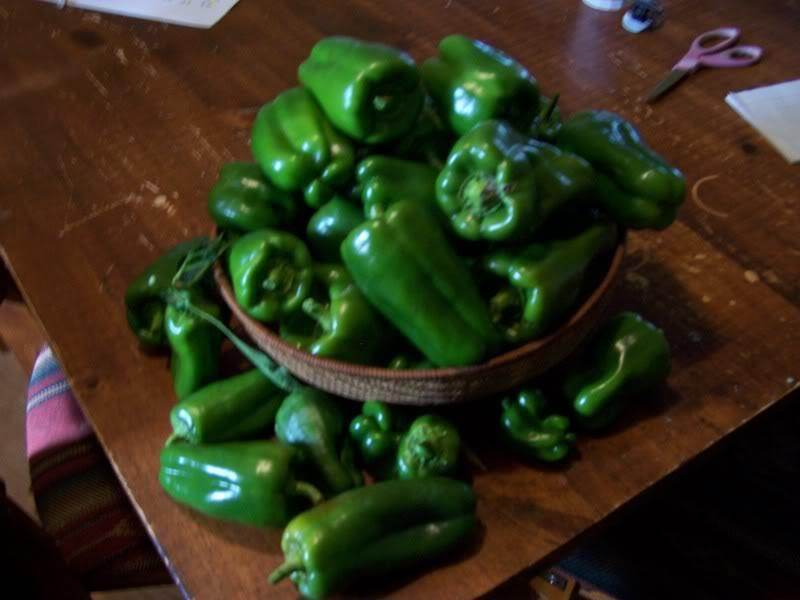 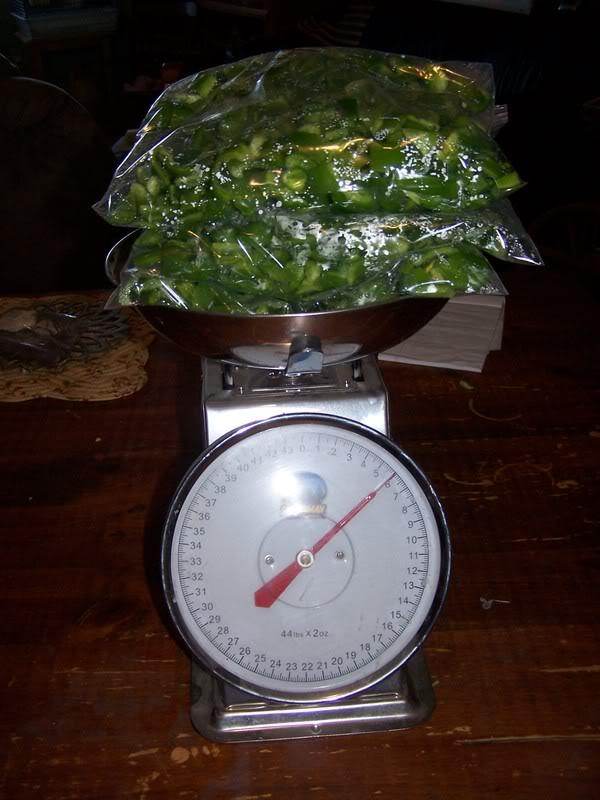 Posts: 40
posted 14 years ago
I only got four green bell peppers this year. Granted I only planted one, and it was my first year growing them.  So I've no idea if that is a good yield.

I did have a ton of hot chili peppers from the one of those I planted.  I'm unsure which variety they are, but they have a great flavor similar to serrano peppers, but without as much heat.  I froze a big bag of those, and a bunch of jalapeno peppers I got from the market. 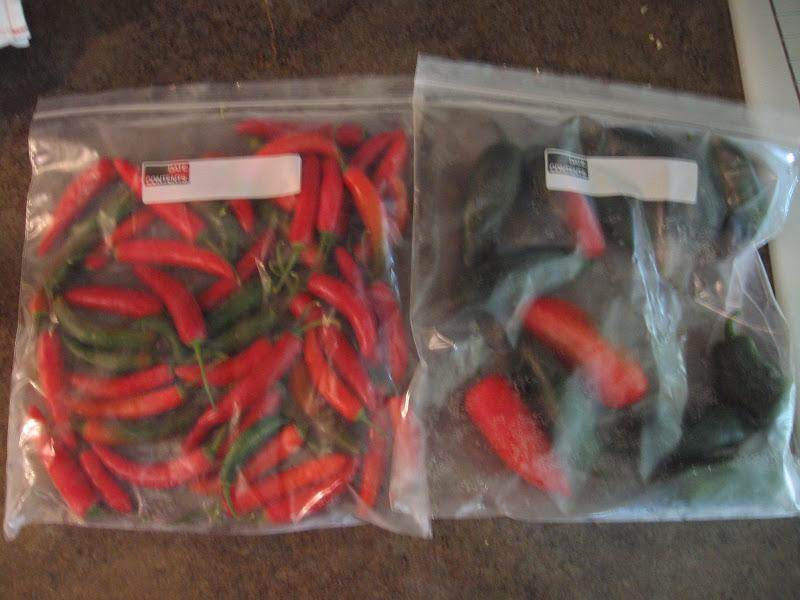 Leah Sattler
Posts: 2603
57
posted 14 years ago
the bells do seem to be  bit more finicky I'm guessing that I averaged 10-15 from each plant which is the best I ahve done yet. some of the hotter peppers or rather, the pointy ones, are just unstoppable, like the cayennes, jalepenos and even the banana. some pimentos I planted last year did really well, but I don't have any other years for reference and that might have been a fluke. My bells don't really get going till the weather starts to cool some, they seem to get nice and big and throw a few peppers in the summer but really start going to town later. I don't know if that is typical or not. i have read that they like cool  humid conditions contrary to the common idea that they like it real hot. several reccomendations I have seen advise people to plant them on the north side of vines and in between plants that will offer shade during the heat of the day.

I wonder about drying the peppers, do they need a dehydrator? enough of them so far just drying out on the counter, are getting weak and rotty in their corners.

Any stories about best methods for drying?

Posts: 40
posted 14 years ago
I am in no way an expert, but I've had the best luck by hanging peppers to dry them.  Somewhere they will get a good amount of air circulation.

I have one of those three tier hanging fruit baskets in my kitchen, and 5 feet away along the wall is a heat vent.  I take peppers and fresh herbs and hang them from the bottom basket until they are dry.  The heat doesn't really hit them, but it is close enough that air keeps moving.  I've got big bunches of sage, rosemary, thyme and parsley hanging out right now.

I haven't done this on a large scale with peppers, since I went with the freezing method this year, but it works really well with herbs.  If you have an out of the way heating vent in your house you could setup a little rack above it and hang the peppers from that maybe.  I wouldn't put it to close, I don't think you want them heating up much.
Leah Sattler
Posts: 2603
57
posted 14 years ago
mine just get rotten even in a well ventilated area but I haven't intentially tried to dry any peppers except pimentos. I split them in half and put them on a window screen outside and they dried just fine.

Susan Monroe
Posts: 1093
Location: Western WA
9
posted 14 years ago
I once rented a mobile home that had the usual floor heat vents.  The owner had build a long cabinet along that wall, covering the heat vent.  To let heat vent into the room, they had a sort of wooden grill covering that cabinet door.  What a GREAT place it was for drying!

Of course, that's if you use electric heat.  I heat with wood, and no matter how long I leave something over the floor heat vent, it doesn't dry.

Leah Sattler
Posts: 2603
57
posted 13 years ago
icecream??!! how very antithetical of him, I like you guys already

Brenda Groth
pollinator
Posts: 4437
Location: North Central Michigan
36
posted 13 years ago
thanks that was nice of you to say.

Peppers in Michigan are a Miracle anyway..we have such a cold growing season..we have friends that have a truck farm in Pinconning, on Lake Huron..and they generally supply our peppers, however..We have grown limited numbers in our tiny greenhouse.

Ron has a "secret formula" for making the hot peppers sweeter when he dries them..and it is the best pepper powder we have seen anywhere..

My husband Ron is disabled from a head injury, but he does come up with a few interersting things now and then.

I recently read ' head cases' stories of brain injury and its after math ' by michael paul mason who is a case worker of sorts for a saut after brain injury treatment facility in my home town of tulsa. head  injuries can be so devastating. wish you guys the best!

Brenda Groth
pollinator
Posts: 4437
Location: North Central Michigan
36
posted 13 years ago
thanks, his head injury was in 1985 so we are kinda used to it..

he has had several REinjuries since, some very severe as he is extremely accident prone..always seems to find some way to hit his head on something..

Posts: 66
posted 13 years ago
Maybe not hot enough where you are but I (after advice on freecycle when I asked for an old dehydrator) dry peppers in my car (or in my case my van). Still smells like hot peppers in the heat 2 years later.  Yum.  I put them on wire baking racks, basted cheese cloth around each rack to keep bugs out, and put them in the front dash under the sun for a few days.
Posts: 16
Location: MASSACHUSETTS 35 MI W OF BOSTON
posted 13 years ago

I wonder about drying the peppers, do they need a dehydrator? enough of them so far just drying out on the counter, are getting weak and rotty in their corners.

Any stories about best methods for drying?
HEY ALL I DONT EVEN KNOW IF THIS IS THE WAY TO RESPOND.....I HAVE 2 DEHYDRATORS, AN AMERICAN HARVEST, AND A RONCO, ONE WITH FAN AND ONE WITHOUT. DRYING PEPPERS, HOT ONES OR OTHERWISE IN THE DEHYDRATOR IS FABULOUS, IN FACT AFTER DRY, GRIND IN COFFEE MILL AND CREATE YOUR OWN SOUP STOCK ADDITIVES, DRY SOME LIME OR LEMON RIND  GRIND AND YOU ARE TALKING GOURMET SEASONINGS......  OVERNIGHT WITH CLEANED, EVENLY SLICED PIECES, IS USUALLY LONG ENOUGH THE ENDLESS VARIETY OF BLENDS YOU CAN MAKE AND SOUP POWDER IS AMAZING.

...and also one on making chili powder:

Steven's content is always a great fix for the information junkie, superbly filmed and precisely communicated. The SkillCult site is filled with obscure and valuable long-forgotten knowledge. Peruse and enjoy!

posted 4 years ago
Two of our favourite pepper treats are roasted red pepper spread and pickled roasted peppers.
Pickled Roasted Red Peppers
Makes about 4 pints
Roast 4 large garlic cloves and 20 med sweet red peppers on a grill or under broiler until charred,  turning to roast all sides. Once the skin of peppers wrinkles and chars, remove from Heat and place in a paper bag until cool enough to handle. Then lift off skin. Cool garlic squeeze cloves to remove from peel.
Combined roasted garlic with one and a half cups white vinegar, one and a half cups cider vinegar, one and a half cups dry white wine, 1/2 cup water, 1 cup coarsely chopped onion, a half a cup of sugar, 2 tablespoons dried oregano and 4 teaspoons of pickling salt. Bring to a boil over medium-high heat to dissolve sugar. Reduce heat and simmer for 5 mins.
Pack room temperature Peppers into hot jars leaving half inch headspace. Ladle hot liquid to cover. Process in boiling water canner for 15 minutes.

These are delicious on sandwiches and pizza!

Roast  6lb red bell peppers about 14 medium. 1 pound Italian plum tomatoes about five medium, 2 cloves unpeeled garlic, 1 small white onion under a broiler or on a grill turn to roast on all sides until tomatoes and peppers are blistered, blackened, and softened and garlic and onions are blackened in spots.

We use this spread in place of pizza sauce and as a dip.
Craig Dobbson
steward

posted 4 years ago
I love fermenting peppers.  Here's a funny one that I found in one of my jars this year:  https://permies.com/t/71578

The recipe is just peppers, water and salt. and a tiny bit of love, but not enough to make that pepper happy.