Yes, I think this is a reasonable place to find an experienced Permaculture designer!!! Do you have any photos or details about the project to share?

Scott
show more
6 years ago
permaculture
What group of Permie are you?
Interesting article, and I support the call for trials in Permaculture. But the tone of the article and his division into two camps is caustic and ham fisted.

It's telling that he has a problem with people who take Permaculture as a fuzzy synonym for 'sustainable living', as if this were really a problem. I think that humanity has been thrashing the environment for too many years and we need all of the tools, vocabularies, and even Nice Ideas to get people motivated and activated back towards an ecological way of living as possible. If Permaculture courses need to come with a warning label that says "conventional organic farming methods may produce greater horticultural yields", that's fine. Permaculturists may be falling short on some accounts, by not doing scientific tests in their own back yards, or by having a preference for "perennial and woody species" but they're not exactly the problem, are they? Right now there are uncontrolled nuclear leaks going directly into the ocean, rampant fascism and police states breaking out, sky-rocketing incidence of cancer, alzheimers, slavery and human trafficking, fracking, monsanto, etc... and his beef is with people who regard Masanobu Fukouka as a hero?

OK, let's bring on the trials:

Trial number one: is the author's existential manure well-fermented to the point of fine humus, capable of giving life and renewed abundance, or simply a load of shit?
show more
6 years ago
permaculture 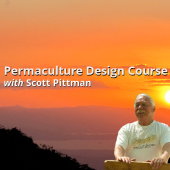 Thank you very much,

Here's a good interview I just come across about the idea of applying permacultural thinking to career development.

One of the best takeaways has to do with applying the concept of diversity to any design; i.e. David Holmgren's principle #10 "Use and Value Diversity". In agricultural design it's about using biological diversity and diversity of yields to gain overall resilience and stability in a design. In personal finance/career development, this means not relying on one main job, but having 2-3 main niches, as well as other secondary or seasonal niches. Or as Bill Mollison is quoted as saying "You should have a different job for every day of the week."

This same concept can also go a long way to unlocking the potential of people in your community, which is something you said you were interested in. Hope you enjoy the interview..

Scott
show more
6 years ago
permaculture
input on a goal/concept?
My advice, if you're interested in the concept of community-based agriculture/gardening is go out and find other people in your community who are interested in the same thing. Find places to start gardening, no matter how big or small and start doing it. No one will tell that you don't know enough, or that you don't have a permaculture design certificate. Just the fact that you want to do it and move in that direction is the thing that will put you in touch with like minded people. Every one has some experience, resources, gifts, knowledge to share and whatever you learn about permaculture in your studies will also get applied to whatever community project you're colaborating on...

As far as a career path, that will have to develop with time, and the more you start developing experience various kinds of capital (social, experiential, biological, etc..) you should see some career developments appearing organically in time.

Your community gardening group could also become a permaculture study/action group, or transition town movement, etc... Once you've got a few people you can setup a simple website or facebook group for people to stay in contact, plan garden activities, share info, etc...

Anyway, those are my two cents... I have a PDC and I'm doing all of the things that I suggested to you above.

Tires plus earthen fill and cob on the outside is one of the fundamental techniques associated with the Earthship concept, precisely for the reasons you're interested in.

http://www.youtube.com/watch?v=UNYFlcV9R1w <<< "Garbage Warrior" documentary about Michael Reynolds. One of the first shots of the film is him pounding earth into a tire. In the film he talks a lot about thermal mass, solar heating, the role of tires + cob in forming a micro climate for living (people + plants)

I think your proposal is fantastic. Regarding the previous comment, I also feel that having some career paths present in the program would help. Better yet, I think permacultural thinking always leads in some way to entrepreneurial projects, which in university-speak might be articulated as "self-guided career path development" or something like that. Another important piece of the puzzle would be having plenty of hands-on real permaculture projects as part of the course work.

I got a bachelor's degree in 2003 (Arts and Letters), and only then got interested in Permaculture around 2004. If I had had the option to do a degree path in Permaculture like the one you're proposing, I think I would have done it in a heartbeat. I now have my PDC, and am starting to work as a teacher, consultant and entrepreneur here in Argentina. As far as demand goes, I don't know how to gauge what that might be in the US, but in general I feel that Permaculture design needs to be in the mainstream of education, and that it will be a fundamental part of "solutions thinking" in all of our foreseeable futures. Here in Argentina (Córdoba) almost everyone that has participated in my Urban Permaculture workshops has said "this needs to be in the curriculum of all schools, starting with elementary schools." So from my perspective, there will be not just a demand on the part of individuals, but a societal demand as well.

Looking forward to seeing how this develops. Cheers!!!

Biodynamic vs permaculture?
Hi all -

Here in Argentina, I've met many more gardeners that know and/or practice Biodynamic gardening compared to those familiar with Permaculture. Which I've find a bit odd since I would consider Biodynamics to be a "grandfathered-in" subset of possible contents of the permacultural toolkit. For one thing, lots of the Steiner / anthroposophy literature is in-print here, whereas Holmgren and Mollison, et all are not. (Which is a whole 'nother story. ANyone want to start a Latin-American permaculture publishing/translation house?)

Biodyamics also gets frequent lip service in THC magazine, a hugely popular monthly magazine published in Buenos Aires and dedicated to organic cultivation of cannabis. Many of the growers interviewed for the magazine say they use biodynamic methods with considerable results, which more than anything boils down to use of the Biodynamic yearly calendar. The calendar shows that for each day/month there are days when to plant, days when to harvest, days when to apply fertilizer, and days when NOT to do so etc... I assume that the publishers of the calendar use astral and or lunar cycles to update the recommendations for any given day, but I'm unaware about how this is done.

As far as I've been able to observe, that is the most widely practiced facet of biodyamics that I've observed here in Argentina: doing certain things on certain days, and avoiding doing those things on other days. Whether or not one perceives, believes, or has access to the kind of intuition that Steiner had which led to the elaboration of this calendar, I think that on a very basic level it encourages the gardener not to be intervening all the time and to let the garden benefit from periods of inactivity (aka constant human meddling). This is exactly the kind maintenance protocol that we would find in a successful permacultural food forest, for example.

Scott
show more
8 years ago
biodynamic
Organic food 'not any healthier'
Sounds like the typical brainwashing routine via "science" as badge of truth. I've always purchased locally grown organic food to promote a healthier eco-system and to support people who give a damn. Any experiment can be made to mean anything if you delete enough variables from the data set (i.e. health of the planet, health of the local economy, health of flora and fauna, etc...). Sounds like a complete load of bollocks, just in time for the GMO labelling bill on the California ballot this fall.

If this law passes in California, which would require labelling of all food and drinks containing GMOS, it will mean a total shakeup for the vast majority of agro-food corporations in the US. And a major victory for us humans at that.
show more
8 years ago
food as medicine


I have to say it may not be pretty but It saves so much work and the barrels are free for us.

It sounds pretty to me.