Natural remedies for plantar fasciitis?
Standing on a rolling pin/piece of pipe/dowel/tree branch and rolling back and forth on the arch (making sure to go up the heel). Hurts like hell, instantly reduces symptoms by a good 80% for me...
show more
2 weeks ago
food as medicine
Dishwasher but no septic
Don't have any experience with them, but have run across dishwasher soaps claiming to be greywater safe. Big problem with most of them are high levels of sodium or boron, which will absolutely nuke the soil. You won't be able to filter them out, and honestly, even just trying to inflitrate them probably won't work well since there won't be the life in the soil to break down the fats from the dishwasher, so you'll stop infiltrating into the soil. Wish I had a good suggestion for you...


As for capturing heat, easiest way to capture heat from a bathtub is to not drain it until the water is cold. Heat (and a bit of humidity) ends up going into the house 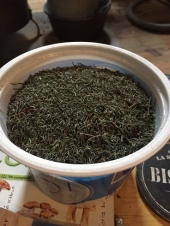 Is there any compelling reason to deal with tiny thyme leaves instead of oregano's manageable ones?
I've always found the flavors to be wildly different.

90% of the time, I don't even bother with pulling the leaves off the stems though. Just toss a couple stems into whatever you're cooking (obviously doesn't work with every dish), let the flavor infuse, and pull the stem out before service, like a bay leaf.
show more
1 month ago
gardening for beginners 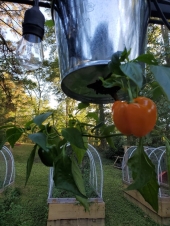 What foods shouldn't I grow?
Really going to depend on what's important to you. I love growing sweet corn, but yeah, probably not worth it for flour corn (50 pounds is a few bucks).

Probably not worth growing your standard russet potato, but there are some cool potatoes out there that are either unavailable, or much more expensive from the store. Grew "Huckleberry Gold" potatoes this year and really enjoyed them.

Like Rob, I've had abysmal luck with bell peppers (not great luck with any pepper in general really, other than one MASSIVE Hungarian Wax pepper), and I straight up don't even try growing cucumbers anymore. Swear, I always get like a half dozen decent cucumbers, and then ten thousand miserably bitter cucumbers. I just buy them instead. Can get big sacks of pickling cucumbers for like 10 bucks at the farmers market here when I'm putting up pickles, and just buy the odd slicer at the grocery store...


show more
1 month ago
gardening for beginners
Is it safe to use an Oil Drum as a planter?
Used motor oil or fresh? Fresh, I wouldn't be concerned if you cleaned them out well first (just hot soapy water should suffice). Used motor oil can have some metals (hexavalent chromium, aluminum, etc. from wear in the engine) that you wouldn't want in soil for fruiting plants.


Not really sure it's an ideal planter in the first place though. Pretty small for trees, and unless you use a real high quality coating (i.e. a novalac epoxy, not paint) they'll rust pretty rapidly in contact with soil.
show more
1 month ago
gardening for beginners

Are we improving soil conditions
YES! And in a lot more ways than you might appreciate.

First and foremost, I wouldn't discount the "occasional dead leaves or branches". Those leaves and branches break down, feeding bacteria and fungus in the soil, as well as leaving organic matter that helps hold moisture and improve nutrient availability. The roots go deep, and will bring up minerals that aren't necessarily available in the upper levels of soil. When leaves and branches are left in place, the minerals accumulated in them will then be present in the higher levels of the soil.

Second, roots actually exude organic compounds. These exudates feed bacteria in the soil, suppress harmful pathogens, and do a lot of other cool stuff.

Third, plants prevent erosion from wind and rain. This doesn't necessarily directly improve soil, but it does definitely slow down how fast organic material and other good stuff is removed from the soil in the area.

Finally, some plants (legumes being the classic example) are capable of forming a symbiotic relationship with bacteria in the soil, and actually pull nitrogen out of the atmosphere fixing it in the soil (sort of, it ends up in nodules on the roots usually. When the plant dies, the nodules break down releasing nitrogen)
show more
1 month ago
gardening for beginners
North American Permies: Your 2020 potato crop observations.....
Grew "Huckleberry Gold" this year. Got 35 lbs out of 5 lbs of seed potato in a 20 foot row. I was pretty satisfied given the terrible plague of grasshoppers we had. Pretty well defoliated by end of the season.
show more
1 month ago
soil

Tomatoes - help me find a taste explosion
What are you looking for? Cherry tomatoes? Slicing? Paste tomatoes? Just a good all around tomato?


Still on the lookout for the best paste tomato myself...
show more
1 month ago
gardening for beginners 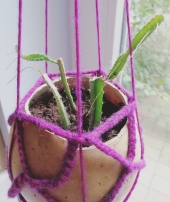 Indoor plants for apartment with no direct sunlight?
Mother in law's tongue is well known for being able to handle very low levels of light (like, incidental light from fluorescents in an office building low levels), and is supposed to be one of the best plants for removing indoor air contaminants. Stupid easy to grow indoors
show more
1 month ago
plants
sterilizing row covers to prevent pathogen carry-over?
Sun might work, but if there's any sporulated bacteria or fungal spores, they'll be pretty well bulletproof.

I'd say sun it for a few days and then use it on something other than brassicas.
show more
1 month ago
small farm