any pics of your oil lamps?

Abraham Palma wrote:I'm interested in reusing waste cook oil too, since I got more soap than I ever need. Oil lamps sounds nice, but so far what I've managed are more like oil candles, not a very bright light. It's a cork with a cotton wick floating in a vase with oil. Very dim light.


Hi Abraham
I haven't been here for a while, but just checked in bc. I am making soap from used olive oil and wanted to see if there was anything on it here. I'm done now and have made 4L of liquid olive soap. I can see that you are in Malaga, I live in Cartama - if you are interested maybe we could do it together one day? 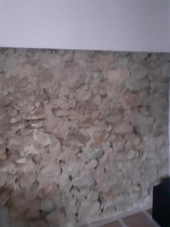 Repair and maintenance of Cobb wall
Thank you! Do you know approximately the quantities needed for this sandy cob?
show more
8 months ago
cob

Repair and maintenance of Cobb wall
Our house (in Spain) is 200 years old, and built w. Cobb and rocks, traditional Spanish style. Most of the walls are plastered, but in the living room we have opened up some of the wall bc we think it is so beautiful. However it needs care... the cob is crumbling and falls of bit by bit. So how do I care for it? And how do I seal it, without covering the beautiful stone work, so that it doesn't continue to crumble?
show more
8 months ago
cob 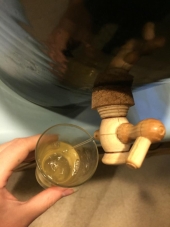 Casie Becker wrote:Okay, poking around makes it look like there are two different camps of kombucha brewers. Does anyone here have strong feelings or particular experience of the differences between batch brewing and continuous brewing?  If this turns out well I will probably want to spend some money to get some large volume fermenting equipment so I'd like to start early determining if I am looking at dedicated brewing crocks or just large traditional fermenting crocks. I know I don't have enough experience with fermenting to form a complete picture of the pros and cons0 of each.


I have two co tinous brews set up these days - bc. we found that the sugar content would often be too high.if we had one... (I would get blood sugar crashes and my husband's eczema would flare). So what I am doing is almost batch except I have jars w. spouts, bc. It is so much easier. I've bought mine in IKEA, very cheaply - they are made of glass.
show more
2 years ago
paleo
How can you calculate solar savings?
To us it was pretty simple...

We were using something like €750/month running a generator (living off grid w. husband who works full time online... from home). Our closest neighbour went on grid and payed €12.000 for the line into their house - and they were only 50m from the closest line, we are more like 200-300m from there... and we would have to get the line across someone else's land, which means a building permit would be necessary... so it was solar or running the genny.

6 kWh solar + batteries = €18.000 (plus a shed to put the batteries in and renting an excavator for a day to have terraces dug for the panels to sit on). If the batteries only last 10 years that is 1800 pr. year (plus maybe running the genny 3x pr. year)

And we have much more freedom to do what we want with this system (much more power), than we did with the generator. And that is not included if the energy prices rise (which they will), and not included numerous repairs on the genny and the times the mechanic gave up on it and we had to buy a new one... (more than once in 4 years) = €500 every.single.time. Edit: I love using the wood burning oven so much - but I dare not use it in the summer, so I aprechiate having a regular oven for those times

We don't use the oven on a rainy day, we don't do laundry on a rainy day. We have 2 propane burners for a rainy day (and 2 induction for the rest of the year). We have a wood-fired oven for a rainy day - plus a propane barbecue which can also be used as an oven, plus a haybox for slow cooking. We live in the south of Spain and have 300 days of sun/year.

Hopefully in 10 years there will be better and cheaper batteries on the market.
show more
3 years ago
solar

Ferrocement drip irrigation
I think you could do it with terracotta pipes? Like ollas, just pipes instead...
show more
3 years ago
plumbing 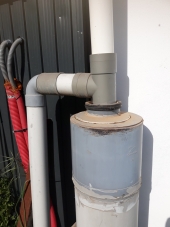 First flush system for European drains
Hi y'all
We are looking for a first flush diverter for our rainwater harvesting system.

When we first moved up here to our homestead we were both very eager to make everything ourselves, and also the - mainly Australian - systems that we found online cost an arm and a leg and didn't fit our European drains... Now I can find a lot of systems that fit the European drains, but they are all in the US and I would prefer if  I didn't have to pay toll on top of the price (also because paying toll when importing as a private person is a hassle...). So 5 years ago we built our own - see attached image. It kind of worked, for one winter - then the brutal sun in Southern Spain destroyed the black rubber at the top.

Can anyone help us?

Diet and Other Factors that Influence Intelligence

Kathleen Sanderson wrote:
I know some people consider this to be 'racist' but studies of intelligence have shown some pretty low average IQ scores from the African nations.  I don't know what all factors into that (IQ scores of American Blacks are also lower than average, on a modern American diet), but I do wonder if we might want to do more research before adopting their diet wholesale.  (We have contacts in Kenya, and there -- and probably in other African nations -- the diet for poor people seems to be mostly starches, corn, cassava, yams, rice, etc.  So that undoubtedly has some effect on the overall scores.)
Kathleen

I find it interesting that diet is used as a possible intelligence indicator.   In the 19th century, they measured the sizes of skulls.

In the 19th century, the British used craniometry to justify policies toward the Irish and black Africans,
whom the British considered to be inferior races.

Also,in France, Paul Broca demonstrated that women are  inferior to men because of their smaller crania.
He argued against higher education for women because their puny brains couldn't handle the demands.

In the 20th century, the Nazis used craniometry to distinguish Aryans from non-Aryans.


The IQ is very much a cultural measurement which measures some qualities that are appreciated and encouraged in our westerm culture. But even saying that - most of the "science" into IQ and "race" have only measured African Americans and extrapolated that "evidence" to applied to Africans, since they are supposedly that same "race" (yes "race" bc. there aren't any, we belong to the human race). Problem is that there is a strong case for claiming that African Americans are mixed "race - the racist laws under Jim Crow would make anyone black if they had just 1/8 or less "negro blood" in their veins (e.g.. Obama is considered black even though he is just as much white as he is black and grew up in a white culture), and the culture and abuse that African Americans have suffered in the US have generated a collective trauma that still plays out in families - and then the fact that more African Americans eat a poorer diet and go to inner city schools skews the picture entirely.

In Europe you can meet many many Nigerians at Technical Universities - and they are super smart, and do very well at these schools. In fact the only place I see this racial bias playing out in Europe is in the UK, and even there is it not even close to how it looks in the US (but all over Europe you can see the same picture play out in Arabian families for many of the same reasons - and it was the Arabians who invented math and brought it to Europe). So no - there is no scientific proof that Africans have a lower IQ than other "races.

Saying that I do believe that the nutrition a child receives in infancy very much does affect the development of the brain - including IQ and motor skills, and breast milk is very high in cholesterol. But it also has the highest content of lactose of any mamal, so it would seem that nature believes that sugar is in some way necessary for the developing brain.
show more
3 years ago
ulcer factory