Removing yellow jacket nest from chicken coop
Find your propane torch. Wait until dark when the insects are asleep. Burn the nest.

If one of them comes toward you, aim the flame toward it. I have done this with heart pounding, but I didn't get stung.
show more
1 year ago
chickens 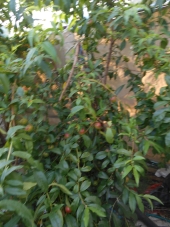 Prunus hybrids in TX (Pluot, Plumcot, Aprium, etc.)
We live in the gulf coast area (just North of Houston). We have not tried Prunus hybrids. However, we have tried a Plum tree. When it has a few fruits on it, they are delicious. But, it gets confused because the tree requires a low number of chill hours. Even the peaches will bud and blossom too early.

We also have a nice apricot tree, some blossoms, but NO fruit.

The chill hours are the problem. You have to have low chill hour trees for a warm winter, but if the winter is cold, you get nada.

We have had great success with citrus, peaches, and pears. If you live near the gulf coast, you should have Bob Randall's book.
show more
4 years ago
fruit trees 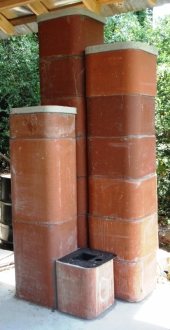 Rocket Heater Masonry Stove Built using Flue pipes and a Dragon Burner
A main advantage of the terracotta chimney flue liners is their structure. They are self-supporting.

We have a chart on our Dragon Heaters blog which addresses the thermal mass issue. Cob vs. terracotta not much difference from a conductivity and heat storage point of view. Terracotta flue liners have to be insulated from temperature changes greater than 50°F per hour. So, we recommend lining the first bell with standard fireclay brick splits (1.5" thick). The fireclay bricks do store heat better than cob or terracotta, so that makes the castle build more like a masonry heater. Fireclay brick material has the best price/performance for conductivity and heat storage.

Cob makes the working environment slick which can result in injuries or falls when walking around. We are not fans of cob.

We are using Peter van den Berg's design for the J-tube rocket heater; we have tested its efficiency and published the results. (You may be able to find the sketchup drawings of his J-tubes on line.) His design burns so efficiently there is no build-up of creosote or soot. Our designs recommend installation of a cleanout door for use once a year to get rid of ash at the bottom of the bells.

We have a chart with the relative BTU's per hour of the 3 sizes of burn tunnel which we sell. You need to know how many BTU's are needed for your house.

IMHO, the 4" needs to be tended way too often in order to keep the burn going. I would recommend a 6" because of this issue.
show more
5 years ago
rocket mass heaters 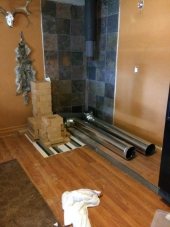 have seen some posts suggesting that you could adapt a larger system to a smaller flue, but couldn't find anything definitive.

Here is a definitive answer backed up by experimentation. If you have an 8" system, you can't use a 6" stove/chimney pipe. It won't burn properly; you will get smoke back and end up covering part of the feed tube to make it work.

The exhaust system must match the size of the combustion system or be larger...not smaller.

Technically, the steel drum is not tall enough relative to the heat riser to be an effective bell. If you want to read more about bells, there is a document on the blog in my signature which compares and contrasts bells vs. flues. A traditional rocket mass heater as described in the book is a flue system; the exhaust is routed through a constricted space and stratification by temperature does not take place to any significant extent. In a bell system, plenty of space is provided for the exhaust to stratify by temperature. The warmer gasses which were involved in the combustion stay in the bell until they have given up their heat to the surface of the bell. The cooler gases, such as Nitrogen (which is 79% of the air), fall out quicker and are swept out of the chimney.
show more
7 years ago
rocket stoves
hottest burn area and temps in RMH
My understanding of your question is: at what point in the combustion system is the temperature the hottest? Is it at the top of the heat riser? The bottom of the heat riser? The end of the burn tunnel?

Would you like to share with us why you are asking this question? Perhaps someone can help you with the issue without having these particular facts.
show more
7 years ago
rocket mass heaters

The blog in my signature has an article discussing the contrast between the way the exhaust is stratified in a bell and flows all together in a flue, bells vs. flues. Bells have some advantages, although they are not part of a traditional rocket mass heater as described in Ianto Evans and Leslie Jackson's book.
show more
7 years ago
rocket mass heaters
Cedar Heights Fireclay
If this is premixed fireclay in a pail and it runs about $1/pound, here is what I know. We recommend it as a mortar for the joints between chimney flue liners and as a way to attach fireclay bricks to the sides of chimney flue liners. We tell our customers that the joints should be no thicker than 1/8"; any thicker and they will show cracks and leak air when they dry. It dries very hard and brittle. 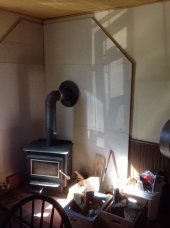 Cindie, you often speak out loud, but you still haven't tried rockwool?

I said that it may or may not handle the heat because WEB4DEB has a pellet rocket heater in which he wrapped his metal heat riser with rock wool. In his autopsy published on 2/22/2013 at minute 1:36 he shows how the metal is long gone and the rock wool has deteriorated significantly.

We used rockwool on the outside of the firebrick in our kiln, so it is a material which is known to us.

You might also notice that in the rocket they built at the workshop in MT recently, they used ceramic fiber blanket around the feed tube and heat riser areas of the combustion system.
show more
7 years ago
rocket mass heaters

1st RMH BUILD -- old house in detroit, scrappy approach, winter is coming
Exhaust from a fire does not want to go down. It wants to go above the height of the fire. If you try to force it down, your fire will be smoky and not burn fast and hot.
show more
7 years ago
rocket mass heaters