Cured Duck/Duck Prosciutto Without Nitrates
I suspect most of the books include the use of curing salts (pink salts, nitrate/nitrite) and/or their "natural" alternatives purely for cover-your-ass purposes.  It's not at all necessary for whole-muscle cures.

I cure duck breasts by rubbing them generously with salt and... that's it.  Leave in the fridge for a few days, then hang up in a coolish place to air dry for a week or so.  Slice thin.  Usually I end up leaving it too long on the salt, and hang it for too long, so it gets quite hard/firm and difficult to cut (though a sharp knife makes a big difference), but it's tasty all the same.
show more
2 months ago
ducks and geese

Advice and tips for new cow owners
We brought four bred Jersey heifers onto the farm a few years ago that were quite skittish.  We eventually got them into the corral, then into the barn, then finally, with the use of ropes, into the stanchions.  Then we left them locked in for two or three days, feeding and watering them there and making a point to walk both in front and behind them multiple times per day, talking to them and touching them the while.  By the time we let them out they were completely calm and approachable, as though a switch had been flipped.

Even if you won't be milking, such a stanchion setup is invaluable when you need veterinary work done, or if you intend to AI your girls.
show more
11 months ago
cattle

preserving your ethically raised meat
Salt curing and air drying is my preservation method of choice because it's easy to do and it lasts nearly forever.  I've got a handful of duck legs and breasts plus some venison hanging up in the kitchen that were preserved back in December and January.  Take down one or two, throw it in a pot of beans, and you're set.

Preserving meat this way requires only two things: salt and twine (and you could probably get by without the twine).  No special equipment, no special skills, just a bunch of salt and time.
show more
1 year ago
food choices

Amusing things kids say:
When my oldest son was 6 or so, I went into the bathroom immediately after him and found pee all over the seat.

"Son, how in the world did you manage to pee ALL OVER THE SEAT?"
"I was scratching my ear."
"Well, then, you scratch with one hand and hold on with the other."
"But both ears were itchy."
show more
1 year ago
parenting
That Just Does Not Make Sense

Travis Johnson wrote:My question is, am I the only one that sees this kind of nonsense and spends wayyyyyyyyyy too much time thinking about it?

I spend a lot of time thinking about these sorts of things, but mostly just as a reliable source of self-amusement.  I do get moderately incensed about certain things of this ilk, but that too serves as a sort of self-amusement.

One example: walking by a freezer case at Wal-Mart (I'm sorry) a while back, I noticed bags of chicken wings that said in big, bold letters "Smoked* Chicken Wings," written in a quaint hand-lettered farmers-market-esque chalkboard style.  Following that asterisk, I learned that these were chicken wings to which "smoke flavor" had been added.  I was at first quite angry, because there is, to my mind, a clear linguistic and qualitative difference between something that has been smoked and something to which smoke flavor has been added, and because our corporate-bedfellow government is too lily-livered to stand up and disallow such blatant lies.  Then I despaired a bit, wondering how on earth as small-scale, conscientious food producers we can compete against such a stacked deck.  But then I turned that into motivation to better connect with my existing customers and develop relationships that subvert such tactics.  And finally I found myself amused at the obviously desperate attempts of corporate America (or wherever) to capitalize on something that it cannot understand and with which it cannot truly compete.

So, yeah, I think about such things a bit, too.
show more
1 year ago
meaningless drivel
Adding protein to feed
Look up the Pearson's Square method of calculating for feed, then just add in enough high-protein feed (e.g. soybean meal or fish meal) to get whatever total protein content you want.
show more
1 year ago
chickens
Starting asparagus from seed -- now?
I am an optimistic seed buyer.  What seems entirely easy and reasonable in December and January often turns onerous come planting time.  (My saving grace is often the fact that seeds keep--there's always next year.)

So one of this year's optimistic purchases was asparagus seed.  Now that I've remembered that I bought it and ought to do something with it, I've found that the recommendation is to start the seeds 10-12 weeks before the last frost, which as it happens would have been 10-12 weeks ago.

My question, therefore, is what to do from here.  Do I go ahead and start the seeds, knowing they will be 'delayed, by 10-12 weeks going into the fall/winter, or just wait until next year and get on it earlier?  (I can, of course, do both: start some seeds now and see what happens, and save some to start next year, but I'd prefer to learn from someone else's similar mistake if that's an option.)
show more
1 year ago
plants 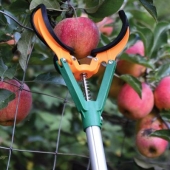 How do you harvest your tall fruit trees?
I dislike the fruit pickers, having found them to cause more trouble than they solve.  I've got a couple tall pear trees that I pick by climbing and picking.  But there are some fruits that are too high up to reach by climbing, and my method there is to get as high up as I can and shake the tree, causing the ripe fruits to fall.  There's usually a little damage to the fruits, but they're still perfectly usable.
show more
1 year ago
permaculture

In defense of a Rooster

Cécile Stelzer Johnson wrote:Do you have any solutions?

The long and short of it is he needs to be put in his place.  You need to establish that you're at the top of the pecking order.  If he attacks, you ought to be able to get in a good kick and send him on his way.  You need to do it hard enough to send a message, but gentle enough not to hurt him, which is really quite easy in practice.  You might also carry a long-ish stick, say four to six feet, and give him a healthy whack each and every time you're close enough to do so.  He'll learn soon enough to keep his distance, though you should be prepared for his periodic retesting of the pecking order.
show more
2 years ago
chickens
Tough old bird
For a different take on an old bird, skip wet-cooking altogether.  I've found that a dry-roasted spent hen can be plenty tasty and still chewable when put in the oven at about 325F for two hours or so.  You're definitely cooking it to well-done and then some, but the extra time seems to break down the muscle fibers to make them chewable, more or less like braising does.  The meat will be firm, certainly, but it ought not be tough.

Coq au vin is a classic, but for a rather different dish that utilizes the same basic technique you could make cock-a-leekie soup.

I've never tried it, but I had a customer tell me that using alcohol is another method of rendering an old bird palatable.  I don't recall the specifics, but I think he was brining the birds in whiskey.  I imagine an herb-flavored vodka might be interesting too.  He may have even used the alcohol as his cooking liquid, or part of it, but again I don't recall.
show more
2 years ago
cooking