I had to click on "Load More" until I got near the end to see most of the videos you mentioned. It seems that at least most of them are there.
show more
4 years ago
geoff lawton

Soil problem
This one shows the improvement in the food forest area with continued chop and drop over time and includes a look at the soil:

Soil problem
I was happy to see updates on this project with apparent improvements in the soil in both annual production and food forest areas. This update shows the approach in the annual production area:
show more
6 years ago
permaculture

Broadforks
I use my Meadow Creature 14" broadfork for digging as well as for loosening the soil. Last summer I was digging mini-swales in the middle of our dry Mediterranean summer, and while I did have to wet the surface of the soil to break through the crust, the leverage of the broadfork broke loose large pieces of soil at a time. For digging, I loosen the soil with a single pass of the broadfork, working my way backwards, then come back through and take out the loose dirt with a shovel. The big advantage of a broadfork over a digging fork is its size and leverage. I echo what was said above about the Meadow Creature broadfork--I have found it to be well worth the investment. 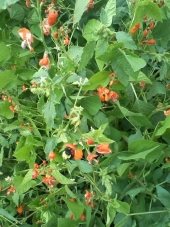 
I've been discussing recently the prospects for growing runner beans (one of my favourite vegetables) in Portugal. Most people think this is hopeless, because high temperatures mean runner bean pods won't set. I wonder whether, with stronger sunlight, runner beans might grow well in annual beds in the dappled shade and lower temperatures of a forest garden, thus also providing another nitrogen fixer. Maybe we could breed a variety that might work.

Well that was like a red rag to a bull, so I consulted my other half and we started to pull a few ideas together. He is the one who loves 'green beans', and this is his green bean seed collection ready for planting this year.


My other half suspects that the problem is that the taller stems are more susceptible to catching the sun. A bush plant is, literally, bushier, and shades the stem better. With longer stems they just don't seem to be able to get any growth. With the few stems that did survive, the bean set wasn't bad, it seems that the problem might be with the stems, not the set. But of course, that's just how he remembers it, and he's not sure which of the two possible species it was, and it obviously needs more experimentation.

Shade is a valuable and scarce commodity here in Portugal, and a forest garden might indeed be the way to go for growing runner beans. Or maybe it will turn out that only Phaseolus vulgaris is suitable and more breeding work will be needed for the coccineus species. I smell a project coming on...


The problem with runner beans (Phaseolus coccineus) for those of us in Medditeranean climate is that they won't set pods when temperatures are above 90°F since they are native to the mountains of Central America. Two years ago I tried to different varieties of Phaseolus coccineus with limited success. (I am in USDA Zone 9b in the Sacramento Valley of California.) I planted Scarlet runner and Sunset Runner, which is peach colored. The Sunset Runners did the best and set beans at temperatures a degree or two warmer than the Scarlet runners. The vines and foliage thrived all summer and they produced plenty of blooms. Bumblebees loved them, but they only set pods at the very beginning of summer before temperatures reached the 90's and then again when temperatures dropped in the fall. Phaseolus coccineus is a perennial with tubers that can overwinter in mild climates even after the tops have been destroyed by frost. Unfortunately, not one of mine grew back the next spring, even though the tubers were still in the ground and looked quite healthy. Runner beans can be used as cooked green beans or as dried beans when mature.

Last year, I found an excellent green bean that worked much better in the heat: yardlong bean (Vigna unguiculata subsp. sesquipedalis) This is a pole bean like the runner bean, but didn't produce much foliage and it is an annual. Instead, it puts its energy into producing beans and doesn't seem to care how hot the temperatures are. The green beans should be picked when they are about the thickness of a pencil and can be eaten fresh or cooked.
show more
6 years ago
plants
Source for arracacha, peruvian parsnip
Sacred Succulents has them for sale: http://sacredsucculents.com/andean-tuber-crops/
show more
6 years ago
plants

Podcast 284 - Reverence for Bees Part 1
Sounds like there are too many people calling themselves "The Bee Whisperer" to know who is who, but to be fair to Jack Spirko's friend, his name is Michael Jordan, so he needs some description to identify him as the bee keeper. Looks like he has taken Jack's PDC as well: http://permacultureglobal.org/users/10463-michael-jordan
show more
6 years ago
paul wheaton's permaculture podcasts
support thread for people trying to download freebies from dailyish email
Worked fine for me both last week and just now.
show more
7 years ago
tinkering with this site
Best Online Permaculture Design Course?


That site has changed its name several times and the program is not run by Larry Korn though it uses videos of him teaching. Michael Pilarski reviews this online course and others at the following link I found very helpful: On-line Permaculture Design Courses - A list compiled by Michael Pilarski
show more
7 years ago
permaculture design course listings

ways to use Christmas trees after Christmas 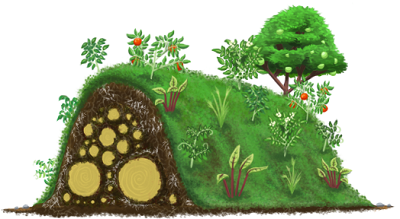 I thought that pine was a bad thing in Hügelkultur. No? Should you use just one tree per mound or can you load it up?

I did small hugel beds using about a dozen Christmas trees of various varieties. I dug down 6 or 8 inches, cut the branches off the trunks and put the trunks down first and the branches on top along with leaves and other yard waste and chicken manure, and put the soil back on top for a total height of about 18 inches to 2 feet. I haven't eliminated irrigation, but the picture below was the result this year.

Alex, I saw in your YouTube video that you that you bury yours about 18 inches deep now and keep the wood below ground level. I live in a Mediterranean climate, so I don't have the sand to contend with that you do, but we get less rain, so I'd like to try that. One modification I have made since this picture is to turn the pathways into on-contour swales, and that seems to working well in our winter rains.