Food Forest, what I see in my mind.
In my mind I see me transforming my forest into a wild food forest, but of "normal" veggies.

Imagine Squash plants growing up trees, (I tried this, but did not have enough good soil for them to grow in. Next year I will plan better.), carrot, potatoes, cabbages, berries, tomatoes...  Can you see it ??

Just a wild abundance of veggies doing their own thing.

This next spring will see a few different plants in the forest by me.  Worse case is a lot of happy deer.
show more
1 day ago
perennial vegetables 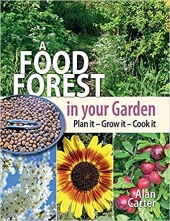 When I think of food forest I see vines growing up trees laden with veggies, raspberries, blackberries and strawberries, patches of carrots, tomatoes growing wild.

In my mind I walk about the forest with a basket collecting "normal" garden veggies.

I was raised in the forests and know a lot of natural edible plants, but one can dream.

jokes
I've started telling everyone about the benefits of eating dried grapes.

It's all about raisin awareness.
show more
1 day ago
meaningless drivel

They ended up in a tie.
show more
4 days ago
meaningless drivel

jokes
The butcher backed into his meat grinder and got a little behind in his work.
show more
4 days ago
meaningless drivel

jokes
A rubber band gun was confiscated from algebra class because it was a weapon of math disruption.
show more
4 days ago
meaningless drivel 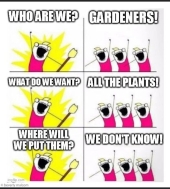 Seeds Have Gone Places!!
Well, my seeds that I planted by trees did not fair well.  They grew to about 1 foot and that was it.
I think that there was not enough good soil.
Next year I will try again and dig out a large space and put in a LOT of good soil and see how they do.

Thanks Pearl for the seeds, I still have a half dozen of them left and will try to grow them next season.
show more
5 days ago
gardening for beginners

It's just a whisper in my pants.

Well, sometimes it is a scream.
show more
5 days ago
meaningless drivel

jokes
An older woman, well past child-bearing years went to a walk-in clinic where she was seen by a young, new doctor. After about 3 minutes in the exam room, the doctor told her she was pregnant. She burst out the door, screaming as she ran down the hall.

An older doctor stopped her and asked her what the problem was, and she told him what had happened.

After hearing her out, he sat her down in another exam room and marched back to where the first doctor was and demanded, “what is the matter with you? That lady is over 60 years old, has four grown children and several grand children! And you told her she was pregnant?”

The young doctor continued to write on his clipboard, and without looking up, he asked, “Does she still have the hiccups?”
show more
1 week ago
meaningless drivel