Hugelkultur Organic Community Garden Sprayed
Thanks for the responses and input.  We have no legal recourse as the property is privately owned by a benefactor that has actually been against my hugel mounds, trees, etc, from the start.  The city provides liability insurance for the property and assistsee in the water bill.  I believe I will focus efforts at the homestead, look for some country property and just pull out of the community effort.  I have tried too many years in this city and it is definitely a losing battle.  Another town, different open minded permits folks, the story would be one of success not death to our efforts.

The city or whoever will definitely have a task in tearing down the huge hugelkultur mounds.   This garden was named the tetrad... one massive 20' circular mound in the center and four flanking mounds at the corners, arched mounds in between. .. to commemorate the four blood moons and solar eclipse. It was an awesome, extremely productive site.

Thanks guys, gals,  just knocked down, reinvigorated to the next focus.
show more
3 years ago
hugelkultur
Hugelkultur Organic Community Garden Sprayed
Sad really,  to see the potential and so many hours in building a great hugelkultur example only to see it killed.  I'm am partly responsible for my inactivity over the last year, though I continued to haul mulch to the site and layout walking paths with cardboard and covering. I'm resigned to just work on my homestead at this point, shotgun in hand for any sprayers or city officials.
show more
3 years ago
hugelkultur
Hugelkultur Organic Community Garden Sprayed
Thanks for the response Bill, exactly what I thought.  I've been in this city 12 years and all ventures but two have been torn down or poisoned.
show more
3 years ago
hugelkultur
Hugelkultur Organic Community Garden Sprayed
I have been the organic garden coordinator for our local community garden for 3 years.  Recently,  the traditional, "chemical", garden coordinator received complaints from the city and neighbors because the grass was too high in our area.  This coordinator got with the city and they sprayed roundup or some other weed killer on the organic section a couple weeks ago.

We have been working on this organic section for 3 years and granted, most people fall out in the heat of Mississippi summers, but we had built an impressive Hugelkultur mound system in a 40'×60' area.  The entire organic section is about 200'×200'.

Question, Can we remediate the area or should we just abandon it?  I have a fig tree, apple tree, herbs, comfrey, all are showing signs of being poisoned.  Any help is appreciated.
show more
3 years ago
hugelkultur

Better Wood Heat: DIY Rocket Mass Heater Videos kickstarter
Is there any information on the innovators DVD from Konstantine? He built an amazing heater with a converted pressure vessel for hot water, pizza stone on top of the burn barrel, and modified steel plate insert at the feed tube. Just asking...
show more
5 years ago
crowdfunding 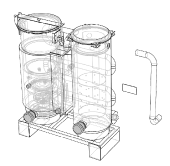 Rocket Mass Heater Builder's Guide - Kickstarter Straw Poll
I would definitely be interested in the hardcopy. Thanks so much for all your hard work.
show more
5 years ago
rocket stoves 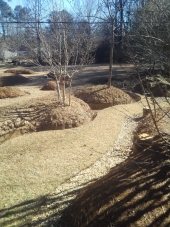 Above ground vs below ground huglekulturs...
I looked up many water loving trees and perennials and passed that on to the client. Here's an updated photo on how the water is charging back from the ditch as I build deeper buried hugel beds. Now I just need to let it dry out a bit and dig the big swirly ditch. Secret to success, hd shovel head welded to 1-1/4" thick walled galvanized pipe. Cuts, shaves, and digs deep if you can take the weight.

Thanks for this Site. I continually find myself enthralled and learning so much from your experience and knowledge. One shovel at a time...
show more
6 years ago
hugelkultur