Pastured Rabbits: experiences, ideas?
How are you keeping rabbits from burrowing out of their paddock?
BTW  domestic rabbits CANNOT interbreed with American rabbits.  different number of chromosomes

Ruth Stout style market garden, is it worth it?
I've just been thinking I want to move to this method too.  I've not been happy with the wood chips approach since smaller seeds just don't work as well but grass invaded anyway.  gotta find a way to transport hay though to my city lot.
show more
3 years ago
market garden 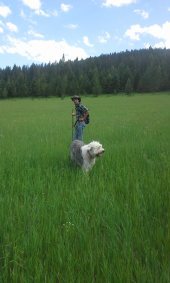 Scything: But What Will the Neighbors Think!
So anyone with scythe experience have back issues?  low back, bulging disk, SI joint etc?  I'd love to learn, but have been stymied by finding too much pain for some of my wishes.
show more
4 years ago
scythes

Xisca Nicolas wrote:In no way you can or should hide your emotions, but you can HOLD them better.
You can contain them,
in the sense of giving them a bigger container.

Let's say emotions are like milk boiling in a pan....
You just need to grow a larger pan yourself, so that the milk does not go off board.

This is a process, not something you do overnight...

Beautiful way to say it
show more
4 years ago
homestead

Introducing Children to Livestock Slaughter
a line of thought I share often is... EVERYTHING DIES... the only question is when, how and for what purpose.
In the wild an animal would die at any time of predation, disease or starvation-  none of which take very long when there is no shelter nor veterinarian.
In domestication the animal eats better, has more shelter, isn't (hopefully) predated for at least a set period of time.  then. if we do our job right, they have a quick and low-suffering death.  they even have a purpose of feeding us or others.  and in permaculture they also have had a purpose while living of tilling, fertilizing etc.

Dan Ohmann wrote:R Ranson - Thank you for the feedback.  I'm not sure that my son was picking up on my feelings because I was being real careful about that.  After the slaughtering, I got myself together and went to get him at grandma's home.

He asked on the way home if the "man who slaughtered the sheep" had left yet.  I said "yes".  He asked, "are they killed?"  I said "yes".  He only said "I didn't get to say goodbye".  Ugh... I forgot to have him say goodbye before he left.  There wasn't any conversation about it beyond that and I was careful not to express any sadness in front of him.  But I think you're absolutely correct in that it would be very easy for him to pick up on my feelings I was projecting.

I really think he will be fine with it.  The adults thinking he won't be fine is more of the problem, I'm coming to realize.  But this time around, I think it was best he wasn't there since they were pet-like.

As for the calm death, it didn't quite happen.  Things didn't turn out like I had hoped.  My plan was to lead the lambs with alfalfa pellets (they were "bucket trained") to the kill zone and they would just be snacking on some pellets and then the lights would go out.  The butcher had a different plan.  It wasn't horrible but it wasn't the low-stress occasion I was hoping for.  It was a disappointing way for all my extra care I had given them to come to end.

Unfortunately it is NOT POSSIBLE to hide emotions from children. And it is also not even desirable.  what they need to see is healthy acceptance of emotions in you so they can learn to do the same in themselves. so hiding emotion teaches them to hide their emotion or to consider it shameful... Goodbye would have been helpful of course, but it's ok.  Don't worry, one instance of anything is not going to set them on a problematic path.  you are there and you love them very well, so even your mistakes will be a good part of their learning!

I totally get the distress when the quick easy death doesn't happen.  when I've had to kill my laying hens who are sick or injured, I had to try several times due to my own lack of practice and my own 'wincing' which make me less than coordinated.

Introducing Children to Livestock Slaughter
as a family therapist I want to emphasize that the most important part is your own emotions.  prepare them with matter of fact information as early in life as possible.  give young ones a pass and not as young ones an option.  but just like dogs develop phobias of what their 'mothers' fear, children absorb the emotions and the beliefs about a situation which they see and feel, more than what they hear said or explained.  I think it was good for you to face your way through it once without them.  next time you will be more matter of fact and will more easily accept how awful it feels to do it.  The children will then feel your confidence and your ability to absorb the emotions along with the emotions themselves.
show more
4 years ago
homestead

are there currently millions of permaculture millionaires? (the story of Gert)

Dougan Nash wrote:I agree with the sentiment of Gert, but she just conveniently started with a few acres. I know there are a lot of people like me who want to dive right in but land is expensive. I am also (like many in my generation) burdened with student loan debt. Half of what my wife and I make goes towards minimum payments. We were young and dumb and 8 years later, no sign of it ending.


Come to St. Louis Missouri --buy cheap derelict house on auction that has a Land reutilization authority vacant lot next to it. start rehabbing your house and start permaculture. vacant land is $175 all you got to do is promise to keep it clean and not overgrown. Lots of options here. Puultry rabbits included

People are basically kind
I hurt my back right before a bunch of Alpine strawberries were delivered to my door;;; which needed to be planted at three different locations. I was having lunch with my colleague who is a very busy mom and professional and she just said, where do they need to go? can I plant them for you? she doesn't normally garden! I felt so loved.
show more
4 years ago
meaningless drivel

Perennial plant based diet
I've read that Nitrogen fixing trees like Mimossa, redbud, Locust have edible (if hard) seeds. anyone tried them?