Quinoa as a companion plant
That's interesting, Quinoa must grow differently at altitude, I've never seen it more than a few feet tall. I thought birds weren't supposed to like Quinoa as it had a bitter coating that had to be washed off before it could be eaten. Thanks for the info.
show more
8 years ago
permaculture
Quinoa as a companion plant
I've noticed that the local farmers have planted a small quantity of quinoa along with their fields of corn and I was wondering what the benefit of this could be? The farmers who have planted it haven't been present to ask unfortunately, if I did they may not know why as traditional knowledge here has been reduced to lore. It may be they simply plant it as an additional crop although the quantities planted are so minimal I can't imagine they would get any significant quantity.

The biggest guinea pigs get up to 2-2,5 kilos so 5.5 pounds or so, unfortunately the big ones are mutants and I fear have a lot of congenital problems. The biggest sign of their mutation is the number of toes, it's typical for them to have 6 toes or more on each foot and it's not uncommon for them to have more. I want to engage in a breeding program to try and keep the size but improve the overall health of the animals - I bought a pair last year but then had to leave the country so they became dinner. Since then my wife hasn't wanted to keep them in our apartment, we're pretty constrained on space so I understand. Next year we're hopefully going to have a house in the country so I can try and start again then.
show more
8 years ago
rabbits
Store bought rabbits for meat production?
Thanks, that should help me when I come to picking. How can you tell how much bone to meat there is? I'm guessing I'll be buying young rabbits, do you check the mother?

I'll maybe be heading by where they sell rabbits this Saturday, if I get some photos of what's available I'll post them.
show more
8 years ago
rabbits
Store bought rabbits for meat production?
I like the idea of keeping rabbits as a meat source but here in Peru I've never come across anyone using them for anything other than a pet.

Could regular pet rabbits be bred to be meat varieties - what do meat varieties look like so I can try and see if they're being sold as pets. If not what characteristics should I look for when choosing?

Matt.
show more
8 years ago
rabbits
Californian (Peruvian) Pepper Tree Oil
I've been drinking pepper leaf tea for the last day and I quite like it. The tea is peppery to taste but with no heat, after drinking the tea my sore throat and blocked nose feels remarkably better and I think has been getting better overall - that could just be circumstantial though. I was wondering if it would cause any digestive issues but none so far. The one thing I've learnt is to use boiling water on the leaves, when I pour boiling water over a white film appears on the tea (which I'm guessing is the oil) and the tea has a stronger flavour. If I use water that has been sat in a thermo I don't have the same effect.

Another thought I've had is the anti-parasitical effect. The water in Peru is teeming with parasites (most notably Giardia) and it's pretty hard to avoid contracting them even when you boil all the water you drink. I'm wondering if drinking the tea on a regular basis will reduce the chance of any problems.
show more
8 years ago
trees

Joseph Lofthouse's "Landrace Gardening: 2014 Progress Report" in Mother Earth News
I just read the first article he posted on Mother Earth News and it mentions he grows potatoes from seed. My grandfather talked to me about this once and said that there was a risk that new varieties of potatoes could originate and then there is the danger that the tubers could be poisonous, is this a risk at all?

How easy is it to get potatoes germinating from seed? I'd imagine they'd be pretty easy, like a tomato as they're related. We have a dearth of potatoes here so it'd be an interesting experiment.
show more
8 years ago
permaculture 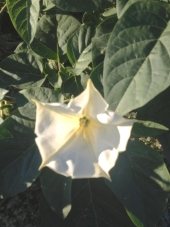 That doesn't look like a Brugmansia to me - I've only ever seen a Datura once but from what I know I think that's what you've got. Brugmansia's are trees with downward growing flowers, all the ones that grow here are anyway.

I imagine there wouldn't be any issue with mulching it from a poison perspective. The chemical that makes it poisonous is Atropine, this slows the heart or stops it if you take too much. I can't say 100% but I doubt that this would affect other plants or pose any risk of getting absorbed by others. One thing to take in to mind (at least with Brugmansia) is that they are listed as a hyperaccumulator , I've read that Brugmansia take up heavy metals from the soil - there aren't any details on wikipedia what exactly they take up. If you have contaminants in your soil the Brugmansia may have concentrated them and so mulching it could lead to you releasing them again.

Matt.
show more
8 years ago
plants
Californian (Peruvian) Pepper Tree Oil
I started reading up on potential uses for pepper tree seeds today as I'm soon to be inundated with them - I was originally thinking of using them as chicken feed but it appears that they could be harmful in any quantity, from that route I am still thinking of experimenting with them as an anti-parasitical medicine (that's one use according to folklore, although it's in reference to humans). Whilst reading up on them I found references to the benefits of pepper tree oil, anti-biotic and anti-fungicidal properties. Both the leaves and the seeds contain the oil but the seeds are 5% oil whereas the leaves are just 2%.

The seeds should be ready in the next month, I'm thinking of trying to boil them in water to extract the oil. I don't have a press so I can't think of any other options without equipment. Any other ideas of how I could go about extracting the oil?

The next question is what tests I could do to prove efficacy?


'In Peru, the sap is used as a mild laxative and a diuretic, and the entire plant is used externally for fractures and as a topical antiseptic. The oleoresin is used externally as a wound healer, to stop bleeding, and for toothaches, and it is taken internally for rheumatism and as a purgative. In South Africa, a leaf tea is used to treat colds, and a leaf decoction is inhaled for colds, hypertension, depression, and irregular heart beat. In the Brazilian Amazon, a bark tea is used as a laxative, and a bark-and-leaf tea is used as a stimulant and antidepressant. In Argentina, a decoction is made with the dried leaves and is taken for menstrual disorders and is also used for respiratory and urinary tract infections and disorders.'

Applying to wounds, well i'm cutting up my hands pretty good as they toughen up so I could test that out. I'm heading to my land tomorrow so I may bring some fresh leaves back and try and make an infusion from them. One use i've read about is anti-viral, I've got a sore throat so it will be a test of sorts.

show more
8 years ago
trees
Peppercorns as feed?
I'm just musing here - chickens scratch around and eat up seeds right? On my site I have an abundance of Pink Peppercorn (Californian Pepper Tree) trees that produce masses of seeds every year - would chickens turn their noses up at these? Has anyone ever given black peppercorns to chickens before? Pink peppercorns aren't the same species as black pepper but I think they're basically the same.

Pink peppercorns are anti-parasitic (or so local folklore says) so even if they couldn't be used as a viable feed they could be provided as a supplement.

Thanks for your thoughts.

The fruit and leaves are, however, potentially poisonous to poultry, pigs and possibly calves.

. It doesn't suggest how or why and there is no online link to the reference. As a sidenote, I don't have chickens yet, just wondering for the future.

EDIT II - Just found this thread on another site http://eattheweeds.com/forum/index.php?topic=1510.0, describes the peppercorns as being a mucous irritant so not suitable as a feed. I think it potentially could be used against intestinal parasites though - worth testing in small quantities.
show more
8 years ago
chickens