Protecting our forum from propaganda, polarization and failed communication
Would an unknown Paul Wheaton, just starting out in Permacultue, get deleted and eventually banned from permies.com for all his radical and untested ideas?

And then feel free to replace Paul's name with other highly opinionated curmudgeons such as Joel Salatin or Bill Mollison.
show more
5 years ago
communication

My Time-stacked Temperate Food Forest - A Video Diary
The best part of giving a garden free reign to do as it wishes is the mind-boggling life forms that pop up: 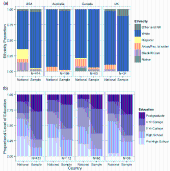 Recently published "study" on permaculture
I had no real problem with the article. I think it was rather spot on with most aspects of permaculture.

Yes, the majority of people who call what they do "permaculture" are white. I hazard a guess that this is because most while people have found permaculture, and are making a journey back to their ancestral roots. Whereas most indigenous or "coloured" practitioners are simply doing what they've always done, and have never even heard of the concept of permaculture.

That most "leaders" in permaculture are males is neither a good nor a bad thing in my opinion. It comes down to what the definition of a "leader" is, and whether it's necessarily something worth striving for.

What particularly caught my attention was the part, "...income was relatively low, but the level of education and homeownership were higher than national averages." This summed up for me the concept of permaculture by a person who doesn't "get" permaculture. The use of the word "but" in there showed me that a typical expectation is that people with a high education who own their own homes should have a high income. I mean, it stands to reason, right? Perhaps educated people who discover permaculture soon realise that if they pay down their personal debt then they don't NEED a high income, and can live a perfectly comfortable life on a small income with heaps of free time and personal liberty.

All in all I thought this was a perfectly honest and accurate portrayal of permaculture from the viewpoint of an outsider looking in.
show more
6 years ago
ulcer factory
Eco sewage treatment
It seems to me like you want to shit in your drinking water... and then almost immediately you want to efficiently and conveniently get the shit out of your drinking water.

This is quite a dilemma.

Part of the problem solving process in permaculture involves rephrasing the question in such a way that the answer presents itself right before your eyes.

WHY do you want to shit in your drinking water?
show more
6 years ago
toilet alternatives
Macro Effects of Swales on Watershed

wayne fajkus wrote:Mosquito breeding and fungal disease both come to mind. My swale has been full for 3 months. Same thing happened last year. While the fungal disease may have happened regardless, the mosquitos are a direct result of the swales.

But... with the swales come frogs, then tadpoles, then more frogs. They may be keeping the skeeters in check.

Errmm... swales should hold water for a few minutes tops before the water soaks into the ground. What you have sounds more like ponds or dams.
show more
6 years ago
earthworks
Macro Effects of Swales on Watershed
If the property upslope from me put in swales that caused a spring to pop up on my property in an inconvenient place, I'd move whatever was being inconvenienced.

Because that's a spring! I now have a spring!!!

My Time-stacked Temperate Food Forest - A Video Diary
When we first bought our bugout location, I had just learned about permaculture and was very keen to begin mass plantings of fruit trees in order to become self-sufficient in food. I bought hundreds of dollars of fruit trees and excitedly planted them throughout the existing bushland in expectaction of a huge bounty of food that summer.

Within weeks, kangaroos and rabbits had eaten all the fruit trees.

Something told me that this method wasn't sustainable. My next plan was to fence off 2500 square metres, basically a 50 metre by 50 metre square. 200 metres of 1.8 metre high poultry fence with rabbit netting dug in at the bottom. Now we've all heard legendary stories about how high kangaroos can jump, but kangaroos are inherently lazy. 1.8 metres is pretty high. Much less effort to just go around. And since I put that fence up, no kangaroos have ever jumped in. So this was good! No pesky herbivores to destroy my expensive fruit trees. Next winter I spent hundreds more dollars on fruit trees and planted them throughout the fenced area in expectation of a huge bounty of food that summer.

As soon as summer arrived, the dry relentless heat killed all the fruit trees.

By this time we had sold the suburban McMansion and escaped out to the property to live in the shed while I built our rammed-earth home. Despite carting buckets of water from the water tank all summer, the fruit trees just shrivelled up and died. The parched, inorganic gravel was wicking the water away faster than we could deliver it. Only the four pistachio trees survived, a testament to their unkillability.

I'd had my wakeup call. Now it was time to "permaculture the shit out of this", to paraphrase people marooned on Mars. Step one was to bring the monster 2500 metre area down to something more manageable. In the winter of 2015, I divided the orchard into 5 smaller areas of 500m2 with a chicken coop in the middle acting as a hub for the 5 yards radiating out, thus:

The area marked, "Current Food Forest" was where I would begin doing actual permaculture. My plan was to base the plantings on my newly designed Poogelmid system of humanure composting. This consists of a square of hay bales: 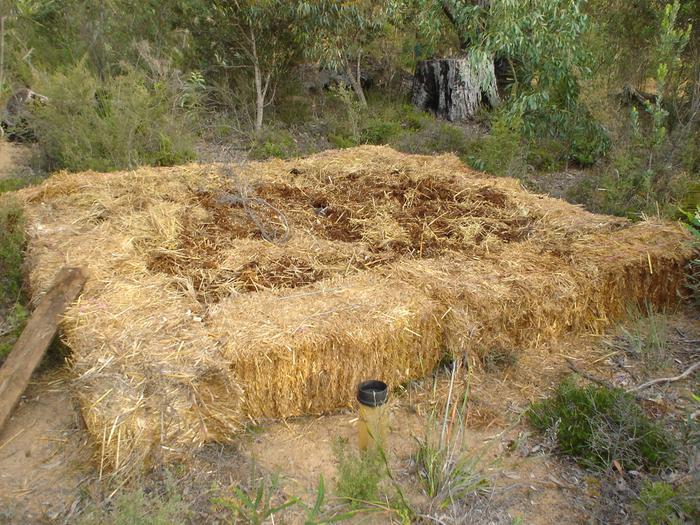 With logs and wood scraps thrown in the middle, then covered with humanure. Once each square was filled, another smaller square of bales would go on top and the procedure repeated until the pyramid was completed: 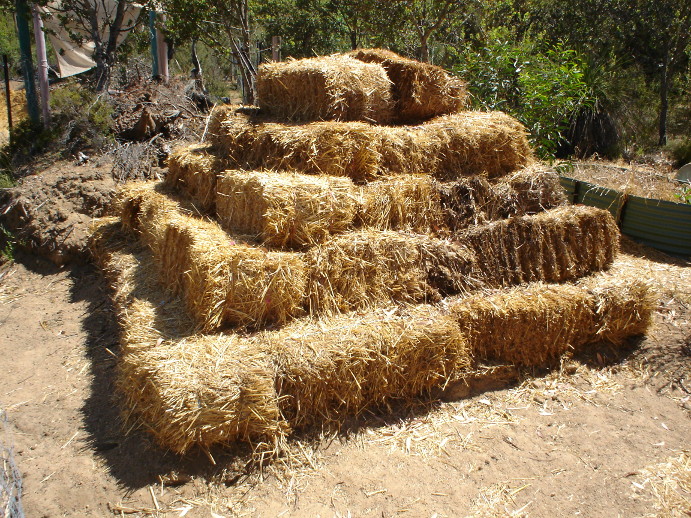 The word "poogelmid" is derived from "POO" (humanure) "huGELculture" (the wood scraps) and "pyraMID" (the shape formed by the smaller layers of hay bales. Thus, "poogelmid".

Rather than complete and fill each poogelmid individually (which would take years) I laid out as many base squares as I could fit into the 500m2, shoehorning them in between existing native trees and allowing enough space between each one to comfortably move a wheelbarrow or yard cart. Now the multiple base squares could be used to throw scraps and sticks into while they were waiting their turn to receive their humanure goodness.

Next I began digging small shovel-width trenches around the bases of the poogelmids, throwing the dirt either onto a completed poogelmid, or into the base square of unstarted ones. The trenches were filled with mushroom compost, and a seedmix consisting of legumes and garden vegetables. Fruit trees (this time grown from seed for free!) were planted a metre apart around the base of the poogelmid, with paraserianthes (a native albizia-like leguminous small tree) seeds grown between them, once the seeds started appearing in December. 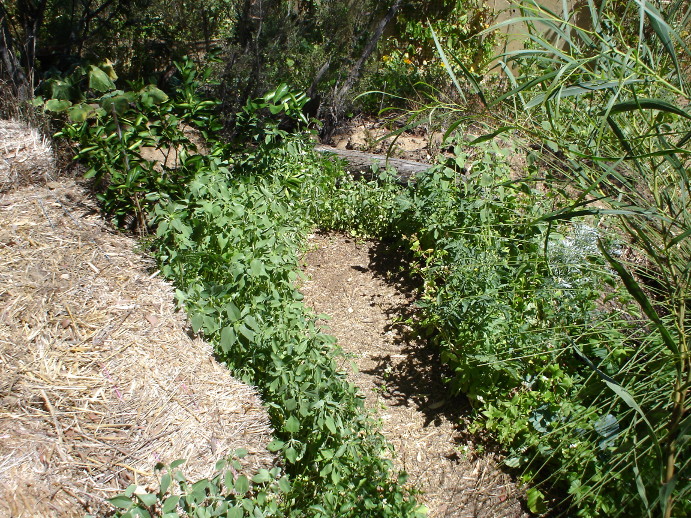 This time when the dry relentless heat of summer arrived, I wasn't struggling to keep expensive fruit trees alive. I was simply watering my vegetable beds! The microclimate and wind-tempering of the hay bales, combined with the mass of soy, chickpea, buckwheat and various vegetable foliage completely covering the tiny fruit tree seedlings meant that much less water was required. And the addition of actual FOOD to our diet produced by the garden was a much needed psychological boost. There is a massive difference in morale going out to the garden on a stinking hot day to see what goodies the garden is going to provide for lunch today, instead of trudging out to see what trees the heat has killed today.

And so a year has passed. No fruit trees died over summer. Cover crops grew, went to seed, died, and volunteers started popping up everywhere. Vegetables are ongoing throughout the garden. Fruit trees are going dormant for the winter, and the paraserianthes (now 6 months old after the source tree produced seed in December) are now around a metre high, as expected for this age. Paraserianthes are a rampant, weed-like leguminous tree, and 2 that I planted from seed the year before grew to 3 metres in a year. I expect these to begin forming canopy over the emerging fruit trees by the time they reach a year old, in December 2016.

To mark the first anniversary of my budding food forest, I made a video tour of the area. Two points to note are:
1. This is my first ever video narrative, so please forgive the pregnant pauses while I think of what to say.
2. I still insist on calling the paraserianthes trees "albizia" throughout the video. I promise to get the name right by the two year video!