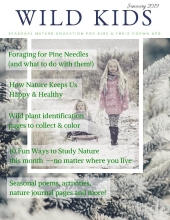 Free nature magazine for kids and their grown ups
What a beautifully-done magazine - thank you for creating it and for sharing it here!  If you do continue into 2020, perhaps you could create a Patreon page so that people can help support your efforts if they so choose.
show more
8 months ago
kids

Plant ID (not Malabar spinach)
Thanks for your response, Tyler.  Hmmm, the leaves do look a lot like sweet potato leaves, don't they?  I don't recall the stem/stalk of sweet potato to be segmented like these are, though, and I've never seen a sweet potato so upright in form - usually they're more trailing, aren't they?  I wonder if it's related to sweet potato, though.  I'll have to dig down and see if it forms tubers (usually I propagate by cuttings, as they root very easily).
show more
3 years ago
plants

Plant ID (not Malabar spinach)
Does anyone know what this semi-vining (gets long and tall and weaves in and out of a wire fence, but has no tendrils) perennial green is?  The person I originally got it from called it Malabar spinach, but on looking at photos of Malabar spinach (Basella alba/rubra), it appears quite different.  The leaves of this plant are thin (not succulent, as B. albas' are) and pointed, not rounded, and as I mentioned above it has no tendrils and does not curve or twist around its supports.  It is hardy in my Zone 7-8 yard, but dies down after a frost, and does equally well in sun to mostly shade with very little water (though it requires more water in the sun, of course).  I'd love to know what it actually is!
show more
3 years ago
plants
Coffee grounds as substrate?
Has anyone here successfully used coffee grounds as substrate for growing mushrooms? I've got ongoing access to a pretty large quantity of free used coffee grounds from the local coffee shop, and would love to put them to additional use (besides already using them in compost and as cover material for my composting toilet). I'm particularly interested in growing oysters and shiitake, as well as starting a batch of king stropharia to then inoculate my mulched beds, but am definitely open to other types that might grow better on coffee. Any input would be appreciated!
show more
4 years ago
fungi

Hugelkultur for raised beds. Opinions?
Roy's response reminds me of another important point - if you're using more than a single layer of wood, be sure to add soil to fill in the gaps between chunks of wood before adding a second layer! This will reduce the amount of settling that will occur, as well as the potential for rodents to take up residence in the hugel.
show more
4 years ago
hugelkultur

Hugelkultur for raised beds. Opinions?
Looks great! Over the last couple of years, I've been "retro-hugeling" the tall raised beds I built several years ago, and I've found that it really does help to significantly reduce water use. Last summer was my first with one of these hugeled raised beds, and beyond the initial watering to get seeds started and established, I did not have to water the bed once during the summer. (And in my area, we generally get zero rain from the beginning of June through at least mid-September, if not mid-October.)
show more
4 years ago
hugelkultur
Limited space and limited sunlight. Growing tips?
Someone in my neck of the woods asked the same question in one of our facebook community groups awhile back, and I posted this response that may be of help to you, too! Most of these will do best/be most productive with at least dappled shade in our area, which usually is pretty warm in the summer (around 80-90F during the day most of the time, sometimes hotter; usually zero rain from June through September).

Oooh, fun! I've done a decent amount of research into shade-loving edibles in the last year, as I've started a new edible garden in my mostly shady front yard. Many of the following plants I haven't eaten yet, but have planted and are doing well so far; from what I understand, most of the fruiting ones will produce more fruit with more sun, but should still be somewhat productive in bright or dappled shade. Here's a list of what I've got planted:
Mint
Raspberries
Thimbleberries (a raspberry relative, native to the Pacific coast)
Rubus calycinoides (a groundcover-type raspberry, no thorns)
Lemon balm
Horseradish
Asparagus
Aronia melanocarpa (grown for its berries)
Gaultheria shallon (also called "salal"- a native grown for its berries)
Gaultheria procumbens (aka wintergreen, another native grown for its berries which yes, definitely taste of wintergreen! and for its leaves, which can be used to make a tea)
Arctostaphylos uva-ursi (aka kinnikinnick, a native grown for its berries)
Lonicera caerulea (also called honeyberry or haskap, grown for its sweet blue berries)
Viburnum trilobum (aka highbush cranberry)
Gooseberries
Currants
French sorrel (I've grown this with huge success in bright shade for years!)
Huckleberries
Violas (for their edible flowers)
Calendula (for their edible/medicinal flowers)
Turkish rocket (a perennial broccoli relative - this is growing quite well in partial shade in my yard!)
Good King Henry (a perennial spinach relative)
Mashua (a nasturtium relative grown for its edible tubers; I grew this last year in partial shade with great success)
Malabar spinach (a perennial, semi-vining green, somewhat frost tender)
Oregano (does *great* in partial or dappled shade!)
Thyme
Yerba buena (a native mint relative; does fine in even full, bright shade)
Alpine strawberries (grow these in the brighter areas for best fruiting)
Rhubarb
Catnip
Kale/lettuces/arugula/other greens
Claytonia (aka miner's lettuce; a delicious native springtime green in our area)
Stinging nettles
Cornus mas (an edible-fruiting dogwood tree)
Allium triquetrum (a wild onion that grows like crazy around here in the spring)
Cow parsnip (a native parsley relative with edible stems)
Aralia cordata (aka Udo, a large shade-loving shrub used like asparagus in the spring)
Polygonatum odoratum (a beautiful, fragrant shade lover, with apparently edible shoots and roots, though I've never eaten them)
Asarum caudatum (aka wild ginger, native shade plant used for ginger-like roots, apparently toxic in large quantities)
Pawpaw trees (*not* papaya, but Asimina triloba, a native to the eastern U.S. I put in a few last year to try, and which are doing quite well so far)
Camellia sinensis (used to make green and black tea)
Celery does decently in partial shade, and apparently its perennial relative, skirret (grown for its carrot-like roots) does, too
Hosta (edible shoots in the spring)
Medlar (an apple relative to about 6 ft tall, apparently does well in partial shade)
My quince tree has been doing well in partial shade for 7 years!

A few I haven't tried yet, but want to add to my yard:
Matteuccia struthiopteris (aka Ostrich fern, used for fiddlehead ferns)
Allium tricoccum (aka ramps)
Allium ursinum (bear's garlic)

David MacKenzie wrote:Great to hear, Emilie!
Did you use any particular technique to seat the seeds in the mulch?
David

Well, the favas I kind of punched in using a heavy rake (it's a relatively small area, easy enough to do by hand). The others I simply broadcast and let settle on their own with irrigation/rainfall. Because the mulch was fairly coarse, they were able to find gaps and settle in on their own (plus, I didn't want them to get *too* deep in the coarse mulch, because I figured they'd have a hard time coming up then). If you're using a finer mulch such as straw, you might need to do a little more to get the seeds settled in.
show more
4 years ago
cover crops

Experiment: Broadcasting cover crop seed over mulch?
I've done it two years in a row on top of wood chip mulch. The larger seeds, such as daikon radish, favas, and vetch have done quite well both years; smaller seeds such as clover and annual rye had very poor germination. This year, the second year I did it (without refreshing the wood chips, so they were more broken down), oats did VERY well along with the relatively large-seeded cover crops. The clover has better germination this year than it did last year, when the wood chips were coarser. These were all grown during the cold season.

Buckwheat did not germinate well for me last summer, but given the fact that some of the other smaller seeds had improved germination this winter, I'm going to try buckwheat again this coming summer.