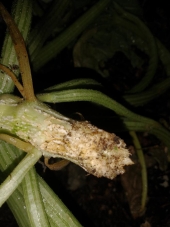 Raised death bed
Ok, I gave up trying to grow a garden in the presence of gophers/ground squirrels. I live in the woods and it would be impossible to kill them all. There is an entire metropolis under my garden. I had three beds raised on stacks of pallets. I put metal collars on them and that helped, although the game camera, at night, caught a large rabbit in one.

Following the "up is good" theory I started adding bathtubs set on cement blocks and that also works well, so far. In a hoop house I plant my tomatoes in stacks of tires, also with metal collars. The sheet metal isn't cheap but the tubs come from salvage yards and can be had for next to nothing. I think that I will try cardboard collars to see if the evil rodents can, or will, climb them.

Last year I began doing a little hugeculture by putting dried brush in the tub bottoms and adding dirt, chicken straw and compost. Even with the heat I seem to be watering less.

I don't see any ground squirrels this year. I hope that they've given up and gone home. This year is better for the garden overall, we got a better start than last year and even though it's hot hot hot the plants are coming on. I will say that it's taken far longer than it should have to outsmart the critters. They were just doing what came naturally and I wasn't.

On a related note, a few years ago I hauled home, from a yard sale, an old utility tub. I noticed that things planted in it, even sunflowers, didn't do well. This year everything I planted in it just flat out died. Same dirt, good drainage, same compost. I've decided that this is just a toxic tub. It must be made of something that is leaching into the dirt and poisoning plants. Something else to consider as we build our gardens.
show more
2 weeks ago
gardening for beginners

Snake in coop, thinking of letting him stay
Not so much about chickens, unless you count my mom. When my newly wed parents moved to the Florida pan handle they lived in a house raised on blocks, maybe to avoid the gaters?

One of the things my father did to earn money was to catch rattle snakes and sell the skins. (Apologies to the wildlife group noted above.) Early on he brought home a large king snake to keep other snakes out of the house, kind of a guard snake that also kept the house rodent free. My mother said that she got used to having it around but had to learn to watch her step.

I would like to have such a snake under my chicken coop. I have a niece who is a herpetologist. She advised putting additional rock around the coop and a pan of water. Welcome snake!
show more
3 weeks ago
chickens

Excessive heat warning keeping chickens cool.
Thanks for the suggestions. Actually my garage stays about 65 degrees because I live underground. The cage is near one garage door and I think that if I open the door and place a fan facing the cage they should stay fairly cool. Alternatively they could stay in the garage for a few days as I have a large ferret cage there. I just need to dig it out from behind the summer patio furniture that needs to be moved anyway. (I wonder how they would deal with such a large temperature differential.)

In the meantime I have pulled a hose down to the cage so that I can keep the cage cover damp. Someone laid an egg yesterday so things are looking up.
show more
3 weeks ago
chickens 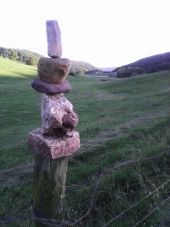 Permaculture rocks - no, I mean actual rocks
I'm thinking that actual construction of stone steps is beyond me. Thanks for the connections. Maybe I will put up a hand railing on one side. There are raspberry bushes there.
show more
3 weeks ago
permaculture design

Permaculture rocks - no, I mean actual rocks
Who has built steps with rocks? I need a more stable way to get up to my roof top garden. Steps look complicated so this may not be the way to go, especially given that most of our rock here is round. Any ideas?
show more
3 weeks ago
permaculture design

Excessive heat warning keeping chickens cool.
We are also dealing with the heat wave, 106 yesterday, 113 predicted today. My two hens have a coop and pen under an overhang that extends from my garage. They are shaded by a large board from the western sun and a concrete retaining wall on the north keeps them snug in winter. But they seem to be unhappy in the heat, have stopped laying. I will put ice cubes in their water, maybe freeze an alternate shallow pan, and put a damp cloth over the cage portion. I need to hunt up a fan.

They were a gift from a friend and my son tightened up the coop with hardware cloth, a good thing as something is trying to dig under. I have had chickens before and missed them, hence the gift. Thanks for all of the cooling advice. We don't want the ladies to suffer.
show more
4 weeks ago
chickens

FREE Natural Raised Beds
Great idea. I have looked into buying water tanks but old bath tubs from Restore or other recycle places are much cheaper. In addition to my three 4X4 boxes we have six tubs. I put them up on cement block to foil the ground squirrels and chippies. I did, last year, put old wood in the bottom of them, added compost and chicken straw then Glacier Gold garden soil.

Last year was awful for the garden, wet cold June delayed everything, then hot dry July, August cooked the rest. This year looks a lot better, although we had a freeze scare this week. I picked up some free(!) Tomato plants from a nursery where they were overgrown and crawling. Had to come up with more space but who turns down free tomatoes? I put boards between some of the tubs and will plant them in big buckets, let them sprawl out of reach of the critters.

The older I get the more I appreciate having had to outwit the critters by putting the garden up high. Go for it!
show more
1 month ago
gardening for beginners

Rhubarb Season in PNW some more ideas for culinary adventure?
Thanks for providing the recipe. Friends brought rhubarb salsa to a gathering this weekend, very good with chips.
show more
1 month ago
cooking 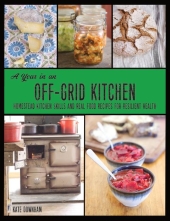 *Welcome Kate Downham, author of "A Year in an Off-Grid Kitchen"!
What a lot of work! What you've done benefits us all so please know that we appreciate it. Honey from our local apiary is wonderful and I look forward to using more of it with your recipes.

I suspect that over time more and more of us will end up off line, like it or not. So it's good to have additional resources such as your book. What's more important than the food we eat?
show more
2 months ago
cooking

Ergonomics of making cattle panel arches
I have to admit that last year was awful for tomatoes. And you can see why we had to replace a panel. This is in my rooftop garden and we do get some powerful wind, enough to bend a panel on one occasion.
show more
2 months ago
ergonomics