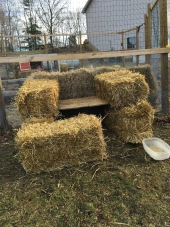 New to Ducks! What the heck are we doing....
We started raising ducks last year, too. Without really knowing what we were doing, we got four breeds.  We got two females and one male of the following: Indian Runner, Buff, Crested Whites, and Rouens.  We got them from Metzer's,  which sometimes throws in extra drakes when they send your order (we ended up with five drakes).  If you order from an online hatchery, make sure you have a plan to deal with excess males.

We realized when they hit maturity that we had too many males for the number of females, so we culled down to just two drakes.   To make life easier on the females, we chose the Indian runner drake and one of the crested white males (though we wish now we'd kept the Buff instead). Indian Runners are a lightweight breed, and Cresteds are a medium weight breed. We found it preferable not to have a heavyweight male trying to breed a lightweight female.

One or two drakes should be sufficient for the number of ducks you would like to have.  if you are sure you don't want them for meat, I would get one or two Indian runner males; runners are very good foragers, and the females produce a lot of eggs.

At the bottom of my comment is a picture of our duck house for ten ducks and two geese and here is a description of how we built it:
https://thesunshinethiryblog.com/2016/12/27/building-a-duck-house-for-a-michigan-winter

Their run is fenced in and has two strands of hot wire, so they are protected from predators and don't have to be locked in the house at night. Honestly, they usually don't go in the house other than to lay their eggs. Even in the coldest weather they almost always prefer to be outside in the run.  If you can give them a very secure run, you really don't need much of a structure for shelter. I built one like this around the edge of the pond and it's more than sufficient:
show more
3 years ago
ducks and geese
rabbits with chickens and ducks?
Hi there,
Our ducks and geese share a large run with our rabbits. During the day the waterfowl come out on to the pond and I let the rabbits out of the hutch to run around the run.  A couple things I've learned:

1. The rabbits will go up the ramp into the duck house and get into their food, so I remove the duck feed pan during the day.

2. The ducks and geese will chase the rabbits and bite their tails if they are out in the run together, but the rabbits are much faster and can get away.

3. I like the idea of a small tunnel into the hutch to keep out the ducks and chickens.

4. Get two female rabbits.  My brother had two males and they were aggressive with each other.
show more
3 years ago
rabbits

Will ducks or geese eat snow to stay hydrated?
We also use heated 5 gallon water buckets here (in Michigan) for our mixed flock of ducks and geese. I too have noticed a great deal of muck and sediment in the bottom of the buckets when I change them daily; to me this says they really do need to rinse their beaks and bills.  I wouldn't rely on snow to be their sole source of water myself personally.

The outside water lines had to be turned off so they wouldn't freeze. We use a 5 gallon bucket filled up in the bathtub, which we carry outside to refill and rinse their water buckets.

Regarding shelter, my husband just finished building them a very nice wooden structure. When he was almost done, he was chatting with an old-timer farmerwho told him, "Shoot, you don't need to build them a house. You can just get an old pick up truck cap!" My husband was like, "D'oh, what a great idea! Too bad I didn't know about that a few weeks ago."

show more
4 years ago
ducks and geese
Ducks always molting--Why?!?!
I wonder if they could be carrying too high of an internal parasite load?  Might be worth it to have a vet do a fecal float test.

I think I'm going to try this natural autumn deworming protocol with my ducks, geese, and chickens:

Basically it entails offering fresh pumpkin, chopped garlic, grated carrot, and dandelion greens.  The herbalist who wrote the protocol explained elsewhere that she developed this regimen while having a vet monitor the parasite load in her chickens and it was found to be beneficial. I figure it can't hurt to try that although my flock isn't showing signs of having worms.

Anyway, if you are still having trouble with them not laying even with the increased feed, consider checking for internal parasites.
show more
4 years ago
ducks and geese 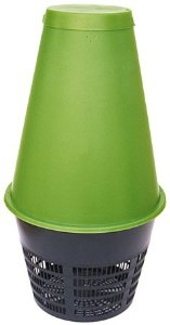 What to do with daily kitchen waste?
Recently I was reading a book on homesteading and permaculture and the author referenced green solar compost digester cones. I looked them up and found several websites offering them. Here's a picture of what they look like: 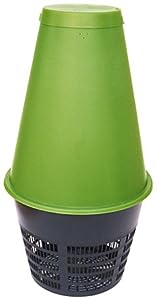 Apparently what you do is dig a hole about 18 inches down and bury the basket part in the ground and backfill around it.  The top pops open and you insert your daily kitchen scraps in there and they fall down below ground into the basket part, where they are digested rapidly.   From what I have read, you can use any kind of kitchen scraps, including vegetable peels, fruit pits, meat scraps, and dairy. The digestion is supposed to be so rapid that you don't need to empty it except maybe once a year.  I have ordered one and intend to put it in my huckleberry bed, which is near the front of the house, so it is easy to bring out whatever kitchen scraps I don't intend to feed to the chickens every day.
show more
4 years ago
composting
Anyone Bought Fruit Trees from Arbor Day Foundation?

<blockquote>Sunshine, buying trees at the end of the season had not occurred to me--but I am certainly happy to take advantage of deals. Are there any special considerations when planting a fruit tree or shrub in the late summer or fall? I'm in New England. Everything I read suggests planting in late winter/early spring...</blockquote>

I'm in Michigan, and I have yet to lose a fall-planted tree. All that I do is mulch very heavily around them with grass clippings and shredded leaves. You can even go to a big box store like Lowes or Home Depot at the end of September and find some outrageous deals on many different kinds of leftover trees. They will look a bit ragged, but they're usually only a few dollars. That frees up money to spend on other kinds of plants from small local nurseries that will be a bit more expensive.

For your blueberries, remember that they need acidic soil. You may need to add some peat moss and coffee grounds around them. I found this article on using hugelkultur to grow blueberry bushes:
http://midwestpermaculture.ning.com/m/group/discussion?id=2716248%3ATopic%3A58675

With your pears, watch out for Cedar Apple rust, because it affects pear trees too. We have a large mature pear tree on our land, but the fruit is sometimes blighted due to the cedar trees growing on my neighbor's property. Under our pear tree, I planted gooseberries, red currants, and rhubarb:
http://thesunshinethiryblog.com/2015/06/16/my-first-food-forest-guild/
show more
4 years ago
trees
Anyone Bought Fruit Trees from Arbor Day Foundation?
I bought trees from the Arbor Day foundation last year. Almost none of them survived. They were extremely small, some of them barely even twigs, and some of them appeared already to be dead when they arrived. The quality was extremely poor. If I want to save money, what I usually do is wait to plant my trees until the end of August. Places like Stark Brothers start to clearance out many of their fruit trees at that time. Of course, the selection is not as good then, but the prices are often 50% less than in the spring.
show more
4 years ago
trees

Our Floating Duck House
Genius idea! My husband and I want to begin keeping ducks in the spring since we have a very large earthen pond but we weren't sure how we could keep them safe from the coyotes. A floating duck house might work!
show more
4 years ago
ducks and geese
Ponds - Scenarios
Hello Sanjay,
I can't answer all your questions, but I can give you some information about stocking fish. What kind of fish you can stock depends on how deep your pond will be and how warm or cool the water is. Deeper ponds are colder; shallow ponds will be warmer.

Here is some informtion about temperature requirements for various fish:

Trees and bushes around a man-made pond?
Thank you for the replies!

I am not sure if the bottom is sealed with clay since the pond was built by the previous owner. Our soil naturally has a lot of clay in it.

I'm also not sure what is meant by the term " the dam" of the pond. I'm a pond newbie and just learning how to care for the pond properly.

I think to be in the safe side we will cut the tree down and use it for firewood instead. I'd rather put a lot more blueberry bushes around the perimeter anyway!

Thank you again for the responses!
show more
5 years ago
ponds