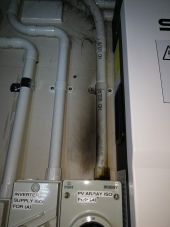 Solar wiring standards to deal with water?
Yes, it's a grid tie system. On seeing the fire I shut down the DC isolator ( well, in retrospect that didn't do anything because it was shorting ), the inverter and the battery bank.
I managed to smother the fire with some cloth but then I could see it start up again so called the fire brigade.
They stood there and watched it get hotter and hotter even though they smothered it with CO2 and fire suppressant powder.  That's when someone got on the roof to disconnect the panels.
DC isolator fires have been the most common cause of rooftop solar fires in Australia as regulations mandated that the DC isolator was to be installed on the roof; where water got into them.
I believe they're changing that requirement now.

The Clean Energy Council (CEC) is among those advocating for a rule change. A recent CER report identified water ingress in DC isolators is the biggest safety risk associated with rooftop PV. The CEC has said that including the DC isolator inside the inverter, rather than as a separate switch near the inverter, is the best solution.

Solar wiring standards to deal with water?
I had a fire in the DC isolator in my basement just past Xmas.  There was a faint smell of smoke when I got up in the morning.  I was directed to the basement where I could see flames coming from the DC isolator. 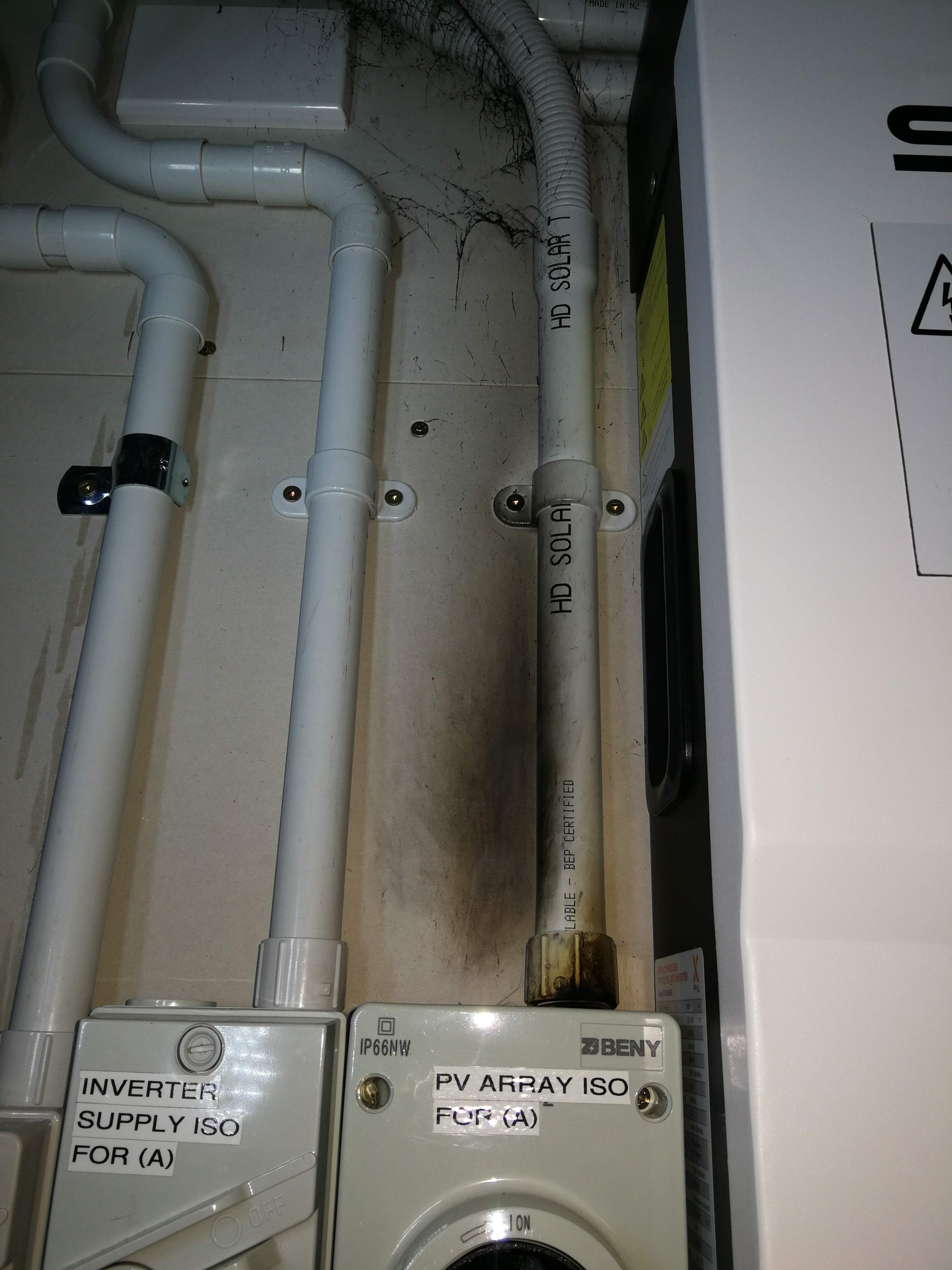 The fire was eventually extinguished by the crew of several fire engines, lots of CO2 and powder.
The power company guy went onto the roof to pull all the wiring from the solar panels as until then the firemen could not put the fire out with the fire being fed by the sun.

Anyway, water had got into the conduit and tracked right down directly into the DC isolator.  Another company came and replaced the cabling, and put grommets everywhere where there were none.  Another company had suggested a service loop be installed before the switch so that water could drop out of the conduit before it looped back to the switch but the repair guys said it was not necessary.  The water had entered the system not from the roof but where the cabling had penetrated the weatherboards.  An attempt had been made to waterproof it with silicon at that point but it clearly had not been successful.

What are the recommendations from the people here?  Should a low loop be installed before the DC isolator to stop any water from reaching the switches?
show more
3 months ago
solar

Cobbling up a workshop heater. With cooktop, and oven, 4 tons mass. 220mm batch.

Satamax Antone wrote:Modified the stove again. Laid some firebricks on the whole front of the "barrel" To cut a bit of direct heat.

And the final answer is, yes you can make pizza in my rocket.

Panel Orientation?
Just an update on this thread.

The system had to be disabled on the 28th December 2020 after I woke up to smoke coming from the basement.
Two fire engines later, and lots of CO2 as well as powder from their cannisters the heat kept increasing.  The lines company electrician then went onto the roof to pull all the cables from the panels so that the solar power wouldn't keep feeding the fire.

It was repaired yesterday but one of the hybrid inverters needs to be replaced.
The cause of the fire was water in the DC isolator which was on fire. This is a common cause of rooftop fires in solar installations in Australia but my DC isolators are in the basement.  We had thought rain water was being directed by conduit from the roof into the isolator, and the guys who came to repair installed grommets everywhere that they should have been before.  But water was found in the connection that penetrates the wall of the basement from the rooftop.  This had not been sealed fully.  I asked them to install service loops to stop water from entering the switches again, and they said it wasn't necessary as long as it was installed correctly.  Luckily I wasn't dependent on the solar system and still had access to the grid.
show more
3 months ago
solar

Cobbling up a workshop heater. With cooktop, and oven, 4 tons mass. 220mm batch.
I have a metal heat shield on my ceiling, and asbestos-lined walls around the fireplace.
show more
3 months ago
rocket mass heaters

Cobbling up a workshop heater. With cooktop, and oven, 4 tons mass. 220mm batch.
Can't you just cover the rafters with the ceramic fibre blanket as a temporary fix?
show more
3 months ago
rocket mass heaters

Rocket stove using only concrete blocks
Maybe your sticks are too wet, or the cinder blocks too wet. Do you get a fire going if you feed the sticks from the top?
show more
6 months ago
rocket stoves
Catalytic pellet stove?
I don't know if this has been sorted yet, but since catalytic stove allow for the combustion of the fuel at lower than standard temperatures this results in the release of more dioxins into the environment i.e. the air you will be breathing.  At higher temperatures these dioxins are incinerated.
show more
7 months ago
wood burning stoves 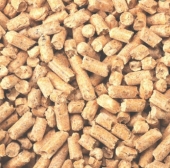 Burning pellets in a wood stove
You can cook inside as well as outside. I started to use wood pellets because they're cheaper than almost any other wood source in the shops.

Burning pellets in a wood stove

Phil Stevens wrote:Graham! MATE! That is Rube Goldberg stuff right there. How did it come out (taste wise, that is)?

Hi Phil.  Tasted just fine.  Took 2.5 hours to cook but other references said that this was standard for this type of "camp side" cooking on the side.
I've now bought myself a tripod so I can try this out in front of my chiminea!
show more
8 months ago
wood burning stoves