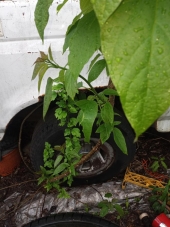 Southern Catalpa For Copice
Doesn't look much like Catalpa binonioides to me. It does look like that 'Tree of Heaven' though, which stinks when you crush the leaves. They grow 6+ feet a year in the first three years, down here in Texas. Coppice great! As in, they will pop right back up after you cut them.

Pecan Canopy - what goes well underneath
Hey all,

Some additional thoughts around juglone guilds in the South- I'm in North Texas, and here's what I've seen work:

East of Dallas, we get into that 'black gumbo' soil; great for cotton, miserable to walk through in the rainy season, and not well suited to cob unless you dig right under it to get your material. Here's a pretty good map of Texas soil, and here's a much more in depth one.

It sounds like you have a lot of drive to do this! That's great, especially for the earlier, exploratory stages of something like this.

Here's some of the book recommendations I would have for you:
The hand-sculpted house, by Ianto Evans
The cob builders handbook, by Becky Bee
the cobber's companion, by Michael G Smith

Other thoughts:
My understanding is that two stories with cob can be pretty challenging, and can require additional, non-cob structural elements. If you haven't built a structure, or especially built a structure with cob before, I would encourage you to get some of that under your belt before tackling a two story.
That being said, I love the idea of a lighter second story! A yurt type structure with a reciprocal frame roof or similar would solve both your issues at once, and provide a really cool look both inside and out. Other options that I could see working there would be a straight yurt, light timber frame, maybe with mostly glass or paper for walls (thinking old school japanese architecture) or similar.
Whatever you decide on, one of the most important things for any earthen structure is 'a good hat and good boots': You want that roof to extend out far enough that rain nor sleet nor snow ever get to hit your walls.
For energy: almost all of Texas is great for wind and great for solar. The least challenging and most cost effective way to do either is often to hop off the house and set up on the ground nearby.
Another nice thing about the Lone Star State is that in a lot of areas of the state, there are very lax building codes, compared to other parts of the country. When I've looked at rammed earth or cob, my plans always included having a hollow running baseboard to run the electric through, and another to run water through. Last think I want to do is build a wall or foundation, then have to tear it down to get at a pipe or a circuit I buried.
Speaking of foundation! Have you given much thought to that? Foundations can be tough in our part of the state, due to the high clay content soils. I've always been a fan of rubble trench foundations, for earthen walls. In the structures I've built, they've served me really well for that purpose.
Finally, have you thought about gradual building? My current plan is to start small, building a structure just large enough for our needs, and then expanding it as time and money allow. Here's a thread with some cool thoughts on that process.

Hope this information is helpful!
show more
7 months ago
cob 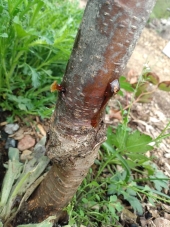 Canker on Stone Fruit Trees Success Story
What a triumph! I had no idea you could have success eliminating canker like this. Thank you for sharing!

Did you apply anything to cover the exposed area, or just let it heal over naturally?

You mentioned using an oil for treatment after the fact- was it neem oil?

Did you remove the woodchips, or did they heal up with the same woodchips around?
show more
8 months ago
fruit trees
Regenerating Oklahoma Cross Timber/Prairie Woodland
Howdy Benjamin,

Great to hear about your project! I'm at the opposite end of the Cross Timbers, down in Texas just North of the DFW metroplex. I'll send something purple your way, a document I've been working on listing the woody and not woody plants I've either worked with or plan to work with down here, hopefully some of that will be useful for you! 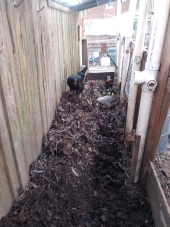 Locust pods and leaves
I bet they'd make good char! Probably hard to get them dense enough into a container to make it worth the burn, but I'm not biochar expert.
I'll bet they ferment, too! 20-40% sugar content, or so I read.
For me, I pull the seeds out anyhow (more bean trees), and lumps in the compost have never bothered me any!
show more
9 months ago
composting

anyone have a Berkey water filter? How you like it?
Another yea vote- I've had mine for 4 years now, very happy with it!
show more
9 months ago
wells and springs
My hints for good everyday bread
Incredibly helpful! I would never have thought to add pureed fruit, and I'd never heard of the Enchanted Broccoli Forest before. Thank you for the helpful tips.

I see a 'The New Enchanted Broccoli Forest' from booksellers, do you by chance know if its worth seeking out the original, vs the new one?
show more
9 months ago
bread

Locust pods and leaves
I've seen locust pod bits still holding together after 30 day or 90 day compost, but not big enough that it bothered me. There's a lot of sugar in those pods! Makes them helpful to get a compost going. The big worry for me with locust (if you're talking Gleditsia triacanthus) is the thorns and the seeds. The seeds will happily sprout after a trip through the compost heap, and those thorns are wicked, wicked things. I use them as nails around the house, fun little conversation piece but they'll go straight through glove, shoe, hand, foot, tire, etc.

show more
9 months ago
composting
Quickening the sheet mulching process
I wonder if the perfect is the enemy of the good, here.

Building a well mulched garden bed with some basic soil amendments will provide everything you need to grow a garden. That same bed will be better the year after, and the year after that, etc, but that doesn't mean it won't work well year 1.