Seriously Mini Food Forest
Ooh, I like the idea of a tiny food forest. As for the root layer, jerusalem artichokes may be a consideration. The bonus is that one also gets such beautiful golden-yellow flowers from them.
As for rosemary, I, too, am in zone 7A-B and have a large rosemary in a large pot that is thriving. I give it absolutely nothing: no protection in the winter (we get snow 3-4 times/season that typically stays on the ground 1-3 days), no fertilizer, nothing. It isn't even in full sun. It gets sun maybe 3-4 hours/day, yet it's been thriving for many years already. What a hearty plant! 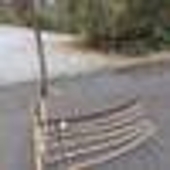 Question about this tool
Thank you, Jack, thank you, Benjamin, for your replies. It looks like it is a wonderful tool for what it was made for... cutting grain. Too bad it's not for grass. It sounds like I may have grown rather frustrated trying to use it for that purpose.

Question about this tool
Can someone tell me more about this tool? You can see that at the end is a scythe looking blade. It is also advertised as a hay scythe, or something like that. Would we be able to use it like a regular scythe? Our grass is very high at this point and I would really rather not get out the lawnmower for it. So I've been looking for a scythe in our area and this is one of the more affordable ones that came up. I'm just not sure if I could use it for the purpose I have in mind.
Thanks!
show more
3 weeks ago
scythes

elisa rathje wrote:our clothesline isn’t retractable but it is on an ‘elevator’— so once i hang the laundry out, i pull that bit up so it raises it 3 feet up. it keeps it all out of the foot path below. i failed to notice the fir branches above it on the other side and our first winter, the firs grew so heavy with snow they snapped the thing half off the house! not a sound one wants to wake to at 3 am. i pruned.

you might like our rainy day alternative (seems like every day this spring— not complaining!) which also uses a pulley: i made a film about it.


I really enjoyed your video, watched another from your channel, and am looking forward to watching the rest! Love the outside scenes with the chickens, goats, and ducks all frolicking together on your beautiful land! Informative videos, but also peaceful and soothing to watch. Thank you!
show more
3 weeks ago
home care
Excited about fruit for 2022
Figs - wonderful figs!
show more
1 month ago
fruit trees
Inspiring and very impressive abilities and projects on the linked youtube channel...
I happened to come across the below youtube channel, and after watching just one of the videos for about 5 minutes or so, thought that many people on this forum may appreciate this man's abilities, projects, etc.  He has so much to share and show, and has done so many projects on his off-grid homestead, that I wasn't even sure what forum to post his channel in. It fits here, but would also fit on quite a few others.
https://www.youtube.com/watch?v=lSt96KFFHxA&ab_channel=KrisHarbourNaturalBuilding

show more
1 month ago
natural building
Do it yourself shots
Revival Animal Health (www.revivalanimal.com) has all kinds of vaccines for dogs and cats, among other things. You can just call them and tell them that you want the correct needle size for a dog for vaccination and what vaccines you want as well, and they will direct you.
I have done a lot of research regarding vaccinations over the last 25+ years and would suggest spacing them out as well as not giving 3-way or 5-way vaccines. It is completely unnatural for anyone, dog, cat, or human, for that matter, to have the body exposed to everything at once as is found in the 3 or 5-way vaccines. It is asking a lot for the immune system to deal with such an onslaught of antigens, whether they be modified live or dead. Single-antigen vaccines make a lot more sense, given a few weeks apart, and are much more natural. Revival sells those vaccines as well.
As far as giving the actual vaccine, it is quite easy. Just pick up the dog's scruff a bit and give it into the skin there.
I would also recommend reading more about vaccinations, in general, and perhaps following the vaccination protocol recommended by Jeanne Dodds, DVM. She is known and respected all over the country and has done a lot of research regarding vaccinations. Her protocol can be found all over the internet. Here is one such place: https://www.animalhealthfoundation.org/blog/2017/12/dr-jean-dodds-dog-vaccine-protocol/

Either way, doing the vaccines yourself (except for the rabies as others have mentioned, which must be administered by a veterinarian) will save you a heck of a lot of money. The same is true for any type of deworming you decide to do. As far as dewormers for dogs, fenbedazole, sometimes known as Safeguard, is one of the best ones out there, covering a lot of worms, including whip, hook, and tape worms, and even giardia (not a worm, but a single-celled organism). Fenbendazole is also known to be one of the safest.

I had the same thought. Or that thing called a "pull along", or is it a "come along"? It's called something like that. It'd be a little bit of an investment, but it may be of help for another project as well in the future.
show more
2 months ago
permaculture
Burying a Deceased Dog
I am sorry to hear you are going through this with your dog. It is never easy.

We have buried four dogs in the last 6 years and I have found the best way for us was to simply lay the dog's body on the ground without making a hole, then covering the body with enough earth so that nothing shows through, then a few more inches on top of that. I make sure to use earth that contains some lime in it which, from my experience, exponentially speeds up the decomposition and also makes for no decomposition odors. One of our dogs was buried in the height of summer, and still no odor.  I have found that the lime is an important component of the earth covering the body. It doesn't need much at all. The earth we used had a ratio of maybe 1:300 lime to earth, but it made all the difference.

May your dog live out the rest of her life peacefully and pain-free.
show more
2 months ago
composting

Making a dog bed new again
I get comforters or thick blankets from thrift stores/ yard sales, etc., fold them a couple of times, and voila, a dog bed. When they get dirty, they get washed and hung out to dry on a sunny day.
show more
3 months ago
upcycling