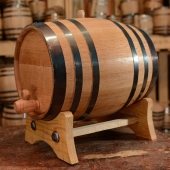 Is it Possible? A Spinnable Wooden Compost Bin
look at plans for root vegetable washers, they are often in wood.
show more
7 hours ago
composting

What’s this tiny growing thing?
I know them as birdsnest fungi, but yes a type of mushroom.
show more
11 hours ago
plants

Skandi's "Beachtree farm"
There's not much of any substance edible round here yet, my peas are 6 inches high, carrots have just grown their first true leaves and cabbages, well they would only make a very small snack for a single caterpillar right now, but the weeds are doing well so here was dinner, weed and leftover salad, with a few new potatoes out of the pollytunnel. 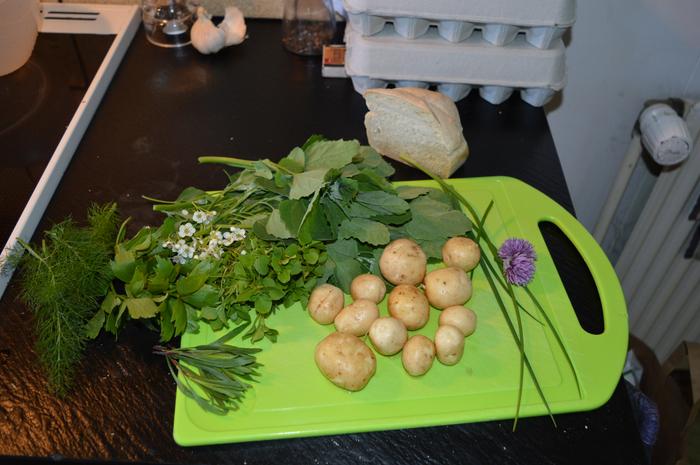 Plus a bit of chorizo which is not pictured, then I fried the chorizo in a dry pan, and then fried the bread in the fat that came out of the sausage, the potatoes were just plain boiled, to do anything else to such nice new potatoes is sacrilege, wait until they start getting old for fancy stuff. while they were cooking I made a balsamic/olive oil dressing, then while the bread and potatoes are still hot through it all together and serve. 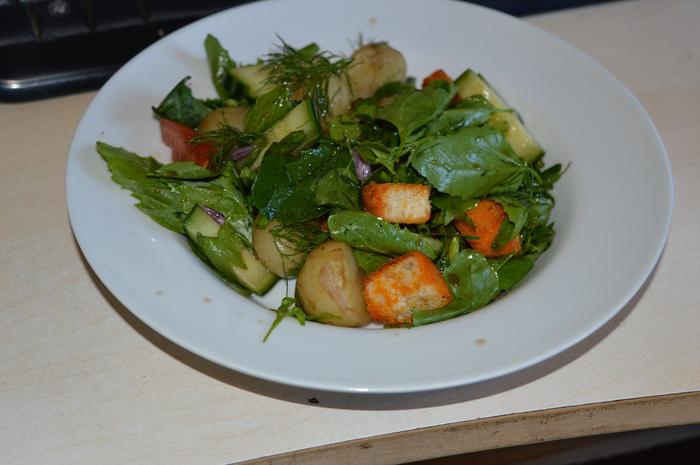 Skandi's "Beachtree farm"
We are trying to reclaim an old orchard right now, it has mixed fruit trees on 5m centers a ton of black and red current bushes, chives, strawberries, raspberries and one sick horseradish. We've added some more trees and some rhubarb. we cut down a what seemed like hundreds of self seeded plums (thorny with dry tasteless fruit) and cut a lot of branches off an old plum tree where they fall in the storms and then root where they fall. all in all we opened up the area a ton and made it much more passable, 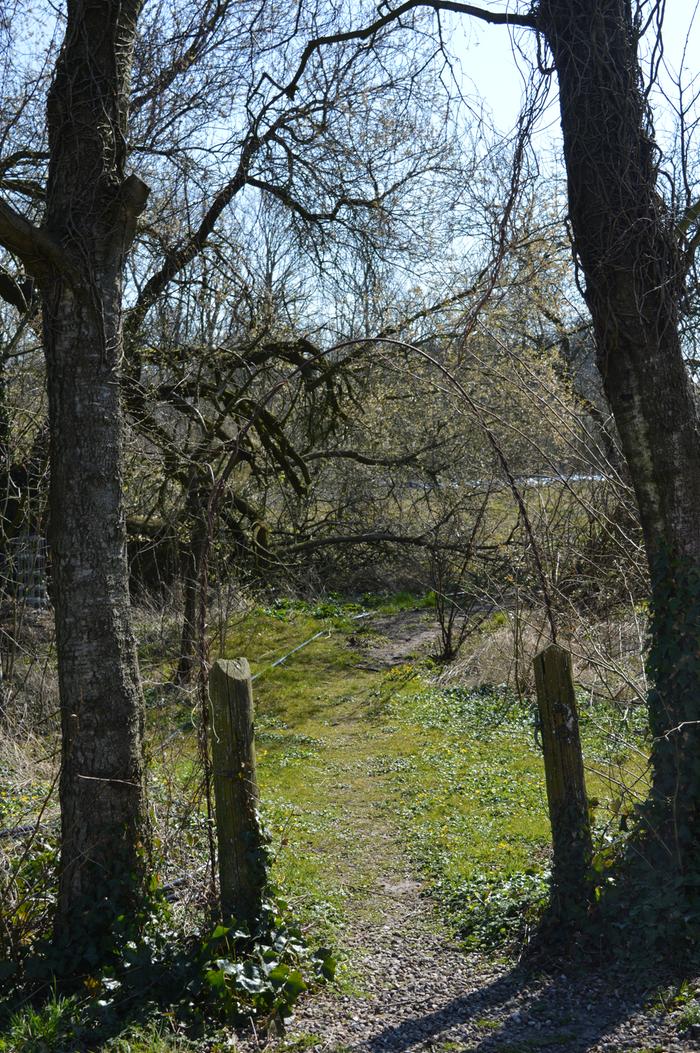 Before.. to the left of the picture there are three old wood and metal calf huts they have been there 30 years and also have to go. 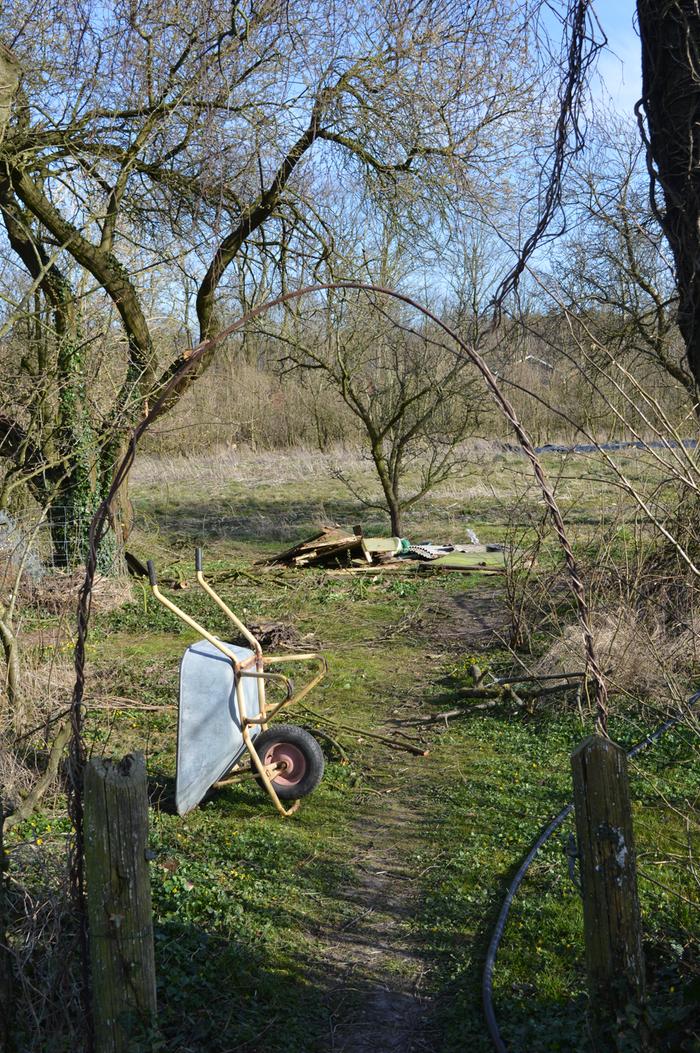 Oh look an apple tree! the tree dead center is quite a nice apple tree but it wasn't even possible to see it before! It had a massive crop of flowers this year so hoping for a equally good crop of apples.


But this means we have a problem, the ground cover was wood avons mainly with lesser celandine in the spring, nothing once the trees leafed out the shade was too deep. neither of which is an issue at all, there were a few patches of nettles but since we couldn't walk through the area they were not an issue.. but now they are! Nettles here grow to over 6ft and I hate being stung as it stings for a good 24hrs. so nettles next to paths just have to go, so lawn mower to the rescue. 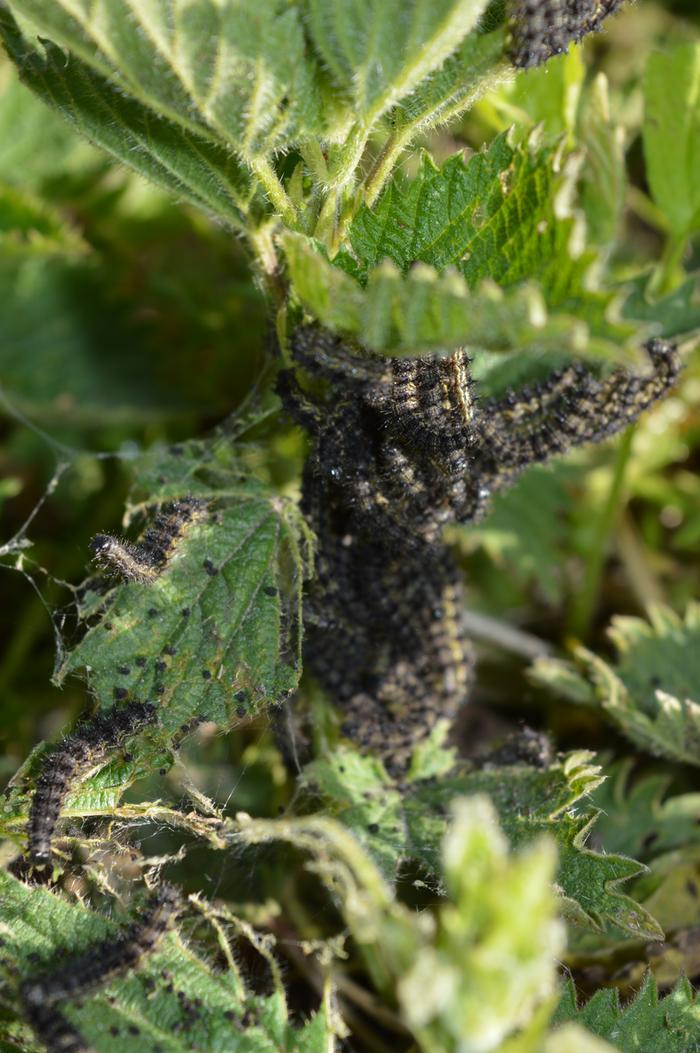 Hubby found these caterpillars on some he was about to mow, they are either peacock or small tortoise shell butterfly babies so I went to collect them into a pot to move to some safer nettles, well I discovered they have a defense mechanism, when you touch their plant they all curl up and fall off scrabbling around on the floor under some pretty dense nettles isn't much fun, but I found at least half of them and moved them to some high-rise accommodation nearby.

What can I plant to provide privacy AND function
Are you looking for evergreens? That makes it harder to get food off of them, but beach where the leaves cling all winter is pretty close and the young leaves in the spring are edible and taste nice. a very dense hedge of hawthorn or something similar will give some privacy all year round and provide leaves, flowers and berries.
show more
15 hours ago
plants
Is Honey Greed Killing Our Bees?
We only buy honey from two people one of them is my father in laws neighbours and the others are around one mile down the road from us, we see their bees on our flowers. Of course bees forage far and wide so they will pick up anything in the area, we are just outside the largest natural park in the country so a good proportion of the forage will be organic. according to the national beekeepers association the average yield from each colony in Denmark is 35kg (approx 70lb) and only 7% of their members are professional (90% of all danish bee keepers are members).
show more
18 hours ago
honey bees
Bear proof composting for a community of 20
Worm composting inside a building? or even standard composting inside a building (with ventilation)
show more
1 day ago
composting
Roadside stand and stray dogs
Cat's don't seem to care to much unless it's raining and then if your stand is nice and dry they may take up residence, we have lots of cats round here and they don't bother the stand as most cats are not keen on strangers. Maybe a little fence would work for the dogs? it's less offputting for customers to have to open a gate than a door.
show more
3 days ago
farm income 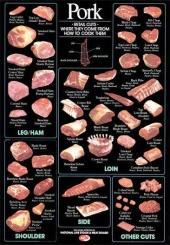 Butchering a pig
Interesting dried liver stuffed with some form of preserved egg yolks. I wouldn't have thought it would dry enough just with some smoke and no salt at the size it was
show more
4 days ago
pigs

Using Hawthorn Fruit/In Praise of Hawthorn
I find haws a very boring fruit, it's dry and pretty tasteless I add the fruit to my hedgerow jelly, which will be a mix of blackberry, elderberry, rosehips, hawthorn and anything else I come across in to small quantities to use on their own like plums, apples, rowen, cherry etc etc. However the leaves right now when they have first come out are a nice addition to salad and the flowers are also edible and medicinal working well in tea to reduce blood pressure. Of course the wood is very hard and a good wood for both burning and carving.
show more
4 days ago
fruit trees