Do you mulch between garden beds/hugels? With what?
I use chips, and this year sawdust which really works. Downside it absorbs nitrogen if you till it in, but we use it as path 1 year, then I will put protein on it in late fall and  till in the top 2 inches come spring. Getting it deep is a problem once it is away from oxygen and light/heat it wont compost as well.

show more
4 years ago
mulch
Help! My wood chips went everywhere!
Travis,
You need protien on that bare soil, it will really help the chips get started and get stickier and moister.. You can read about it, but it might take a while to string together the idea that the proteins are amino acids, and the amino acids are what the the soil biodome builds its bodies out of, and that nitrogen is inherent in proteins (÷6.25 for N) as well other nutrients such as sulfer and iron. Soybean meal (near 50% protein) would really kick you up a notch. But it can inhibit small seeds so fish fertilizer or other might be best to start if you are seeding lawn. 20lbs per 1000feet, 2x a year. Organic ferts like Jobes that have endo and ectomycorhizea are a plus but have to be itched in or they die in the sun.
show more
4 years ago
mulch
New Permaculture, Poor Soil Structure
Andrew,
Understanding the soil you have is important as their are 12 types. InTenn east of Jackson it is mostly ALFISOLS. and the climate suborder is UDALF. West it is Ultisols for the most part, a really different soil. On the map below it looks like  so9me relation to the river and history of moisture from the river basin that influenced and formed that soil. Reading about this leads to understanding the behavior of the soil in its relationship to weather moisture and temperature, and can help you for a basis program of supplying what the soil needs. It wont be that easy, but one day you might string all the details together into a deeper understanding of why your soil acts differently than others describe about their soil. Alfisols are pretty good relative to a lot of nutrients compared to my poor Ultisol here in Bama which needs dolomite lime to unlock it.

Here is a map for you. it is interactive. Touch your area.and a popup should show detail soil order and sub weather order. Then google about them and you might get lucky as far as learning how/what works with that soil, or ask Bryant Redhawk as I think I recall he is a trained soil student.

show more
4 years ago
mulch
Does quenching biochar matter?
I admire the design of the Kon-Tiki Cone Kiln. It is a large metal cone with 70 degree walls, it has a water pipe inlet with a valve attached to the bottom, and a drain pipe. It quenches from the bottom up, and the wonderfully filtered water can be reused by irrigating it back out to plants or other purpose. I see they are working on further development of  air control jackets for enhanced pyrolisis zone control on windy days as well as emissions control,  but the water piping is a noteable idea.
show more
4 years ago
biochar
Does quenching biochar matter?
Thanks Todd, I enjoy reading this type of paper. One detail that was alluded to as an X factor was in fact the water itself. I noticed that distilled water was used, as a "control" to eliminate contaminants in the water. What is kinda cool about water though, especially in its purest form, is that the electromagnetic energy in the very bonds of the water itself are strong enough to lift the water up into a bubble when it is on a clean surface, such as the waxed hood of a car. We have seen this many times.and the droplets can stand up and be suprisingly tall. What we do not register is that the characteristic of spreading out and attaching to surfaces we would actually consider to be wetness or wettability, and that means the opposite action would be an act of dryness, measurable in its electrical values among materials including water. So long story short, water is one of the drier substances on the planet relative to that capacity. Adding anything to the water, such as one might with a form of fertilizer, will help break this internal attraction and promote wetness.

Having said that, I also noticed the article seemed to connotate a direction without my particular purpose. Specifically that the char was problematic if it did not absorb water immediately and that the clogged pores were problematic. I do not see this as a problem, because the char has an extraordinary love of oxygen, the other mega nutrient with water. As it simply sits exposed, it will suck oxygen out of the air, and begin oxidation. This characteristic seems to be a concern to some who point out that it offsets the carbon sequestration effect. I view it as aeration for roots. As this oxidation occurs, the surfaces change, and water suddenly finds itself sitting on a surface much like old oxidized chalky paint like an old car would have, and there is no water drops standing up or resisting wetting that kind of surface as you know. From what I have read, older incorporated char becomes so oxidized that its porosity becomes that of modern activated charcoal over a period of years.

Secondarily, I tend to be in that camp which sees the organic residuals, described in the article as tars, as food for bugs. I think its a good thing over time to not open up the porosity to the exent possible in a manual fashion, rather letting nature do this work. Activatied carbon is highly porous, but this is arrived at through exceptionally high temps, or additional chemistry, and at a loss of volume of 2/3 of the char. Its just overkill that slows the adoption of the char into the biosphere.  I would soak the char in a myco enhanced liquid fertilizer compost or compost tea type mix, after I let it sit dry and aired out a while. 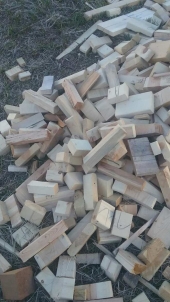 small explosion - a cautionary tale
I have seen steam do that.  How dry would you say the wood was? Also I see a lot of inverted inner barrels with no top so the gas would build but lift the inner chamber used in the 2 barrel design. And locking rings on the 55. Did you have a ring? It sounds loose. If it was syngas I could imagine that caused a bit of a mushroom cloud in the backyard. Steam not so much.
show more
4 years ago
biochar
Newspaper composting/ disposal.
Try a double barrel biochar retort. The paper can be rolled or stacked vertically. The resulting carbon will be a good thing, and more permanent than compost.
show more
4 years ago
recycling
Biochar in the suburbs
Does the crushing pressure of compressing briquets not collapse the very porous nature of the charcoal thus working against the very idea of surface area which in its part makes the value of char so high? I am sure the longevity is still there, but 1 gram of char can have the surface area of 2 tennis courts or more, and I would think that a visual microscopic inspection should provide a  observation that at least leads in a direction of an answer.
show more
4 years ago
biochar