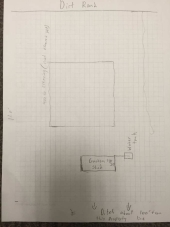 Bryant RedHawk wrote:video of low pressure, battery operated water valve  This might be of help.

Orbit makes a battery operated timer valve that needs lower pressure than 80 psi to operate, there is no mention of the lowest water pressure it will work at, but I imagine it would work for your situation.

The other choice would be to elevate the tank so the head pressure would be 10 psi. That means you need at least 10 feet of drop to the valve from the tank with a 1 inch line.

Hey man, your name is familiar...are you on the backyard aquaponics forum too?

Anyhow I jumped the gun making this thread without doing enough digging. I ended up finding a ball valve timer that will run on 0 PSI. The key search word was " no pressure rain barrel timer" The cheapest model I found was the toro and lowest price on that model was direct from the dealer in case anyone else is interested:
toro rain barrel timer


We've hit a dry spell and I am having to drive 2 hours round trip just to water! as a result I paid for the 2 day shipping lol. Wish me luck. HOpefully this solves it.

Need help with gravity fed remote watering
Oops! forgot to mention there is no electricity or solar set up and I would like to keep as low tech as possible.

I guess the first question would be; Do they make battery operated timers that run on little to no water pressure?
show more
3 years ago
forest garden

Need help with gravity fed remote watering
I'm having issues getting the timed battery operated valve to work with the low pressure. The box says it requires 10-100 psi to operate, which I'm guessing I have just under 10 PSI with about a 6' elevation change between my water reservoir and the lower ground which I am watering.

Here's an overhead view for reference. I'm running irrigation lines on a battery operated timer, to the 40X40 grow area, which is about 6' lower in elevation that my water reservoir. 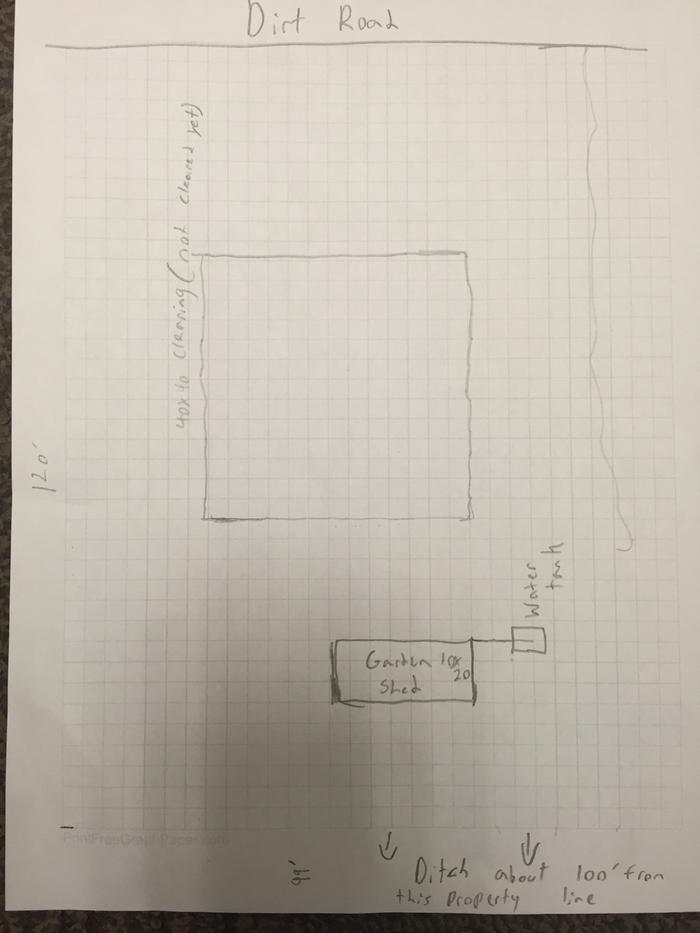 How I Built A Stand-Alone Rainwater Catchment System
Man your's is nice. I want to grow watermelons and need more water, so may build one just like it!

If you're real, REAL cheap like me, you build it out of pallets

I did buy some wood for the top, but a little curb shopping in suburbia could have also yielded some free lumber to use for the roof, I'm sure.
I converted the inside of mine to a shed to store gardening tools resources...but I'm really liking the greenhouse idea too. 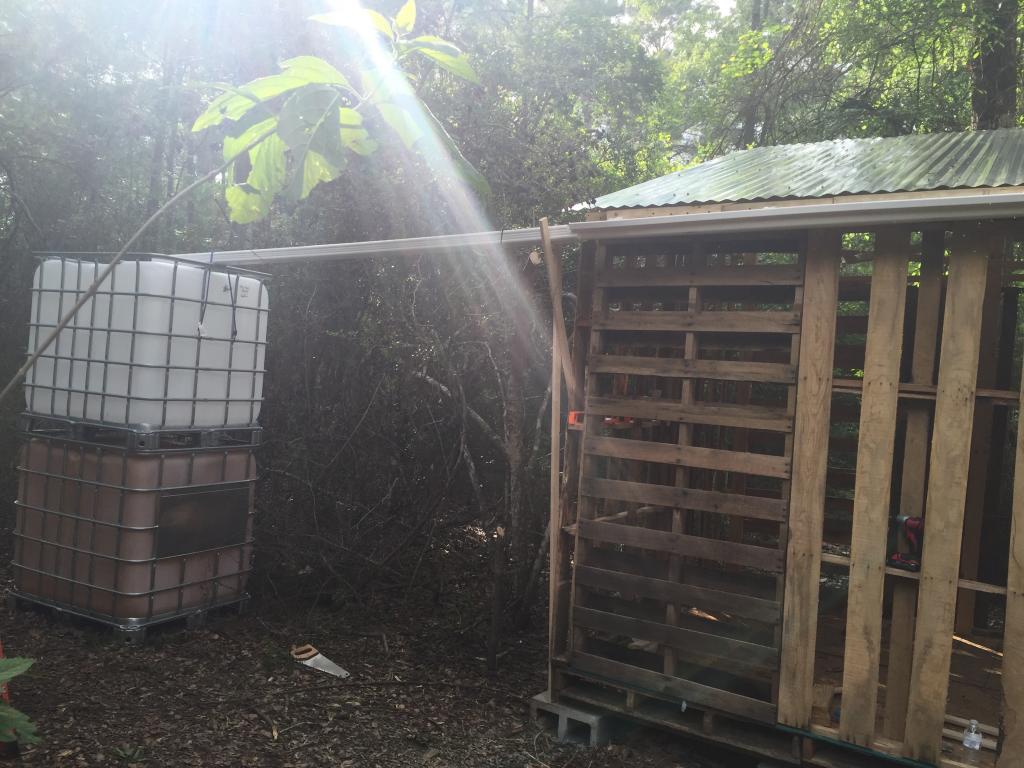 So, just purchased some rural property...
How's everyone been?

I've cleared a 20 X 40 area and have used the things I cleared to make a hugelkulter bed.
Now all I need is some decent soil/ compost. Problem is I have one of either lol.

The native soil is alkaline clay. I was thinking of mixing some peat moss with that and putting on a layer of that, then topping with some big box store bagged compost. Thoughts?
show more
3 years ago
forest garden

So, just purchased some rural property...

I like most of the suggestions, above.   I'm not sure why Marco suggested leaving taller stuff on the East.  He probably has good reason, but I differ in my thinking on that one.  In my mind the morning light is almost as important as the South light.  By the time west light is coming in, the plants are done with light for the day, have shut down photosynthesis. and are wanting it cooler.


I could see where maybe if you lived in a cool climate it might extend your season a little? I have the opposite problem so I am looking to keep things cool for as long as possible.


Roberto pokachinni wrote:In general, keep as many trees as possible.  The trees provide the basic foundation for the fungal network for the whole landscape which is the immune system and information system for the plant community.  The more you keep this intact, the stronger your system can be.   Haul additional trees/logs/debris to the property for hugulkultur.  Leave a sign by your gate for such things to be dropped off by neighbors who are clearing out stuff. Be specific on the sign that you don't want paint/chemicals/creosote on the woody stuff.

Great advice. Part of the my "keeping it cool" strategy is to avoid cutting too many down. I was thinking about maybe doing a bunch of small openings instead of one big open  area. What do you think?


Roberto pokachinni wrote:If you walk the road that is above your property on the slope, you should be able to see where the water enters your property.  Treat this (or these) as a intermittent creek(s).  Walk the 'creek(s)' into your property, mapping out, and considering the possibilities for water capture, be they swales, ponds, or divergent drainage ditches to swales or ponds.  You should be able to walk those erosion gullies back to the source inlets by the road.  Do that too.


It's actually fairly easy to see this after reading some of the advice you kind folks have given. The is a natural "drainage ditch" that has been formed on the side of the road. You can see where this shallow "ditch" gets overwhelmed and sheds water out of the ditch, down the slope and onto my land. It sort of sheds it out over the entire length of the ditch, which seems to form little gully's every 4-12'. Should I just put one big swale across the entire property every 20-30ft?


Roberto pokachinni wrote: If you have clay, you have good nutrient retention, so any organic matter is not easily lost once you have the erosion issues dealt with.  If your soil is full of loamy dead leaves then you are in really good shape.  You can add gypsum to clay which will loosen if further, but will also alkalize it.  With clay, ponds will be relatively easy to build.  I suggest many small ponds.


It's definitely clay dominated, definitely alkaline already and definitely full of dead leaves. The leaf layer is several inches thick in some areas. Normally our local soil is a gray/orange color on the surface, but when you clear the leaves it's actually dark brown/black on this property.
I think it generally just needs to be loosened and the PH neutralized. I'm assuming between the leaf cover, runoff and clay, that it's already got a fair amount of nutrients. I'm banking on being able to mix in a little compost, maybe some trace minerals and calling it a day. If I need additional fertilizer I've had really good luck with this stuff called microlife, which has fungal spores added.

Roberto pokachinni wrote:It looks like, in one of the pics you broke your shovel.  Crap.

That's been broken for a while, the duct tape just happened to give way lol...it's 1/3 shovels. That's what I get for buying a cheap tool.

Roberto pokachinni wrote:Next big storm, leave home and head out there, and play with chasing the water around, bring ribbons and a small saw or machete.  Cut a bunch of shortish sticks and place them in the ground as stakes and tie ribbons on them where you want to do work, when it's dry.  Build yourself an easy A frame level and go to work on the weekend with the grub hoe or mattock.


Man so many missed opportunities there...my 275 gallon rain catch is already full in less than two weeks and I've been using it too. Hopefully I'll be able to make it out there for the next good storm.
What's this a-frame level you speak of? I'll have to look it up.


Roberto pokachinni wrote:Save the manure/chips for when you are planting your trees.  Cover it, or build a composting humanure toilet over it.   Looks like you have plenty of leaves/duff, that you can compost if you get some good nitrogen stuff to mix with it.  Try to get a good load of fresh straight up manure and build a big hot compost.  You could do this on top of those chips to get them rocking.


Humanure...good idea since I have no septic! Obviously there's some legal issues with that on my 1/3 acre lol...I'll need to think of a creative way to disguise it.

Roberto pokachinni wrote:Any other chance of getting more chips, or quality organic material... don't pass it up.


Here in TX there seems to be NO shortage of wood chips/manure mixture. It is mainly pine shavings mixed in. People generally want money for the pure poop.
The stuff with wood chips mixed in is available in a seemingly unlimited supply as long as I arrange pick up...

So, just purchased some rural property...

Nick Kitchener wrote:If you decide to drop the elm or oaks, remember that you can inoculate the logs with mushroom spawn and stack them in a shady corner. They won't go to waste

Man you read my mind! I actually have a bit of experience growing mushrooms on straw with wild bird seed innoculation. Had the whole setup with the XXL pressure cooker, glove box(home made) and everything... I just put in an order for 1000 pearl oyster plugs. I already have some white oak limbs that are the perfect 3-4"L 4-8" diameter size that I cut down in late december of last year.(hopefully not too old. I was reading that they can be up to 6 months old)
Plenty of shade on the property so mushroom cultivation is something I think I could def. scale up on that land if I'm successful. Also no shortage of suitable trees to use.

So, just purchased some rural property...
I'm going to post up some more pics I took over the weekend. Since I am finished with the outer part of my "shed" and am now collecting water. I'm moving on to landscaping.

This tree looks as if it's been struck by lightning. It's starting to rot and is leaning ominously toward the shack I just built. Should have cut it down first I suppose lol

It's hard to see in the top two pics, but I'm showing you where water flow has created rifts and valleys. Notice the trees I've cut off are growing up on the rifts while nothing is growing in the valleys.
Since I don't have any heavy equipment, my plan is to build hugelkultur beds on top of the "rifts" so I can cover up the tree stumps(since I have no equipment to rip them out with) and then maky my walk ways in between the beds where the "valleys" are.
show more
3 years ago
forest garden

So, just purchased some rural property...
Just brought in some "compost"...

It's horse manure mixed with pine shavings. What are your thoughts on this? Looks like wood chips to me. Mix with some of the native clay and let it sit?
show more
3 years ago
forest garden