Soapstone RMH
I'm confused, because soapstone is often lauded as THE material to use for a masonry heater.  It is most certainly not safe to use in place of refractory masonry products in the core of heater, (RMH or masonry) but it's considered just about ideal for the mass/facade.  Many feel it has the best thermal properties of any natural stone, absorbing a great deal of heat and releasing it slowly to the surrounding space.  Soapstone is to masonry heaters as cob is to rocket mass heaters.
show more
2 years ago
rocket stoves
Full Length Drum Rocket Oven
Based on the way you phrased the question, I presume you are referring to a 55-gallon steel drum that is on its side?  If so, the quick answer to your question is "probably not", but it depends on the placement of the flue (exit) and whether or not gases are stratifying before they exit.

Can you provide some kind of drawing of what you propose?
show more
2 years ago
rocket stoves 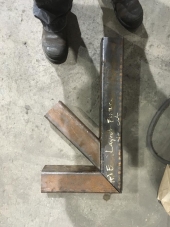 Rocket Stove Design
When you get a rocket stove "rocketing", the heat is enough for metal to start spalling.  Where do those tiny bits of metal have the potential of winding up?  In the food you were cooking.

The only way I would ever use metal for a rocket stove is if the heat was fed into a self-contained metal cook top, usually protected with firebrick of some kind.  The gases heat the cook top before circulating around and exiting through a flue.  Having made the mistakes with metal, I now know to stick to high-temp masonry products (firebrick or ceramic fiber/fiberboard) for the burn chamber and riser.  There's nothing more frustrating that building a rocket "stove", only to find out it won't get hot enough to cook the way you'd hoped.  The best way I've found (by doing a lot of things wrong) is to build a properly sealed and insulated masonry core...that's when things get HOT!

show more
2 years ago
wood burning stoves
A ducted RMH
The wood-burning fireplace insert in my home has a plenum chamber above it, with twin ducts that run vertically, through the mass of the original fireplace, and tie into the hot air return for my HVAC system.  The air intake for this plenum chamber is located in the brick facade, several inches above the doors of the insert.  When I've had a fire going for a sufficient period of time, depending on how cold it is, the heat in the plenum chamber creates enough of a draw to slowly draw in air and "force" it through the balance of the duct work of the HVAC system.  If I manually turn on the blower motor for the propane fueled heater, it takes about 8-10 minutes to normalize temperatures throughout the home.  During those times that I keep a good fire going, I use absolutely no propane or electricity, while keeping our house much warmer than we normally would.  It is nowhere near as clean or efficient as a rocket mass heater, but it feels great, just the same!

While that is not exactly what you are asking about, it's pretty close.  I think the problem with pulling air through the mass of any RHM, and using it to supplement the heat from a conventional forced air system, is that the inherent flaws of a forced air system will quickly cool the mass of the RMH.  I hope your experimentation proves me incorrect.
show more
2 years ago
rocket mass heaters
Pulsing BBR
An inefficient burn and off-center riser could have created a constriction in airflow between the top of the riser stack and the top of the barrel.

I have seen fly ash build up very quickly in this area (sometimes within just a few weeks) and your 3" gap is now down to 1.5", or less.
show more
2 years ago
rocket mass heaters
Novice questions: easy RMH for small portable yurt; access to the book?
The "M" in RMH stands for "mass".  Mass sufficient to the needs of heating a living space is inherently not portable.

Also, yurts are often built on some kind of raised platforms, at least the ones I've seen, and any such platform would need to be built sturdy enough to support the weight (mass) of an RMH.

As noted in one of the links, the Korean Ondol solution might be a good one for a yurt, where floor space is already quite limited.
show more
2 years ago
rocket mass heaters

dry stack brick rocket stove
I tried dry-stacking a variety of materials and was frustrated with the results.  In my ignorance, I blamed the materials, when the real crux of the problem was the number of air leaks in the systems I built.  Before I heeded the advice to create a sealed riser, at the very least, I had to use a small fan to force enough air into the burn chamber to generate the kind of heat I wanted to see.  After I sealed the riser and burn chamber properly, two of the three materials I had been playing with worked very well.  The third was a concrete paver and simply too porous to create enough heat, unless I was patient enough for that entire mass to get really warm, which took anywhere from 30 to 120 minutes, depending on conditions.

Once I built a proper, sealed unit, out of suitable materials, I had 500 degrees (F) or more within just a couple of minutes of starting the stove.  This was the difference between a rocket stove that I could barely simmer soup on to one that would get a cast iron pan hot enough to sear meat properly.  Also, the amount of smoke coming out of the riser decreased dramatically when I finally had it burning hot enough.  Those are my experiences with dry-stacking.
show more
2 years ago
rocket stoves 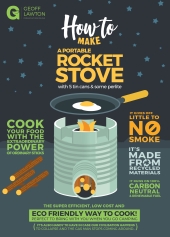 Build a Mini Rocketstove from Tin Cans..
First of all, you are to be commended on the excellent graphics and detailed instructions.  Even someone unfamiliar with DIY projects could follows your diagrams and written explanations to build the tin can rocket stove you describe.

My experience with a well-made rocket stove is that they simply get too hot to use metal for the core.  The heat and erosion from oxidation result in the metal being worn away, potentially winding up in your food.

I need to stop being lazy and make a video or quality diagrams, like yours, about how to make a rocket stove from firebrick splits.  It's nowhere near as inexpensive, but will last a lot longer and likely be safer, if that is a concern at all.
show more
2 years ago
rocket stoves

Dimensions for small metal rocket stove
I have made a rocket cook stove from metal, then from different masonry products, and finally from firebrick splits.  I can tell you that the metal ones work really well, until you realize that the spalling metal (tiny fragments being eroded away by heat and oxidation) has to go somewhere.
show more
2 years ago
rocket stoves

Is this an absurd idea?
Be encouraged that alternative methods of heating and cooking with wood as a fuel source are definitely possible.  Whether or not your design is safe or effective can be best determined by first building a "known good" design.  From this you would learn a great deal about the basic principles of "rocket" heating and cooking solutions, both of which are based on centuries-old masonry solutions from eastern and northern Europe.  Almost all of the ideas, good and bad, have already been tried.  The good news is the lessons have been learned and you can benefit from those.  Once you have learned what DOES work, you'll have a better understanding of why your idea may or may not work, and you'll know how to gauge the relative degree of success you achieve.
show more
2 years ago
rocket mass heaters