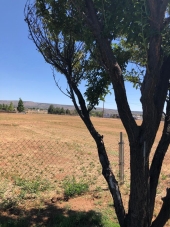 Are all of our trees sick?
Hi Bonnie,

Despite what many people say, the standard in Arboriculture is never prune more then 25%. Many orchardists were taught different, but as imperical testing proves otherwise, many orchardists are slowly adapting. Those experienced Arborist quickly learn less is better in prunings, as it doesn't shock the trees chemistry. Shocking the trees chemistry can increase water sprouts, and the need for corrective maintenance in structure many years down the road. If you can get by with 10% prunnings, until you restore your trees, maybe over a 3 year period. I would recomend that, to decrease the need for maintenance after restoration. The less you need to prune after restoration in maintenence, the healthier and more productive the tree will be in bearing fruit. Every family and species of tree is different, and can respond very different to prunings: some better then others.

It looks like you have sun scald on some of your truncks or scaffolding branches, though its hard to see in the pictures the extent of this, or see if its related to what may be a bacterial infection causing the ooze. You will need to properly edge those open wounds on the trunks and scaffolding, if they are not actively showing any growth to compartmentalize. The ooze may be a bacterial canker that's common in many stone fruits. Boosting the health of the tree, and it's immunity will help drastically. Get your soil healthy, proper water, and the trees will suprise you. I would recomend a well balenced properly made, multi imput aerated compost tea, foiler feed and root drenched, to give immediate help, while you establish that BTE mulching system. If you want I'll share my compost tea recipe, which in unhealthy plants can do amazing things to help restore health.

For the coddling moth, the larve I suspect is whats leaving its frass on your apples, or those orangish blobs. I'm not sure if BT has an effect on coddling moth larve, but if it does, treating now will be fine to break the reproduction cycle, which those larve from now, will likely be attacking your trees next year. The BT bacteria will persist like a contaminated bio hazard zone for a given length of time, to those pest which are susceptible to it. There are other strains of paracitizing bacteria used in agriculture that may work, if BT doesn't host on coddling moth larve.  The treatments won't save this years fruit, but will infect the larve from this year while they try to reach pupation. Eliminating them will drastically help reduce next years moth population, as sometimes many reproductive cycles of pests happen in a given season. If bacteria doesn't work on them, there are things that will. Though the coddling moth most likely pupates like other moths, maybe rolled up in a leaf, in dense foliage. When you get your soil and irrigation fugured out, it will be worth the effort to introduce a variety of paracitizing nematodes to your soil. They will stop the pupation of larve, that after exiting the fruit, pupate in the ground, like the apple magot, which in most areas is a problem too. The paracitizing nematodes are specifically selected, and harmless to anything but their spacific host range.  So they only host most ground pests, including destructive root nematodes. You may also look into hormone traps for the mature coddling moths, and a bug zapper on at night, during the beginning of the adult coddling moth season, where the first moths of the season are flying about. If it gets to the worst case scenario, you can see if suround clay is an option you want to consider, especially if you run into other problems, like with cuculio weaves on your stone fruits; however, that weavel is a whole other subject....lol.

I hope that helps!

show more
2 years ago
trees
Is it still considered a tithe if you control it?
Hi Elle,

If the Church isn't doing their duty, taking care of the closest needy, or the sheep of that flock, before helping others abroad; then what you give to those needy close by, and what you give as special gifts, counts as service to the Most High: of course keeping in mind, not to do these things to receive praise from other people, but rather to Glorify the goodness of the Most High.

This lack of wisdom in stewardship, is a big problem in todays churches, as the blind often leads the blind. In many cases wisdom in stewardship is completely lost, and those who should be good stewards of their flocks, have in some ways, become like the hording cat lady: who without taking proper care of the cats she has; then goes out to gather more cats, where in neglect, they all together perish faster. You must first take care of what you have, before expending resources to gather more. The great commission wasn't just about spreading the word of redemption, it was also about spreading the wisdom of all scripture, teaching about taking care of each other in love, and being good stewards of the flock. People forget the church isn't a building, it's the people of the congregation.

There is a reason in scriptures, those who went out abroad in the great commission, or missionary work, were commanded to take nothing with them: as that would show little faith in who they serve, while also taking away from the local flock. Also in scriptures, those who when out on the great commission, where mature enough in there faith, to teach wisdom and faith: by knowing the Most High who they serve, can bring water from the rock, mana from the Heavens, coins from a fishes mouth, oil and flour from empty jars, also multiplying fishes and loves. We again need this kind of faith, the faith of a mustered seed. Everyone in these times puts their faith and understanding in man, not understanding what it means to put faith in the Most High. Ironically we're on a permaculture site, and for those who have faith know, permaculture teaches the Most High knows better then man, as we learn to go back to the systems in nature He created, many for agriculture even written in scriptures, for those who have knowledge in the word. Thats why people are also eating Ezekiel bread again, because it's very healthy.

It was always meant to take proper care of the flocks as first priority, an unspoken common sence, while scriptures gives many clear examples of this. A good shepherd has strong healthy flocks. A good shepherd leaves his flock on good pasture, whith adequate shelter, water and protection from preditors: before he leaves the 99 sheep, to find the one sheep thats lost. Sadly this wisdom has been lost, and good stewardship is no longer understood amongst the leadership in these times. It's become more about gathering sheep to sheer their wool, to make more money, to gather more sheep, to also sheer their wool, excetra. All the while, those sheep are left scattered and neglected, perishing in preditor infested over grazed pasture, only gatherd for the shearing.

Now remember regardless what men teach, tithe as it was written, is 10% of your best first fruits, in due season, as outlined in scriptures: anything else is considered a special gift, in service to the Most High. Your described intentions could also be considered loving your neighbor, unless your going beyond your neighbors, and doing what the church stewardship has neglected, in taking care of the body. You can direct your special gifts to the purpose of your choosing, and if the leadership isn't being good stewards as it was written: your service in undertaking that responsibility of stewardship, will also be as a special gift in service to the Glory of the Most High.

So much wisdom has been lost, because most people don't know whats in their Bible; however, if you write it all on your heart, searching out that wisdom like your greatest treasure: knowing the Messiah is also the Word which always was spoken; then wisdom starts to reveal itself, when people rely not on their own understanding, and look to understanding as it was written, even in the hard sayings which perplex mankinds own understanding.

If some of that seems discouraging, let me share the good news: everything will be restored, the path will again be made straight, every vally lifted up, and it was all written.

Blessings to you, I hope that helps!
show more
2 years ago
religion and spirituality
stinging nettle for pain relief
Hi Ben,

There could be more to it, regarding the compunds introduced in the subcutaneous tissues by the nettle, but most likely it's the endorphins produced by the body, in reaction to the compunds effects on the body. Pain is relative to perception, so it's also relative to ones endocrine chemistry, which can alter pain perception. Different endorphins released or activated, from the endocrine system, can alter ones perception of pain. The questions are: is it the compounds in the nettle themselves, causing reduction in pain or inflammation, or is it inducing a response from the bodies endocrine system, to release anti-flamitory: and or pain relieving compounds? The imperical answer, I personally can't speak on.

I hope that helps.
show more
2 years ago
medicinal herbs 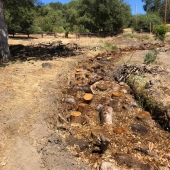 I agree with Bryant  Redhawk about Domestic Cats being a great solution and a fierce preditor: if you get one that has good prey drive. Every cat is a little different, so adopting an older cat with already proven prey drive, might be a more accessible solution to your rodent situation. Every cat is different, but from my observations, the dark brindle color are more successful hunters. That color pattern may offer better camouflage, at least in low light loodland areas.  I've also heard certian breeds are more into hunting, like the Manx breed, though I can't state that from my own observations. Adopting a feral cat, that has strong prey drive could be a good solution. It gives a cat a home, and encourages the rodents to seek, less hostile pasture. The cat doesn't even have to be successful at catching them, if the cat has the drive to keep trying. That constant pressure alone will eventually encourage the rodents to move on.