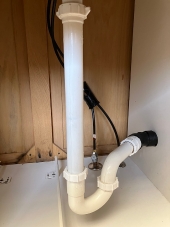 I think you're looking at this one: https://permies.com/wiki/112757/pep-plumbing-hot-water/Repair-Trap-PEP-BB-plumbing

I concur with Christopher.  This sounds like the repair the P-Trap one.
show more
1 day ago
skills to inherit property

I was looking at the shovel snow bb.
Normally here i compact the snow to walk on it, it does not seem energy effective to shovel it just for myself. But next time it fall, could i only plow the fresh one on my compact trail? or does ithe shoveling need to go straight to the ground ? And most of the video  seems to be on hard surface, asphalt, ciment etc. Are this a requirement ? could it be a trail to go somewhere directly on the lawn ?

I had this question myself when I first looked at that BB.  Going through the other submissions I saw that others had shoveled "walks" that were not paved and got approved.  I certainly agree with this since to my mind if an unpaved walkway will work it seems much more permie to keep it that way rather than to use the energy and resources to pave it.

I just submitted my shoveling of just what you are asking about, trails/paths going directly across my yard to out buildings and it was approved.  I also did not shovel all the way down to bare ground.  In my experience it actually works better in these situations to get a packed layer first and then shovel off that.  The packed layer starts acting like paving with regards to ease of shoveling!  If you have a packed snow layer though and your are shoveling off just new fallen snow for the BB I feel like it would a good idea to make it easy on those certifying to make sure it's clear you are shoveling a layer that is obvious without a doubt in excess of the required inch.  Images of a mere inch of white on white could be hard to determine!
show more
1 day ago
skills to inherit property

Shovel Snow From a Walk - PEP BB nest.straw.shovelsnow
I did this one a while back then realized I forgot to shoot the "before" shots!  Well, snow is a recurring theme in my neck of the woods so before too long I had the opportunity to document this again.

I have many outbuildings I travel to regularly and thus shovel paths to walk out on.  I also will generally park my car out closer to the road when snow season starts so I have very little wide driveway to shovel.  Instead I just have to do a narrow foot path.  Works great!  I don't have measurements of how many feet of walkway I shovel but my home is a 55 foot trailer.  Based on that I would say what I'm submitting is at least 200 feet or more.  I did this after a decent storm that laid down about 6 inches.

I submit this for BB consideration.
show more
2 days ago
pep nest

Electricity Badge Oddball thread
I initially thought this might go for the troubleshoot and fix and electrical appliance BB.  While I did need to troubleshoot the issue with my off-grid photovoltaic system in the end I'm not really fixing an electrical appliance.  Instead I am replacing it, and sending the old faulty one back to the manufacture for repair.  It will become a back up unit for me should future issues arise.  So that makes the electricity oddball category seem like the best spot to me.  Please let me know if there is a better spot.

So anyway, my solar system happens to have two separate solar arrays for reasons that annoy me which I won't get into.  As it turns out this provided resilience that saved my bacon, or at least kept me from going without power.  The two different arrays each have their own charge controller.  One morning while clearing snow off the panels I saw that one of the arrays wasn't generating any power while the other was putting out several hundred watts.  They are never the exact same, but no power and hundreds of watts was a clear indication of an issue needing attention!  I worried that perhaps a panel had gone bad.  Then I noticed the charge controller for the bad array was registering voltage, just no amps or watts.  Investigating further it seems the voltage it showed was consistent with the open circuit voltage (VOC) for the panels in that array.  This told me the panels themselves were fine there was just no load on them when there should be.  That strongly suggested the charge controller for that array being the issue since everything else in the system was functioning.  Thankfully I did have the second array to power everything.  Thankfully too the sun finally began making more regular appearances just at that time.  Only a week before and the one array would not have been sufficient.

The trouble shooting guide for the charge controller did list my issue and recommended if I had it to call the manufacturer.  I peeked in at the internal guts of the unit but didn't see any obvious thing I could identify as bad and fixable by me with my skill set.  Knowing the manufacturer would not be quick even if they were right on top of things I decided to order a new replacement so I could get my system fully functional before the weather changed and became cloudy again.  (Quite possible this time of year where I am!)

I thought this would be a simple swap out.  Ha!  So I have now learned there are locking nuts for conduit pipe fittings.  They work really really really good at locking in place and never backing out!  It would just dig into the softish aluminum of the case and not turn any more.  In the end, after a bit of swearing and stopping to take deep relaxing breaths, I found I had to break the nut to remove it.  Due to it's tight location this was best done with a drill.  (I swear it acted like hardened steel too when trying to drill!)  Eventually I got through it, breaking it open, then bending and twisting it enough to remove.  After that it was a fairly straightforward job.

I made sure to take reference photos of where all the wires were and how the various jumper setting were set.  That allowed me to easily hook up the new unit as the old one was.  Once powered up I did also need to go in and program all the various settings to match what they were and get it linked in its "follow me" mode with the second charge controller.

All is happy again in my homestead photovoltaic land.  The defective unit will be shipping out tomorrow for eventual repair.  Then it will be stored away to be on hand and ready the next time a unit fails.

All told I spent over 3.5 hours on this job, which is a silly amount of time.  Part of that was the need to run to the hardware store for a new locking nut since I had to destroy the old one to remove it.  I don't know if a professional would have an easy way to remove it.  I think they still would have had to break it somehow to get it off, but they would have known that rather quickly.  My guess is that a pro could have been done in 30 to 45 minutes.

Vanessa Smoak wrote:
As far as “boa” I think that is what they’re called. I’m referring to 2 stones tethered together with leather or sinew and thrown to tangle the legs of the target.


I believe what you are thinking about here is a bola.

That does seem like a potential traditional skills sort of thing.
show more
6 days ago
ancestral skills

Weave a basket - PEP BB textile.sand.basket
I've never woven a basket before, esp. using just locally harvested materials.  I've shown my artwork in some major high end exhibitions next to some of the current living masters of basket weaving and thought that would be a pretty cool thing to explore someday.  However, having seen such masterful work leaves me a bit sheepish even posting mine here!  I will anyway, because one has to start somewhere and my goal with this basket wasn't to produce a work of art.  Rather it was about beginning my education in actually doing this.  That's what I like about the SKIP program, it's a collection of projects with curated videos to help us learn real skills, and some fun motivation to just give things a try.

So I learned a lot about the very basics of weaving a basket.  I began with a bunch of perennial arugula that has gone to seed and in the process of dying back for the season out in my greenhouse.  I'm not certain how well it will hold up when dried out.  It usually seem rather tough when I'm trying to clean out the beds each year.  It does provide lots of long, reasonably flexible lengths of material.  I wasn't terribly happy with the whole project during the early stages, almost deciding to just scrap this and do something else with my afternoon, but I stuck with it.  As the sides came up I got much more into this, liking the feel of it and inner space being created.  Having worked with the irregular arugula and knowing how much of a control freak I am when it comes to fine craft I can tell if I want to pursue this more I will need to find a material where I can get more consistency of thickness and flexibility.  Hopefully the bamboo I planted years ago will finely settle in and take off.  I noticed last week that at least one patch I had all but given up on looks like it might be doing just that!

Anyway, here is my first basket, created from woven arugula for consideration for this BB.
show more
1 week ago
pep textiles 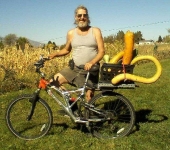 Show Us What You Are Hauling On Your Bike
Awesome Steve!  That's a serious load!

As a side note Nicole posted this trick to embed YouTube shorts here on Permies.  I'll embed your short here so everyone can see you hauling a rocket stove oven on a bike more easily!