ideal depth for raised beds
We have short beds and tall beds and I have a few rhizomenous (I don't think that's an actual word) weeds that regularly work themselves up through 3' of dirt. The short 12" beds do better against those weeds because they have raspberries in them and they outcompete the weeds.

My dad has 4' tall beds and he doesn't have any weeds coming up into his beds.
show more
4 hours ago
gardening for beginners 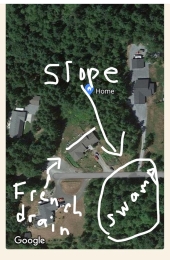 Seep or spring?
Here are some more images. Our gravel road slopes down quite a bit to the east and then the main road slopes down to the south. There are pipes in several places that go under the road from the north to the south so water can flow to the other part of the wetland.

You can see on the topo map that we are almost the highest point. We are on a ridge that drops quite steeply to the north and gradually to the south. And that is true for the wider area. We aren't a high point sounded by higher points. We are one of the highest points for many, many miles.

Which is all frustrating because I looked at these maps before we bought the house. I saw that there was wetland to the south and east of us but none noted on our actual property, just "wetland buffer" at the lowest part of our property. Which is very much lower than the house. You can't even see it from the house because it's this steep little hill and it's a good ways away from the house. So we knew that small part of the property would be wet. We never imagined the majority of it would be soggy!

Our neighbors to the east built their house a few years ago. We thought nobody would ever buy the land because of all the hoops they would have to jump through to build there. Their driveway is the only place they were allowed to put it. It follows the property line. They have to always have a certain number of trees and can't do anything but mow the grass and cut down invasive blackberries.
show more
2 days ago
wells and springs

Seep or spring?
Thanks you guys for all the good advice and questions. I'll try to remember them all to answer them...

Yes, the "lake" is lower than the floor of the crawlspace. We can't put a ditch there because our power lines are underground along the road. We do plan to go into our yard and dig down to make a marshy garden and get stuff to drain into the ground there, instead of the road. We were calling it a rain garden but technically it will be a marsh I guess. The road does have a ditch or slope along the south edge. But there is a little stream down the north edge during the winter.

Good idea to ask the neighbors about their crawlspaces. It never came up but we've talked plenty about how our yards turn into lakes in the winter.

Yes, there never should have been any houses built here. We found out the whole saga after we moved in. The developer didn't do any of the appropriate permitting or ecological site studies. When he got caught, the road had already been built, right through a wetland. A wetland where the developer had cut down at least one old growth tree. With evidence of the nest of an endangered animal in that old growth tree. 🤦 We can't undo all that damage but we do our best. The acre of  manicured grass and landscaping plastic that was here when we moved in is gradually turning into a food forest (for us and the wildlife).

I'll have to see if I can find a contour map.
show more
2 days ago
wells and springs

Seep or spring?
We would like to try and dig a little stream along the line I've drawn. It's a bit difficult on the east side of the house because the forest is pretty close to the house and it is comparitively very steep, sloping at that point from the forest to the house. The previous owners put a deep ugly ditch there that fed into a drainage pipe that we didn't know existed until I drove a tpost into it. Oops! That whole setup had gotten overgrown so doing something along that line hopefully will redirect a lot of surface water.
show more
3 days ago
wells and springs

Seep or spring?
Oh and there's a low spot on the gravel road, on the north side of the road, south of the fence, in that turnaround at the end of the road... During the winter it becomes an enormous puddle that all the neighborhood children call "the lake". They float boats in it, and splash around almost to their knees and catch tadpoles and frogs in it until it dries up in June. It's a ton of fun for them.
show more
3 days ago
wells and springs

Seep or spring?
Here's a view of our land (the house in the middle with the woods behind). It slopes down to the southeast. The front yards slopes very gradually that you barely notice it but there is a slope down to the road.

The southeastern corner of our land is a pond in the winter and that whole forest across the street to the south is inches deep in water all winter and spring.

The French drain goes across the whole back of the house. The crawlspace is leveled but we have dug trenches to drain the water to a few pits to drain it more easily with sump pumps. When I say the crawlspace is full of water, I mean it gets completely full of water inches deep over the whole surface, not just some puddles here and there. When the sump pumps are running, it mostly dries out but they regularly burn out which of course gets expensive.
show more
3 days ago
wells and springs
Types of Writing at Permies
I like seeing what people are doing on their land and in their gardens, with pictures, especially if they update over time.

And I like reading people encouraging each other and being helpful.
show more
4 days ago
writing

Seep or spring?
(First off I should say, it's never a good idea to buy a house in August in a drought year! 😂 "Honey what do you think they needed all those sump pumps under the house for?" 🤷🤦)

Our crawlspace almost always has water in it, year round, and we live in a location that regularly hasnear  zero rainfall during the months of July and August. We have a seasonal pond that is dry by June. All the yards of our neighbors downhill of us become marshy ponds during the wet months of the year. We are almost the highest point of a hill with a couple of acres of woods behind us that slopes upwards and there is no sign of surface water in that area uphill of us. We installed a French drain along the whole back of the house and the water still collects in the crawlspace.

My husband calls it a seep or a spring. I'm wondering if it really can be called a seep though if there doesn't seem to be any water that could be "seeping". Maybe it's seeping from an underground spring up the hill a little ways? Maybe it's an actual spring under the house?

If there is a spring, how might we locate the source? (Please don't start debating dowsing, but for those who think it works, if we did dowse, would we find the source when there is so much water right under the ground everywhere?)

Right now the water is pumped to a pipe that goes to a little drainage pond. It only fills up during the winter rains. It's dry enough that the water completely drains away in the summer. It seems kind of a waste but the water also seems pretty gross- it's pretty muddy and there are rodent issues so i don't feel safe using the water for anything. I don't know if my concerns are unfounded though. Maybe there is a safe way to use the water, instead of just draining it away from the house.

I think I have started rambling... My main question is if anyone has any guesses if it is a seep or a spring and how can we figure out for sure?
show more
4 days ago
wells and springs

How cool is the tropical blue butterfly pea.
I agree that they are beautiful and I really want to grow some to play with as a tea and natural food dye. I haven't had any success so far. 😢 I bought seeds from Baker's Creek last year and I scarified then and soaked them and they never germinated. I always save a few seeds just in case, so I have three seeds left to try again. I'm trying to find better info about how to geminate them. Those seeds were expensive!
show more
4 days ago
meaningless drivel 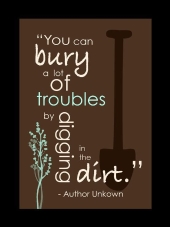