Hello from Germany near Cologne (8b)
Welcome to Permies, Helio!

Take your time to browse through the different forums here, you will find a wealth of information and many like-minded people.
You can search for region, or situation (urban, suburban), vegetables and so on...

If you want you can share a photo of your current garden.
show more
5 days ago
introductions

Philip Heinemeyer wrote:a friend of mine and myself grafted about 20 varieties of sorbus domestica that came from a conservation orchard in bavaria.

thats interesting, do you have the adress/website/phone number of that orchard?


The original orchard was probably that of the Bavarian Agricultural Institute in Veitshöchheim (near Würzburg). But nowadays it seems there are more nurseries selling the sorbus domestica.
Here are several sellers that go from around 2 USD for a year old sapling (see picture)


When googling a bit a found a very interesting book on the history of the Speierling in different European countries and the best ways to cultivate the seeds. It is in German, but has very interesting pictures as well (by looking at them I learned that some trees obviously have a tendency to grow a left-turning trunk). The PDF is online for free:
https://www.sdw.de/cms/upload/Projekte/FK-Speierling/Speierling_Buch.pdf
show more
1 week ago
trees

The simple pleasures of the day (please add your own)
This morning I went walking with a friend (in previous times we were usually 4 or 5 women, but now we have to take turns).
When walking over the fields, we spotted two European hares (like the ones depicted by Albrecht Dürer.

It was a beautiful sunny day, like the day before and like tomorrow, and I was able to get work done in the garden. I have ordered a bush (euonymus) that is very popular with the local birds, especially robin, and I made room by gifting a rose bush that is not really native and that was a bit forlorn in that place.
I made another person happy and in the course of removing the rose bush I was able to remove some weeds and replant some daffodils that were suffocating under some tiles.
show more
1 week ago
meaningless drivel

Suggestions for a tiny lot?

Dorothy Pohorelow wrote:I live in a house almost smack dab in the middle of town.  The whole lot is only about a tenth of an acre.  The house sits right about the middle of the lot.


My own lot is only slightly bigger (typo in my original post) than yours.
I grow a lot of veggies, berries, fruits, and our latest addition are two small grafted apple trees.

I found them via our local ads. For me it was local-ish as the gentleman lives half an hour from here. He has a wonderful small garden and is a passionate tree grafter. He has some pillar trees and espaliered apple trees for sale that are on a weak rootstock and will keep small. You can even keep them in a pot. The two little trees we bought had two varieties of apples each, so for little money we got four varieties of trees to try out!
This year I may start to look into grafting myself.

Espaliered trees can be used instead of a hedge on the borders of the garden and you can underplant them with bulbs for spring bloom and other flowers throughout the year.
show more
1 week ago
gardening for beginners
Eggs, to wash or not to wash, that is my question.

Interesting note: They sell eggs at room temperature in Germany. Maybe all Europe? But we lived in Germany from 2003-2006, and the grocery store eggs were found at room temp right on the shelves with canned goods, flour, whatever.


That's still the case in Germany. Eggs are unwashed and sold at room temperature.

I only ever wash eggs from my own chickens if they are very dirty.

I usually keep the eggs in the refrigerator anyway because I found the nice little stand I had received from a neighbour clutters up my kitchen too much so I didn't use it.
show more
2 weeks ago
chickens 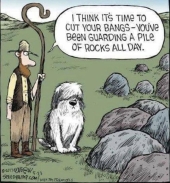 jokes
A woman goes to see the physician. „Doctor , my husband thinks he is a chicken. What am I supposed to do about it?“.
„Ooh, that sounds serious. Your husband should be hospitalized at once.“
„Too bad! You see, I am really dependent on the eggs“ 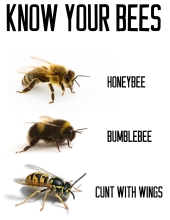 identifying bees vs. yellowjackets
I don't know your location, but here in Europe a lot of the wild bees (solitary bees) are ground nesting. They are very grateful for some open soil (without mulch). A bee hotel is only for some species and more for the joy of humans (that want to observe) than to help the solitary bees. A diverse garden with lots of plant material is superior to a bee hotel.
Looks like you also got a superb hotel for those little bees! They are probably mating.
show more
2 weeks ago
bugs

Suggestions for a tiny lot?
Espaliered trees are great! I have three apples and one pear in my tiny garden.

Do get some inspiration, look around what others are doing.
Have you seen this Chicago gardener with her edible frontyard? Very inspirational. 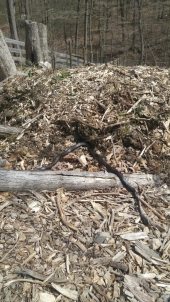 echo minarosa wrote:Domestic cats a.k.a. house cats are fantastic animals...in the house. Introduced in ridiculous numbers outside, they are deadly killers creating staggering numbers of dead native wildlife. I don't blame the cats...in part. They didn't ask to be in their position. Humans engineered it. I love love love cats as animals.


Same here!
I love cats, they got me through my teenage years and since then I always wanted to have a cat around me.
Our family cat died last summer which was a sad event but I also knew that this was the last cat I would have - for several reasons, but one of the most important ones was to save the wildlife from my cat.
Here in Germany there are no feral cats but far too many pet cats. There are scientific investigations on how many birds and amphibes a free-ranging cats kills each year.
This year we have installed birdhouses and feeders and it is such a pleasure to see the little birds starting to collect straws and moss for their nests! This is definitely different from last year (although our cat was frail last year already).

The two local lizard species are endangered and near human settlements it is almost impossible to have sound lizard populations. Cats chase them and even if they do not kill them, they make them shed their tail (they can only do this once) and with that they lose their fat reservoir and will perish in the winter. A friend of mine tried to make a lizard habitat in her (small) garden but she met with exactly this problem. So we are planning a communal lizard habitat a bit off the housing area near the railroad tracks and hope to have better luck there.
I have seen very few snakes in my lifetime, you really have to live in a more remote corner of the country to find some.

Similar with amphibes, especially some of the toads and tree frogs which have to face a huge variety of reasons for their extinction, but one reason is the number of roaming cats. I have witnessed a cat in the neighbourhood killing a frog some time ago. Last year we had two frogs in our tiny pond (which was built three years ago) and I was soo happy until one day one of the frogs floating in the pond with both his lower feet bitten off.

And one of the reasons why I don't let the chickens free range in my  small garden is (apart from scratching and eating my veggies) that they will eat anything they find, also beneficial insects, larvae and small amphibes like newts.

If you live in a wide space with lots of nature that might differ. But in my situation, living in a densely populated country, I have decided to do as much as I can to protect the little wildlife we have left and not endanger it any further.

City ordinances holding me back.
I thought that Germany was heavy on bureaucracy, but this sounds a lot worse. At least we can plant as much edibles as we like, we can have ugly or nice gardens, have beehives, chickens and roosters (up to a certain number), rain water catchments, cloth lines etc. (all these are traditional and no one would think that these things deteriorate a neighbourhood's value).

I don't know your circumstances, but another suggestion is to be part of the change; depending on the amount of available time and energy you have.
I am member of  the local chapter of the most renowned environmenal organization in Bavaria. Our head is regular member of the environmental council of our town. Last time I and another member also took part in the session as our head wants to delegate some of his tasks to us due to overload. This was very interesting, although we only had guest status. Topis are e.g. the town's biotops (more than 100), planned cycling lanes, tree plantings, sustainable garden incentives, at the moment we are planning a lizard habitat, and similar things.
That means we have a say in how the town supports environmental and sustainable practices, including gardening practices.

We also get to public bimonthly articles in the town's gazette (for next issue I wrote an article on plants that favour the goldfinch - with pictures - and some lines on the ongoing amphibe rescue action). The gazette is distributed to all ca. 4,000 citizens for free.

Add to that that the neighbouring towns are competing which is most sustainable, they plant meadows for insect habitat, hand out free birdhouses, introduce fairtrade regulations and similar.
So our situation might be easier.

But as I said, just a suggestion if you could search out like-minded people so that you don't have to fight on your own.
I wish you best of luck!
show more
3 weeks ago
new england