Catie George wrote:I will be curious to hear how you like it and how it bakes.

My parents replaced an heirloom 1920s cookstove with a modern one when the 1920s one was unable to be repaired. The modern cookstove put out more heat, seemed to burn cleaner, and had a much larger/longer lasting firebox, but was no where near as good for baking. Things needed to be rotated multiple times as the heating was uneven, and we could never keep it low enough temperatures for more delicate baking. Even the warming oven above the stove had to be left with the door open, or meringues, apple slices, etc would burn. But it didn't handle a small fire well. The cookstove was always used as an additional heat source on the coldest days, but after the switch, we stopped lighting it for winter baking unless it was already going.

I have always been curious about that style of stove.

I don't think anyone makes things as good as they used to. I watched some YouTube vids of folks cooking in/on this particular stove. They talked about a learning curve, but were overall happy with the results. Of course, I guess they didn't have a 1920's stove to compare it to. I'll report back about cooking/baking after I give it a few test drives. BTW...my grandmother used to cook on top of a pot belly stove! Wow!
show more
2 days ago
wood burning stoves
Vermont Bun Baker Cook Stove

bruce Fine wrote:that pizza looks awful yummy
great idea, ive yet to see a stove anything like that in person. I would think they would be very popular to the general wood heating public. in a quick google of "nectre" stove, its a major investment of $3000-$6000.
I really enjoy not being dependent on anything other than wood from my forest to keep warm through the winter, cutting and splitting wood is one of my most physical activities. just bucked and split and stacked about half a cord the past few days. ive got 5 dead trees spotted to cut in the coming weeks.
on subject of SHTF, I'm pretty sure producers will keep producing and packers and copackers will keep on packing and truckers will keep on trucking and stores will keep on selling. I suspect the giant oil and gas companies will do whatever they have to do to keep selling gas and oil

LOL. That's the fist thing I thought when I first saw this picture a few months ago. I agree, things will continue if the SHTF, but everything may be in shorter supply and take longer to get.
show more
2 days ago
wood burning stoves
Vermont Bun Baker Cook Stove
Thanks, Tom. This one is not a Vermont Castings. It is made by an Australian company by the name of Nectre (https://www.nectre.com/en-au/wood-fired-ovens/nectre-big-bakers-oven#m-au-p-18). They call it The Nectre Big Bakers Oven, but when sold in the USA, it is called the Vermont Bun Baker. It is pricey (a little over 4 grand), but it is extremely well built and has a good reputation and reviews. (Weighs 550 pounds!). It is available with soapstone veneer, but we decided against the soapstone because we think the bare stove will fit better into our old farmhouse. I'll post a couple of pics once it is installed.
show more
2 days ago
wood burning stoves
Vermont Bun Baker Cook Stove
In these uncertain times, we decided it was probably time to get a wood cook stove if all else fails so we can use it for cooking and heating the house during the winter. While we have oil heat, a propane cook stove, a propane heating stove, and a whole house generator, if the SHTF and we can't get oil/propane and the electricity fails, we'd be up the creek in the winter. After looking at a lot of models, we ordered a Vermont Bun Baker XL which has a generous cooking surface, an oven and puts out enough BTUs to heat our whole house. (http://www.vermontwoodstove.com/sample-page/soapstone-wood-stoves/#!/Vermont-Bun-Baker-XL/p/54023116/category=8289041) Delivery won't be made until early December, and hopefully it will be installed soon afterwards.

We are looking forward to this new addition, one of the last that will put our minds at ease should the worst happen.

Anyone else out there have a VBB?

Playing Old Time & Bluegrass Fiddle
@Johnny Mango and @Samnantha Wilson …  sorry I haven't posted in this thread in some time. I have been working hard on my blog and my fiddle since I last updated here. Thanks for your interest. I do have a few early progress tunes recorded on my blog, Johnny, but haven't done any lately. (I really should update that area.) Lately, I have learned to play Angelina Baker, the Battle Hymn of the Republic (better now than the first recording I made!...LOL), Amazing Grace, Yankee Doodle, When the Saints Go Marching In, and Oh! Susanna. Progress has been forward, but slow. I only finally found an old time teacher a few weeks ago.

Anyway, if you are still interested, check out my blog. I now have 22 pages and over 90 posts in it. https://fiddlingforolderfolks.com

A comment about the place of music in life

Chris Kott wrote:
I can't do simple tasks with my mind wandering without finding myself singing. At those times, it may be lines from a massive choral work, a solo jazz number, or some random classic rock. Hell, it might even be a jingle from some random commercial.
-CK

I can relate to this. While I don't always realize it, I have been told by others that I am constantly humming, lightly singing or lowly whistling a tune. I know sometimes I will do this with a tune over and over because I have a family member who will put on a song on the radio just to get me to "change my tune".
show more
1 year ago
music

A comment about the place of music in life

Jason Hernandez wrote:
That same book I referenced earlier also said that, according to the best research, "talent" is not a real thing, but rather, a label we apply after the fact to the ones who worked the hardest. It said that it takes 10,000 hours of work to become a virtuoso, and that virtuosity is within reach of anyone who has the time and discipline to put in those 10,000 hours.

Now that I have decided to learn how to play the fiddle, I have read very similar statements by Wayne Erbsen:

Some people have more natural ability to learn musical instruments more than others. However, after teaching people to play for over fifty years, I still feel that determination is more important than natural talent. In fact, if I had to choose between having talent vs having drive, I’d pick drive every time. People with talent sometimes don’t appreciate their gift and often squander it. On the other hand, people with drive tend to succeed at whatever they’re working on, be it the fiddle, or pinochle. If you’ve got the will to learn to play the fiddle, and the drive and determination to focus and apply yourself, I have no doubt you’ll be successful.

and by Dr. Josh Turknett in speaking about learning a musical instrument:

Those who have reached the level of mastery have done so because they were masters of the learning process, or masters of changing their brains. They did not reach mastery on account of any special genetic gift, or talent. 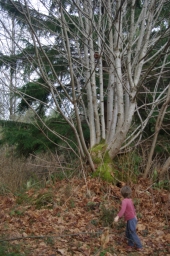 Tree Fort House
Oh boy! That looks like they are having fun. I had two large apple trees in my backyard that I used to climb all the time as a kid, sometimes just to pick and eat apples. Other times, these trees were my fort, spaceship, hide away, or some other imaginary place depending on what games we were playing.  We also had a huge maple tree taller than our three story house to which my father attached a rope swing up about 30 feet. That swing could swing clear over into our neighbor's yard. Those were the days!

I hope these little guys continue to have fun with their Tree Fort House. Post more pics if they make any modifications. I would love to see them.
show more
1 year ago
kids

Gail Jardin wrote:I would not consider myself a fiddle player, but I have a fiddle that I attempt to play on occassion. I would love to  become proficient enough to play old bluegrass songs and hymns. My biggest issue is tuning it as I find it impossible to tune by ear and I break more strings on the fiddle than I do on a guitar.

If you find it impossible to tune by ear, there are free online tuners that may help you. Here is one from Fiddlerman: https://fiddlerman.com/fiddle-learning-tools/online-tuner/
Just click on one tuning peg at a time.

As far as breaking strings, I found an article which may be helpful: https://www.connollymusic.com/stringovation/why-do-my-violin-strings-keep-snapping


Aaron Tusmith wrote:mandolin player myself but have been around fiddle players my whole life, and I can play a handful of tunes on the fiddle. listen intently to all the bluegrass fiddling you can, be patient and avoid developing bad habits early on. Take's Bluegrass Album Channel is an excellent source on youtube. Pitch recognition is important, and having a good musical ear is essential for fiddle playing, with no frets you must have a great ear to even play the simplest tune. Best of luck!

Thanks for the advice. One thing I have already learned from all the reading I have done, is that bad habits are usually formed early on because the student does not master the basic steps before moving on. I have signed up for online lessons with Dr. Josh Turknett at https://oldtimefiddle.net
He is the inventor of the Brainjo Method and his home page describes his method.

My fiddle arrived from the Fiddlershop today