Steve started his first "permaculture" garden when he was about 7 years old and has been addicted to growing things ever since! It was only about 20 square feet back then, and he didn't know much about gardening except what was on the back of the seed packet, but he knew he didn't want to use any fertilizer or pesticides, and wanted to grow everything as naturally as possible.
Years later, when he got some land of his own, he started planting a larger garden, berry bushes, and fruit trees, and also discovered permaculture and Permies! Permaculture has made growing things so much easier and enjoyable! He is passionate about growing things naturally using natural farming and permaculture methods to minimize work and maximize enjoyment!
He is also passionate about saving seed and creating new and locally adapted vegetable and own root fruit varieties to increase the natural growing vigor, flavor, and pest and disease resistance of the plants, to make them easier and more enjoyable to grow.
Creating a plant nursery selling these types of plants occupies most of his free time right now, and he is hoping to start selling these types of plants and seeds soon! He has learned so much from the Permies community and is excited to learn and share our experiences together!
Zone 7b/8a Temperate Humid Subtropical, Eastern NC, US
naturalplantnursery.com
Apples and Likes
Apples
Total received
746
In last 30 days
8
Total given
3434
Likes
Total received
2967
Received in last 30 days
17
Total given
32824
Given in last 30 days
205
Forums and Threads
Scavenger Hunt

Natural remedies for cold sores
Apple cider vinegar with the mother has worked like a charm for me for these and some other skin sores.

but just for a few seconds, and then it generally scabs over the next day and starts to heal pretty quickly.
show more
1 day ago
food as medicine

Monthly Food Forest Tours! Let's create a food forest together!
This blackberry is growing up through the pokeweed!
show more
1 week ago
forest garden 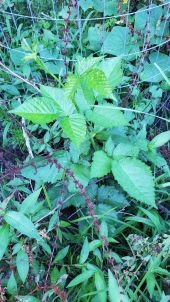 Growing Blackberries Naturally
This is the blackberry plant that formed the fruit above. It grew well this year in the partial shade of pokeweed, and it made its way up into the full sunlight!
show more
1 week ago
berries

Monthly Food Forest Tours! Let's create a food forest together!
My first and only blackberry ripening this first year. Production should really pick up in the second year next year!
show more
1 week ago
forest garden

Growing Blackberries Naturally
My first and only blackberry getting close to being ripe this year back in August. It was pretty neat to see a berry the first year. Next year production should really get going in the second year.

I wasn't around when it ripened, so a bird probably got to taste it.

Monthly Food Forest Tours! Let's create a food forest together!
These photos were from a few months ago, trying to catch up.

The pineapple guava are looking really healthy and a nice green color. I hope they survive our winters here.
show more
2 weeks ago
forest garden
Winterizing grape vines - is it actually needed?
Congrats on planting some grapes! They've become one of my favorite plants to grow.

I do similar to how Joseph mentioned, as I just let the vines die if they can't survive on their own in my climate, mostly due to heat and humidity or disease here in my climate. If it isn't adapted to my area, I'd rather just grow another variety that will be vigorous, tough, and productive with little input, than spend a whole lot of time and energy trying to baby it along. Then I have time to plant even more varieties! 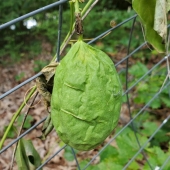 That reminds me, I need to go pick some maypops!