Underground housing
thanks I just checked it out.  Congrats on finally breaking ground.  Is it going to be a one story or two?

Do you have any pictures or a blog or something? 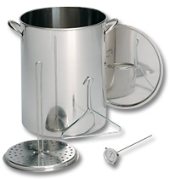 video on small farm maple syrup operation
This was posted on another thread and I thought it should be shared here.

This is 6" deep instead of the 4" that the hotel pans are (at least thats whats the ones I purchased were.  So this is quite a bit bigger
show more
10 years ago
homestead
gravity fed water pressure issue
Well you starting me on a search.  I become obsessive when it comes to passive solutions lol.

This is expensive I'm sure but something similar could be hacked.  It mentioned 12 GPM in company website.

maybe just a T in your plumbing and 2 elbows then add another shower head....
show more
10 years ago
natural building
gravity fed water pressure issue
Sounds very similar to the situtation we have in our new house we are building.  We have 25 or so of head plenty of flow (maybe 15 to 20 gpm) .

I have not gotten to this point yet in our build.  However we have a 2" main pipe that feeds 2 1" lines (one for water pre-heater one for cold.

My thought when we got to this point was to move the shower head to over your head.
2nd part would be to get a bigger head this way the low pressure water falls on your head instead of having to shoot outward.  If you find any shower heads that accomidate bigger then 1/2" pipes this would help also.  Let me know what you find or decide.  Saves one more piece of junk to fail,maintain and pay to run. 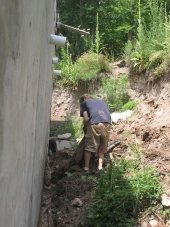 toxicity, 'earthtube', other building materials ?
We are putting earthtubes and this whole PVC vs Polyethylene debate  has been going on in my head for a bit.  I stubbed the walls out with PVC (per naturalhome.com) site.  Then had some pvc outsided and poly inside pipe i used as well. 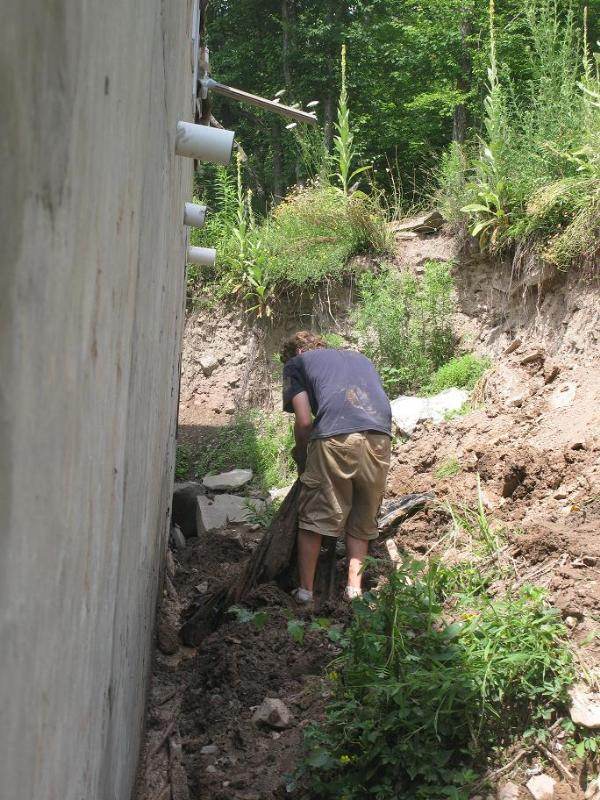 However as time goes by I really don,t want the air exchange to be made with pvc.  My knowledge of the chemicals is not that good .  BUT , when i cut pvc with a skill saw the smell makes me want to puke.  When I cut black plastic tubing absolutely no smell.  Me thinks pvc is nasty stuff

I think I will use black poly pipe instead.  The corrugated stuff has also been used in an earthtube install i have seen online.  They ran a circular saw down the bottom of the pipe.  This allows any condensation that does occur to drain into surrounding soils.  Obviously with a high water table this might not be the best way to go lol.

I do not think that the corrugated black poly is as strong as the pvc (compressive strength) but it would certainly be easier to install vs the 10, sections the pvc pipe comes in and all the elbows that would be to be installed.  I would imagine that the flexible pipe would decrease the resistance that air would have coming in, being that there is no hard angles to slow draft.

The corrugated poly pipe also have double the surface area (roughly) of pvc allow more surface area to allow heat exchange.  This might allow a shorter distance the pipes would need to be run.

show more
10 years ago
wofati and earth berm
SIP homes net zero?
Those tiers are a really good idea.  We are in the middle of our passive solar home now.  With out knowing your location look into what the location offers as far as passive approaches.  Ours had a natural spring so we built the house below it...aimed it south , bermed etc.  Maybe a nook from a previaling wind? Maybe orient house long ways towards south?

One caution that I do not hear enough people bring up is air exchanges.  Those air tight homes will become sick homes in time.  You need fresh air.  If you have high medical bills that will wipe out any heating savings fast.

Since we are all about being as passive as possible we have used earthtubes other options include heat recovery air exchange units.  The heat recovery units cost a bit ($1,500?)  to install and then they need to maintained, they also use electric.  We are hoping convection will power the earthtubes.  You might want to check out John Haits book, Passive Annual Heat Storage.
good luck in your venture it's an awesome goal!.

show more
10 years ago
conservation
Earthbag Home
That is a super sweet structure.  I'm so jealous of places that don't have as strict of codes then here in NY.  Where did they build this?

Your friends should be proud ..they built a really nice shelter.

The yurt is nice also.  They seem to have a lot less supports for the roof then I've seen but it seems to hold up fine.

video on small farm maple syrup operation
I also looked around locally and could not find anything, so I ordered it online.  I wish i had the link but i lost it .

Thanks for that link to that book.  The book I've used for a refrence is "backyard sugarin"

Your bit on the plugging of the trees was really helpful.  I've had this internal debate whether or not to plug them.  Your reasons seem very sound to me.  Why do you (as in tree) need an infection rammed into you?  Now I feel good about being a slacker and not plugging them.
Could you describe how you boil down the sap?  There seems to be a sweet spot in syrup production, I think I'm still finding it.  What way do you determine if it's done.  I think it's 67% sugar that you then bottle at?

Having fun listening to the world wake up, it's just a great time to be out side.