How to publish and promote a book?
My wife and I co-founded a small press years ago (and also worked in publishing before that).

And we're writers, so we've seen it all.

We've written a few posts and books on the publishing and promotion journey.

Here are a few:

An interview with publicist and media specialist Jen Coburn
https://www.ashlandcreekpress.com/blog/2016/08/23/an-interview-with-publicist-and-media-specialist-jen-coburn/

How to get published
https://www.ashlandcreekpress.com/blog/2015/10/20/how-to-get-published/

I hope these help!

Of course, the only way to know what works for you is to try all different ways -- computer, typewriter, handwritten, mornings, nights, etc. But that's part of the journey -- and do try to enjoy the journey!

For years I didn't, but I do now.
show more
1 year ago
writing

How long does it take to research a book?
Yes, I think it helps to push yourself outside of your comfort zone. I've often heard the saying "write what you know," which I agree with, to a point. I think you also need to write what you don't know, or want to know, or will never know. I find the books that I return to again and again often leave me with more questions than answers.

The penguins ultimately led to this novel. To see the world through their eyes, to get a sense of what challenges they face day in and day out, it was the beginning of a journey I'm still very much on today. I wanted people to feel for them the way I feel for them.

And as for travel, I do think it's great if you can visit the places you want to write about, but I wouldn't say you HAVE to do that. In my second novel I wrote several chapters that take place in Namibia, and I've never been. I certainly did my best to research the region remotely -- and Google Maps can really help in this regard -- and I was inspired by an actual seal rescue group in South Africa that I got to know, also remotely. I still hope to visit one day...

PS: If you like environmental literature, I should mention a blog/journal that we host at www.EcoLitBooks.com. There are a number of us who review books that inspire us -- and we also post writing opportunities for those who are writing environmental and animal-themed fiction, nonfiction, poetry, etc.
show more
1 year ago
writing

How long does it take to research a book?
Thanks Jay.

And I knew the penguin researchers would be reading it so I had to make sure it was accurate!

Speaking of penguins, here are some pictures from Punta Tombo...

Most penguin species do not live near or on the ice. These guys nest in dirt burrows that may be based as far as a mile inland, though they prefer oceanfront real estate.

They are amazing birds. They swim up to 100 kilometers at a time to feed for their chicks. And they are struggling to find food given the overfishing that's happening everywhere.

A general answer is 'years' -- because there are parts of my life in there from many years ago, such as St. Louis and San Diego, jobs I've held, people I've known.

But in terms of penguins and anti-whaling activism and Earth First! research, I'd say 2-3 years.

The book was inspired by a penguin census volunteer effort I participating in for a week down in Patagonia, on the Argentina side. It took place at Punta Tombo, which at the time was the largest Magellanic penguin colony. I recently returned and will attached some photos. Dee Boersma is the researcher who has been working down there for more than 25 years (check out https://www.washington.edu/research/research-centers/center-for-penguins-as-ocean-sentinels/) and is an inspiration. She and her team have done amazing work in documenting the lives of these penguins and their many threats -- and she has helped cordon off a good portion of the waters down there to fishing, which is a major threat.

While I was there I had a vision of a man on the run from the law washing ashore. And a researcher harboring him and eventually joining him.

That man was inspired by Paul Watson, founder of Sea Shepherd, who I met as part of my research at an animal rights conference in LA many years ago. That experience also made it into the book -- a life-changing experience.

But even with all this research, the bulk of the novel is imagination. Research grounded it but imagination is what connects this to the larger, never-ending battles between evil and good.

Now I'll try to dig up on some pictures.

PS: You can download PDF excerpt of the book at this link:
https://ashlandcreekpress.com/download/TouristTrail_sample.pdf

Or visit this page:
https://ashlandcreekpress.com/books/touristtrail.html

* Welcome John Yunker, author of The Tourist Trail!
Thanks Carla, Diane and Joylynn -- so happy to be here!
show more
1 year ago
writing 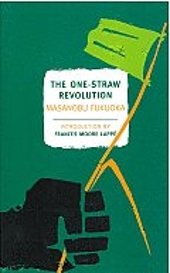 The One-Straw Revolution by Masanobu Fukuoka
We need natural farming, now more than ever.

My mom lived on an Iowa farm surrounded by miles upon miles of productive farmland. But when I visited years ago I learned that nobody could drink the well water. It was contaminated from all the chemicals and minerals sprayed on the crops. Local rivers and streams were becoming more and more toxic, particularly after the rains, as nitrates leached from the soil and into the water supply, finding their way into Gulf of Mexico where we now have a dead zone the size of Delaware. And yet when you drive through Iowa you see miles of seemingly healthy corn crops. Everything neat and orderly and green. But it’s an illusion, and an unsustainable illusion.

Mr. Fukuoka was trained as a scientist, so he knew the risks of chemicals. He also believed that there were better, more natural, ways to fertilize the soil. He gradually developed a system of planting clover (which is a nitrogen fixing plant, also known as “green manure”) and laying down rice stalks as ground cover. And he did not till the soil, not because he was lazy but because he didn’t want to damage the soil and its billions of microscopic creatures that were living within it.

And this brings me to the most compelling idea presented by Fukuoka — that humans, in our efforts to control nature, have only made things worse. Fukuoka wrote:


If nature is left to itself, fertility increases. Organic remains of plants and animals accumulate and are decomposed on the surface by bacteria and fungi. With the movement of rainwater, the nutrients are taken deep into the soil to become food for microorganisms, earthworms, and other small animals. Plant roots reach to the lower soil strata and draw the nutrients back up to the surface.


If you want to get an idea of the natural fertility of the earth, take a walk to the wild mountainside sometime and look at the giant trees that grow without fertilizer and without cultivation. The fertility of nature, as it is, is beyond reach of the imagination.

In other words, if our soil is doing so much of the agricultural “heavy lifting” for us, why are we killing it?

He cites the massive pollution caused by runoff from overfertilized and overwatered fields.


The most commonly used chemical fertilizers, ammonium sulfate, urea, super phosphate and the like, are used in large amounts, only fractions of which are absorbed by the plants in the field. The rest leaches into streams and rivers, eventually flowing into the Inland Sea. These nitrogen compounds become food for algae and plankton which multiply in great numbers, causing the red tide to appear … My modest solutions, such as spreading straw and growing clover, create no pollution.


The good news is that I’m reading more and more about famers embracing cover crops over chemicals. Even some of the research I’m seeing out of Iowa is showing a small (but growing) number of farms adopting cover crops. And, yes, the demand for organic produce is pushing farmers to try new approaches. But there’s also a general sense of unease with all these chemicals we were told would improve our lives. And this is the most revolutionary aspect of the book and natural farming, that it challenges us to question practices and beliefs and so many of us were born into, that we were raised to think of as right.

As far back as I can remember tilling was considered an essential farming practice. You fire up the tractor and turn over the soil. And yet, according to Mr. Fukuoka, tilling is simply not necessary. He has a field that he hasn’t tilled in more than 20 years, one that is more productive than any other farm in the region. So how does he get the seeds into the ground? He just tosses them onto the ground (Nature works in much the same way). And what a “mess” this ground is. There is nothing neat and orderly here. Just clover and rice stalks and no exposed soil, which is another rule of thumb: never let the sun touch the soil.

To be honest, I still appreciate the orderly nature of traditional farms — everything in parallel lines and perfectly in sync. Like so many of those Old McDonald children’s books. And yet I also know there is something intrinsically wrong with massive mono-crops, for soils, for pest control, for the quality of the food itself.

I appreciated Fukuoka’s focus on simple living, as in simple diets. He noted that Japanese were eating more meats because rice was considered a lower-class food. And he argued in defense of plain old rice. And it was nice to see that way back then he saw the environmental impact of so many people giving up grains for meat:


Meat and other imported foods are luxuries because they require more energy and resources than the traditional vegetables and grains produced locally … Brown rice and vegetables may seem to be coarse fare, but this is the very finest diet nutritionally, and enables human beings to live simply and directly.


This book is as much about establishing a relationship with nature as it is about growing vegetables and fruit trees. Ultimately, as the title attests, this book is about revolutionizing the way we treat the land beneath our feet. Even if you have no intentions of tossing a seed onto the ground (though I recommend a few showy milkweed seeds for the monarchs) you’ll enjoy this book.

"Penguins are in trouble"

This from a sobering research report published last week (https://conbio.onlinelibrary.wiley.com/doi/full/10.1111/cobi.13378) by some of the world’s leading experts on penguins. The report notes that “more than half of the world’s 18 penguin species are declining.”

The three species most in danger are:

The report notes that there are only 1,700 pairs of yellow-eyed penguins left on our planet. Galápagos penguin could number fewer than that. And the African penguin, at 21,000 pairs, has seen its population drop from 1.5 million in the early 1900s. To call this an emergency is an epic understatement.

I wrote The Tourist Trail (https://ashlandcreekpress.com/books/touristtrail.html) because of penguins and whales, because I wanted to raise awareness of their plight and the heroic efforts of those who are trying to protect them.

But more important than the book, I also stopped eating seafood.

In the greater scheme, it’s a small thing to do. But if everyone did this small thing we would save millions of penguins, dolphins, albatross, and whales. Because even if they are not being fished to extinction, they are being bycaught to extinction.

The demand that we create fuels the decimation of oceans. We are the problem and we are the solution.

If you’ve given up on seafood, thank you. If you haven’t, please consider it.

If not for you, for the penguins.
show more
1 year ago
science and research