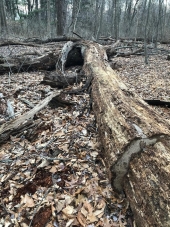 Get a good assessment of whats growing where already, and see if there are any certain trees you can sacrifice to use for your mushroom logs, and in those new opened up sunny patches plant what you like and think will grow there as the bonus! There's tons of maples in my woods and would be my choice when the time comes for me to try and open up an area and make best use of it.

I think there may be some different competition and maintenance involved with taking the forest to food forest approach, and personally I wouldn't expect it to work out as good as a cleared and planned area production wise, just because the forest will be shading and wanting to be forest in its strange strong natural ways compared to intentional original human plantings. I could be wrong, only one way to find out!
show more
6 months ago
forest garden

food for the soul
Thanks for that - very beautiful and inspiring to me this morning!
show more
6 months ago
music

How to deal with a steep gravel driveway with challenging ruts and fun surprises
That one pic almost looks like a rivulet running right through your road. Maybe a culvert pipe there (hopefully big enough to handle the heavy rains) w/ crushed limestone over top would help those areas that are very prone to washing out. Also, on the downhill side maybe a dam of some kind (earth, wood, stone, etc) to try and catch any gravel that might still wash away
show more
8 months ago
earthworks
34 SWF looking for love
Hey there - I'm 99% sure I don't want more kids ;) That 1% chance gives me some room to make a reply though, I think lol.

Anyways, I'm curious as to your whereabouts now? I ask because long distance can be a daunting thing to overcome and things just seem easier and more natural to try w/ people that are within a reasonable distance of each other.
show more
8 months ago
permaculture singles

Matching tractor needs to your land
Have we talked about wheel spacing, ballast, and operating techniques on hilly land somewhere that I missed?

I decided to try out the rotary cutter and start getting used to running the tractor around the land. I think I covered about 70% of where I want to go...I didn't want to push it too hard 1st day ;)

I spent about 5 hrs total just getting the feel for it and overcoming that scary feeling of tipping. I think I'm well within the operating limits of the machine, but one unseen hole can change that quickly.

I kept the loader/bucket on...not sure if removing it would have been better or not? I think I'd need some front weights if the loader is fully removed. I felt like maybe it raised the center of gravity some, but also is nice to be able to drop the bucket (I run with it just skimming the surface anyways) and have some support if things get sketchy.

My rear wheels are spaced in widest position, and each rear tire filled 75% w/ beet juice. I'd also like to add bolt-on center wheel weights in the future, I think. Even with the loaded rears and 5' cutter I still felt the rear was lighter than the front (w/ loader on)

I did combinations of side-hilling, straight up and down, back up, back down, etc. I think it's hard to nail down one "proper" technique...each task can be approached in multiple ways - but getting the experience to "feel" which one is safest is something that will just take time.

I attached some pics to show the angles, they don't look like much, and realistically probably aren't :) Maybe around 17-18*??? Still took a little getting used to though!

Matching tractor needs to your land
I don't have a great update, tractor itself didn't make it to the farm this weekend because it was too bad the dealer sent me a bush hog that had been damaged underneath from a forklift. That was all I really planned on doing out there with it so I kept it here at home in the garage. I don't have a secure place to keep it on the land just yet, but hopefully soon.

I did manage tho, to help a neighbor put in a small water retention area in his backyard. There is problematic flooding in that area, there is a concrete catch basin at the lowest point right at the bottom of the new "dam" but it gets overflowed easily, so he wanted to control and reduce that flow towards it. Took the tractor only about 20 minutes to dig it out, mound the dirt and haul him over a few scoops of wood chips to fill it with from my place :) Was fun, quick and easy so I'd say the tractor fits the "Neighborhood needs" ;)

A friend of mine does tree removal and I take the left-over chips/logs, the loader is worth it's weight in gold! Especially when I borrow the dump trailer! I've done quite a few loads like this by hand on non-dump trailers on and off and it's a looong hard process compared to this.

It's a comfortable and capable machine, already feel my back hurting less in the future...

The real updates will come a few months from now once it's on the farm and doing other things, looking forward to it! Should this be the thread for that? Seems pretty good to me since most questions/topics about tractors will be related to the title.
show more
9 months ago
gear

Matching tractor needs to your land

Congrats on the new tractor!  It is amazing how much a tractor can improve your productivity.

If you don't mind me asking, I do have a couple of questions about your awesome recent purchase.

1)  Is the hydro control a treadle pedal or is it the twin touch?  My first tractor was a subcompact and everything boiled down to JD or Kubota.  Really they were very similar machines, similar prices, similar specs, etc.  One thing that pushed me in the direction of JD was that the hydro control on the JD allowed my legs to stretch out while on the Kubota my knee was always rubbing the steering wheel.  I think that Kubota is moving in the direction of having the twin toe touch pedals in the manner similar to JD.  I am just curious as to whether they are there on all there tractors.

2)  Another issue that was a big one on the little subcompacts was that the on the JD, the loader control is a part of the tractor while on the Kubota the loader control sticks out from the loader.  On the little subcompacts (and yours might very well differ as it is a totally different animal), I could access the seat from either side on the JD as the control stuck up from the floor but on the Kubota the horizontal control basically cut off access from the right side.  Again, this was probably a bigger deal on the subcompact than your new tractor.

3)  Does your new tractor have the new DEF/regen stuff?  I sold my subcompact and got a JD 2038r which is similar in size to your new tractor and I have this extra stuff attached.  I have heard horror stories, but mine just went through its first regen cycle and it was not bad at all.  On mine, when doing the regen cycle, the tractor wants to idle higher than it would otherwise.  If I moved the throttle up to 1500 RPMs, then the tractor's brain would not let it come back to a normal idle.  It was doing this for a couple of weeks as I was doing a bunch of quick tasks.  Then I bush hogged my acreage, ran the engine high for a couple of hours and now the tractor will idle back at low RPMs again.  It was nothing like some people said where the tractor would not shut off for something like a half hour after turning off the key.  Personally I think the whole affair is overblown.

Anyhow, I am always interested in hearing about new tractors.  These have been a couple of minor issues that I obsess about, but in any case, I wish you the best of luck on your new tractor.

1) It is the treadle...I think I would prefer the side by side pedals but Kubota just simply doesn't really offer that option in a tractor size I wanted. It's a minor setback and I'll get used to it. At first I wanted a Kioti just because of that reason! It gets delivered tomorrow and I'll get a better feel and report back.

2) That issue is there on the L2501. I can probably sneak on through there though I'd have to mount a step and grab handle to that side! It doesn't really bother me, I was willing to accept a few downsides like this on the Kubota

3)Good to hear your re-gen system worked like that, yea doesn't sound like too big a deal at all. Being up in the rpm a bit seems to be the way a HST tractor ought to be run anyways. I purposely stayed under 26HP to avoid the re-gen system and DPF filter setup. I like the idea of being able to idle and use low rpm if needed w/o that system on my mind. I also figure it's just more to go wrong down the road, but I sacrifice a lot of power. I'll know for sure how this machine stacks up to tasks in the coming weeks once I get it down my farm. It's rough and hilly :)

Alternatives to concrete footing
I have a 14x28 shed that just sits on blocks at about a dozen spots. I'm moving it to a new area (after I level it of a little better) and was thinking about pouring a footer - but then I figured I'll just make a foundation out of tamped blocks and call it done. They make some big screw in anchors I was planning to put on all four corners and attach w/ steel cable in case of extremely heavy winds. I like the idea of jacking it up and shimming when (not if) things start to move.
show more
9 months ago
natural building