White dust/covering on raspberry plant
Thanks a lot for the ID and the links!

I bough the plant in a hardware store this year, and the affected branch sprouted from last years woody part of the plant.
I cut them away along with some parts of the wood, and really felt sad afterwards

Now i am in dillemma:
I bought a lot of raspberry plants to grow them on my balcony for nusery stock,
so that i can plant them on my plot once the situation allows it.
I am not sure if this is feasable anymore...did all the plants on the balcony get infected by now?
Should i trash them and start over to avoid bringing disease to the plot?
I think it would break my heart, but planting them on the plot just to next year discover that i introduced
disease?
Or is powdery mildew so common that it would show up at some point anyway?

reagarding the cure:
Milk probably works because of the bacterial life in it (the links states fresh milk was used).
The Link also says, that the spores don't germiante when the foilage is wet in general.

I think i will go for the actively aeriated compost tea and spray all of the plants,
hoping that the disease does not propagate.

EDIT: according to http://ipm.ucanr.edu/PMG/PESTNOTES/pn7494.html,
one should cut down the affected canes down to the root:

If raspberry canes develop powdery mildew, remove the canes down to the roots during the dormant season. Infected canes of berries and grapevines have distinctive weblike russetting. Remove infected prunings from the garden area and destroy them.


Does that mean i should cut away all growth from the same rootstock?
show more
5 days ago
berries 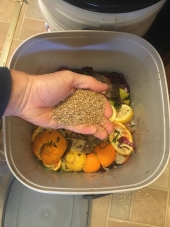 Smallest setup for composting on balcony (odorless if possible)?
Everytime i emptied the kitchen scraps into the bin i feelt like i should compost,
after i reading "Teaming up with microbes" i think i need to compost,
and after if discovered powdery mildew (thanks to Bihai Il for ID!)on my raspberries i KNOW that i need to compost.
Primarily because i need the actively aeriated compost tea.

So the amount of produced compost does not have to be high,
and initial cost for buying/building the setup and ongoing maintenance don't matter munch to me.

However i only have my balcony which gives me two severe limitations:
It should be as small as possible.
It should not smell or be hazadorous in any other way (too often i have seen compost with mold on it),
as i want to spend time on the balcony.

i have just discovered this white coating on one of my raspberry plants.
Looks like some sort of fungus to me, but when i searched the Internet for raspberry diseases
nothing that even remotely looks like this popped up.

The Plant is in a container with earth/compost mix, has been growing quite healthy the last
weeks since i got it.

Can anybody tell me what this is?
Should i cut the branch off?

show more
1 week ago
berries
Cross pollination in cereals
So if i want to plant Einkorn Wheat(Triticum monococcum) because of its resistence and toughness and want to keep the
seed, i should not plant any other wheat, but the other cereal species don't cross pollinate.
Ok so this is why i didn't find a table.

THank you very munch for you elaborated answer.

Do you mean a couple of dozen variaties?

show more
3 weeks ago
grains and pseudograins
Cross pollination in cereals
Hi all,

does anybody have a table of which cereal can cross pollinate each other?

I am asking because i would like to growsome small scale cereals from true to seed variaties and save the seed.
show more
3 weeks ago
grains and pseudograins
Solar panel advice for the technologically incompetent?

Burl Smith wrote:Two of these Wind Generators would give you 1000 watts both night and day in a 24 mph breeze. I'm a complete noob to these technologies also.

I highly recommend not to trust the figures manufacturers give about cheap products in general.
Especially when it is about battery capacity the "cheap chinese" manufactures are notorius liars,
probably the same applies to the power producing units.


For this specific unit one customer wrote:

Not to mention that THE CONTROLLER IS RATED FOR 15 AMPS MAX OUTPUT. Meaning the wires aside, the generator is falsely advertised as 500W, which is the point of my first comment.

growing apples from seeds vs. cloning
Hi all,

much of the discussion here seems to go around the taproot,
but some very interesting reasearch about it has not been mentioned yet.

According to Charles Darwin organisms are have two opposing poles,
a kognitive and a sexual pole. So with plants the tip of the
taproot("Apex") would be the "brain". This documentary picks up on this,
from 5:30 to 9:15, unfortunately it is in german:


The researcher mentioned in the documentary is Dr. František Baluška (unversity of Bonn, for publications see here https://www.uni-bonn.de/forschung/Drittmittel%20und%20Projekte/forschungsberichte/forschungsbericht-2006-2011/mathematisch-naturwissenschaftliche-fakultaet/institut-fuer-zellulaere-und-molekulare-botanik-izmb/dr.-frantisek-baluska/publikationen )

The essence is that plants use their apices to communicate(!) with each other and coordinate their growth.

So in my opinion a plant deprived of its taproot by being transplated
corresponds to a lobotomized human.


Another thing on the transplanted vs. from seed discussion:
When you have a rather uniform soil the growth of the roots may
be more or less arbitrary, but when you have a structured and cracked
bedrock underneath the soil(for example karstic landscapes) then the roots have to specifically find those cracks where the water accumulates.
I just dont believe the transplated plant grows comparable roots to the plant from seed in this situation.
show more
1 month ago
plants
Raspberries in a container - Which plants are suitable for a guild?

Gurkan Yeniceri wrote:Garlic, Tanacetum vulgare and Ruta graveolens are the companions but I am not sure about the guilds.

Ok, putting garlic in should be no problem, but Tanacetum and Ruta seem to be a bit difficult to handle in terms
that they can burn your skin/cause allergic reactions. On top the Tanacetum is a neophyte here, so one more reason to avoid it.


i found another thread with some interesting information:
https://permies.com/t/3702/berry/raspberries

Paul Gutches wrote:Coupled with the note that nettles make a great companion to raspberries, and that raspberries tend to have shallow roots, it almost seems safe to say that raspberries are not fond of excess nitrogen.

Figuring... the chips will draw much of the shallow nitrogen down, and nettles are fairly heavy consumers of it.

So it seems that a N-Fixer may not be the right companion for a raspberry?

What do you think, should i pull out the clover again and only use sawdust as ground cover?

Jamin Grey wrote:t even my *water* is too alkaline.

You should use rain water in this case.

Also if they are drowning, a frensh drain is the way to go,
maybe even putting coarse gravel underneath the plants.
show more
1 month ago
berries
Raspberries in a container - Which plants are suitable for a guild?
So today my N-Fixers arrived:
Elaeagnus  commutata, e. angustifolia and Hippophae rhamnoides "Sirola".
As far as i know, all of these have and extensive and very competitive root system.


I think for the first 30L Container i will try a evergreen blackberry and Hippophae rhamnoides "Sirola".

For the smaller 12L Containers i will try clover. It should provide ground cover and fix nitrogen.

Any comments and recommendations are still welcome.
show more
1 month ago
permaculture