Designing for wildfire and smoke
I'm in SE Indiana and we don't have large wildfires, well, we haven't historically had large wildfires, but I fear that could change if the intensity of our droughts continues to deepen. If I had opportunity to build a new house it would have zero combustible material on its exterior. Steel reinforced concrete or masonry or at very least metal siding and a metal roof. All ventilation spots like under soffits would be well sealed with non-flammable fiberglass insulation, leaving no possibility of entry to wind-blown sparks.

It's bad enough when grass or trees burn but today's fires are houses and cars and gas stations and and....  Every nasty thing you can think of is in that smoke. No amount of plants or trees of any type are going to stop it. To deal with that I would do want a robust hepa filtration system and an off-grid way to power it. I think they would be fairly easy to build using large hepa furnace filters and a small fan. I have one in mind using a 12-volt automobile cabin fan and a small solar panel.
show more
2 hours ago
permaculture
Composting and Varmints
I just put mine in a tight surround of woven wire, they can climb in and stir it around for me they want but they can't really scatter it.
show more
1 day ago
composting 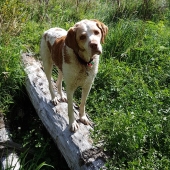 Weird things dogs have done
My dog found a dead frozen cat by the river one time. He knew if I got ahold of it, I'd take it away so when we were ready to go home, he took into the weeds and hid it. Next day on our walk he'd go get it. He didn't chew on it, he just carried it around with him. Finally, I got it and threw it in the river. Next day they must have opened the flood gates downstream because the water had gone down, exposing where I threw it and he found it again. I gave up and this went on for a couple of weeks.
show more
1 day ago
meaningless drivel 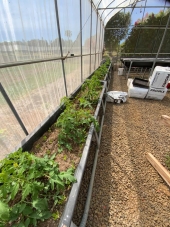 Su Ba’s Community Farm Project - Adding Permaculture
Glad to hear from you Su Ba and that you are ok.  You were the first thing I thought of when I heard the mountain was waking up. As screwy as it might sound, I wish I was there to see it. I read just a minute ago that the lava was only a few miles from the saddle road, but had stopped its advance, for now.  Aren't you in the approximate vicinity of South Point.

Kilauea was acting up a just a little bit when we were there several years ago, liquid rocks running out the ground is something I'll for sure never forget.
show more
1 week ago
small farm
Favorite seeds of backyard songbirds this winter.
Plain sunflower seeds seem to attract the most birds for me. Tit mouses, cardinals, nuthatches, some but not all woodpeckers, chickadees and some others all like it. Juncos seem to like cheap millet and cracked corn. Hoggish blue Jays like all of it so I scatter my seed on the ground instead of in a feeder, that way nobody can hog it all. It's fun to watch them all popping around scratching in the leaves. I also use a suit feeder, all of the woodpeckers and the nuthatches like that.

I have small garden pond with a pump that runs year-round. During very cold weather I see more birds and more kinds of birds drinking and bathing than I do coming for the food.
show more
1 week ago
wildlife
Rocket Forge?
How hot can a wood rocket burner get? I need almost 1800 F to melt silver. I'm wondering if it won't quite get there on its own could adding a hand powered fan to the air intake push it up there? I only need to melt small amounts at a time and I'm talking pure .999 silver not copper alloy sterling.  What material might be needed to construct it? Would cast iron stove pipe work?
show more
1 week ago
rocket mass heaters

Would like input on potentially drastic option for garden beds
Goodness, I had no idea that vinegar acted as an herbicide, learn something new every day I reckon. Grass is the biggest issue I have with weeds as well and probably even many of the same ones since I'm not all that far from you. In fact, anymore perennial grass is about the only thing I consider a weed.


Eric Hanson wrote:I guess I should be more clear when I used the word “weeds.”
In this case, 99% of the weeds are grasses.  Their root masses are so thick that pulling them removes a significant quantity of my hard-fought bedding.  Just leaving it in place overwhelms the garden, so I need to kill them somehow, even if that is through smothering.
Eric

Removal of your bedding need not be permanent; you might replace it later with the added bonus of the dead grass. In some cases, you might be able to just turn the whole mess upside down with the grass roots sticking up, I do that a lot. You can also turn the grass into fertilizer by submerging in a big tub of water for a couple of weeks.

I trying to picture what you are up against, if the entire area is covered with well-established grasses, then it's about the same as mine was when I first came here. It took me a long time, a little at a time to get it to shape. I think now if doing it again, I might go with the solarization method and not worry over the effect on soil organisms. Just keep a health supply of them in a compost pile and use it to add them back when the solarization if done. If you have access to them a deep cover of leaves might do the trick as well. I don't like using wood chips because it seems the grass manages to find a way through, and it takes so long to rot. You have to be careful that it stays on the surface too or it will rob nitrogen and seems to me if mixed in the soil makes it dry out badly.

Cardboard is recommended a lot, but I don't allow it anywhere near my garden. I spent a couple years unloading trailers from China at a big box distribution center. They take steps (not always successful) to keep live critters from arriving along with the product, the chemical stench was sometimes extreme. Cardboard is probably safe, sometimes, or maybe even usually, but I want nothing to do with it.

It sounds like you are doing a hybrid situation.

Even more, black locust has a LOT of BTUs per cord.  A lot more than pine or fir.

Would you say that our numbers seem about right to you?  Naturally, we would like to find sources for really hard numbers, if you can find them.

I guess you could say it's hybrid, sort of a compound hybrid maybe. The house has a 600 sq ft footprint with two little bedrooms in an A-frame upper story, so 1200 sq ft all together. Downstairs is 3/4 underground on the north and west, mostly windows on south and east.  It doesn't freeze downstairs even with no heat at all. It also stays fairly cool in summer but hot humid air coming in when the door is opened makes it damp without a dehumidifier. I haven't figured out a non-electric method to deal with that, I'm afraid maybe there just isn't one.

I'll look over your numbers and do a little figuring, but I didn't even know what a cord was, so I don't know if I can be much help or not.


show more
2 weeks ago
rocket mass heaters
annual operation/fuel cost of all types of heaters
I have a 500-gallon propane tank, but they only fill it to 80% and I only buy it in summer when it's cheaper. I start the winter full and end up at about 50 - 60% at end of season, so generally use about 25% or 125 gallons. When I filled this past summer, the bill was around $250.

I also have the smallest Vermont Castings stove made and the smallest Stihl chain saw made. My spot under the porch where I stack my wood is about 6' long and I stack a single row about 6' high. I cut my wood to 12" to 14" length. I just looked up and found that a cord is considered 128 cubic feet. I estimate I burn a bit over 1/2 a cord per year sometimes a bit more but never a whole cord, I don't think. We burn a lot more cooking outside than heating the house.

On a cold (25 F or lower) but sunny day, the house is plenty warm from the sun. A hot fire of very well-seasoned black locust burned for a couple hours in the evening keeps it warm till we do to bed. A single 12" log of very well-seasoned black locust dropped in the hot coals will burn, not smolder, all night. The furnace is mostly just used when no one will be home all day.

I harvest from my own renewable wood lots and haul it over to the primary stack with my hand cart. I estimate in a full day of work and one 2.5 gallon can of gas I can cut three or more years of wood. I don't really know for sure because it's been three or four years since I cut wood.  My most wasteful thing is because I don't know how to sharpen a chain, so I just buy a new one every four or five years.

About 5 years of well-seasoned black locust is currently under cover, another fifty or more years' worth is standing. If need ever arises I'll ditch the propane.

One of those RMH sounds kind of fun but can't justify the effort and expense of replacing my current system, plus I don't think we really have room for it.

I de-bark my already seasoned firewood as I move the winter supply to the porch. Any live critters I find I feed to my fish all the bug poo and whatever else falls out is saved for my seed starter the next year. Bark itself is used for kindling or sold on Ebay for growing orchids.

Apologies if this is completely irrelevant to Montanna.  Do you guys even have black locust?

show more
2 weeks ago
rocket mass heaters
Drying a standing tree before cutting for firewood
I have a couple of black locust wood lots; I always kill the trees and leave them standing before cutting. I leave mine for at least two years before cutting for wood and another couple of years under cover before using.  The ringing with a chain saw trick does work but sometimes, they heal back a bit and don't die and often lots of sprouts shoot up around the base.

I prefer to completely de-bark the trunk close to the ground. I use a sharp hatchet and a hammer, first chopping through until I can get the blade under the bark and then tapping it all the way around. This kills it completely and pretty much immediately. By the time I get ready to cut wood all or most of the upper branches have already dropped off so when the tree falls it doesn't damage other trees as badly. Those smaller upper branches are used for stove kindling and in the outdoor grill.
show more
2 weeks ago
homestead