Vegan Organic Compost
I would only use manure from animals that was fed a vegan diet. So manure from a commercial / factory farm I would consider toxic.
show more
7 years ago
vegan

vegans even 'sort of' - lets talk -
I went vegan for health. Been very happy with results. Honey is the only product I still purchase and use. I see no down side eating honey or supporting Bee keepers.
show more
7 years ago
vegan
Can I compost these?

So it's Okay to compost the shiny and glossy parts of newspaper inserts? How about soda and beer cartons?
show more
7 years ago
composting
vine bores
What prevention can I take to keep vine bores out of my squash this year.
show more
9 years ago
bugs
Saving seeds from cooked fruit?
So if I buy seeds labeled Organic or Heirloom the seeds would be saveable / worth saving?
show more
9 years ago
organic
Got wood gas.
Got wood gas. 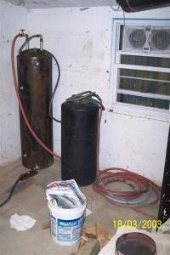 Picture #1 shows how you wrapped copper pipe around the insulated feed pipe for your RMH.  The black thing to the right is the outside of your RMH.  It's going to fit over that brick-and-copper-pipe device on the left.  As fuel is burned, the heat will heat the water in the pipe.

The black 30 gallon water tank is not part of the RMH. I just had it setting there. While I was trying to figure out how to heat water with the RMH. Using a sealed tank to heat water, not a good idea the tanks sometimes explode.  I used a plan barrel to cap the riser.

Picture #2 is just a pair of refurbished water heaters that you use to store the water heated up by picture #1.  They don't provide hot water for bathing or any other purpose; they just radiate heat.

I'm using the 30 gallon and 50 gallon tanks as radiators for my outside building. I fire the RMH for about 3 hours before I go to bed. The RMH heats the water being pumped through the tubing and carries it to the two tanks in a closed loop.  Its enough to keep the shed warm till morning.  I can also adjust valves to heat water in a 500 gallon storage tank that I use to wash dishes. Also use solar to help heat the large tank.

Yes. Used pipe strap to to pull the sheath tight and clay / cob to seal the edges. Exhaust  stays in the RMH.

Picture #4 is another view of your finished RMH.  It also shows where the copper tube from inside the RMH exits the RMH and goes to the two refurbished water heaters.

Questions: What is the water in the top black barrel used for?  Did cutting a hole in the top of your burn chamber affect the operation of the entire burn system?  (IOW, does the smoke still go out the chimney?)

The bottom of the water barrel on top is about two and a half inches from the top of the riser. notice my chimney is more like a regular wood stove. No trouble with smoke back. I replaced the water in the top barrel with damp sand for mass. The water could have been used as a batch hot water heater. I may put water back into later and use it to melt snow off the drive and walks.
show more
9 years ago
rocket stoves

for heating the living area why not use a small car radiator with a thermostatically controlled window fan?

I think a car radiator with a thermostatically controlled  fan will work.  It would be like a car or truck heater but the working fluid temp would be less for safety.
show more
9 years ago
rocket stoves

Rocket Mass Water Heating
Few things I tried. I used a half barrel beer keg wrapped with hundred foot copper tubing. 3/4" best to help prevent steam formation.  I'm using 1/2" now but my pump kicks on at 130F.  An adjustable snap switch controls a 12 volt diaphragm pump.  It works but it takes time to build up heat. It would be best to have a bulk insulated storage tank to store hot water. I use both wood and solar to heat water. Just a basic rocket with copper between the riser and cap barrel.

Two salvaged hot water tanks with leaks JD wielded. I use them as radiators. I use old garden hose to plumb the tanks. They help release heat in the living area. 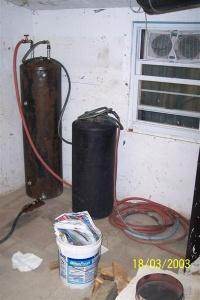 Okay here i took a barrel split it down the side. used it as a retainer for lack of a better word. To set a barrel on top of the rocket.  I put a hole in top of the rocket cap barrel so that the heat / flame strikes the bottom of the barrel stacked on it. 35 gallon of water in the top barrel. when it gets hot enough a 12volt bilge pump moves the water. Works OK. but this is just an idea I got away from.

Sealed containers tend to blow up if heated.

This barrel is not sealed tight.

Sorry no pix but a idea. The barrel I have on top, I cut it so I had the bottom one third of the barrel now sets on top of the rocket ,secured by the split barrel. In the third barrel I placed 3 coils of copper with coils spaced a little. Filled the third barrel with sand. Now, when I fire the rocket the sand acts as a insulator but when I pour some water into the sand it becomes a heat sink. Transfers heat to the copper very well without the flame and creosote exposed. 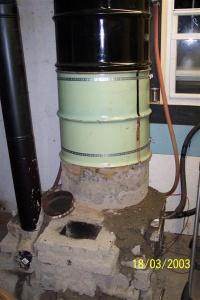 show more
9 years ago
rocket stoves
enclosing back porch with salvage and plexi
Just a thought. You got the glass. http://www.youtube.com/user/tonyfixit#p/u/5/30XVx3qTXAo