Looking for Nova Scotians.
I own land on Cape Breton, but am living in the US currently.

P3 is offering a PDC course near Baddeck in June, 2013. http://www.p3permaculture.ca/NS_June_PDC.html

Have y'all spoken with these folks: http://www.novascotiapermaculture.net/ ??
show more
7 years ago
great white north
Gout

Lisa Allen wrote:For those interested, if you live in the Northern USA, nearly everywhere is a plant called Field Bindweed. In the Himilayan system of Ayurveda, it is the SAME plant as what they term "Ashwagandha" - use the roots and tincture - see Todd Caldecott's website for more info.

You have misread Caldecott. He said that some in the Himalayas use bindweed in place of Ashwagandha (ashwagandha likes the heat, not widely available in colder mountain regions). But they are two very different plants!! Field bindweed is Convolvulus arvensis, a species of morning glory. Ashwagandha is Withania somnifera, a nightshade that looks rather like a pepper plant. Their activities might overlap, but they are different herbs. Bindweed root might help with gout, I don't know. There is much less knowledge about its traditional uses as compared to ashwagandha.

under arm Deodorant alternative
Came across this study recently - hops have some value as a deodorant. Works the same way in beer - hops zap the gram-positive bacteria, leads to a ferment less likely to spoil and smell nasty. 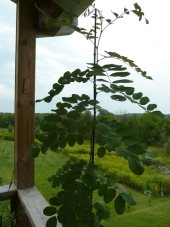 How much land for firewood?

Bamboo is high in silica, and this not only leaves 'ash' - but this ash can fuse together into clumps and this makes bamboo chips a poor choice for automated stoves and furnaces as they are usually designed. But if the bamboo is suited to a site, the per acre productivity can be high.
show more
8 years ago
woodland 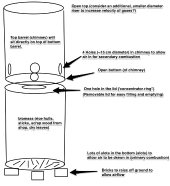 Biochar, is it good?
The water storage capabilities of biochar are not really greater than for organic matter - adding leaves (or wood with hugelkultur) does not rob the soil of moisture - all of these will hold water when water is present, and gradually release it. The thing about biochar is that it is very resistant to microbial decay. With biochar, one loses about half the biomass (and gets heat) in the manufacturing, but then it stays around much longer than ordinary cellulose and lignin from compost. On balance, biochar ties up carbon much longer than compost or mulch.
show more
8 years ago
biochar
Getting into the science of climate change
Another component of the urban heat island is the huge amount of energy being poured into cities. We heat our leaky houses, run cars and billions of appliances - mostly with solar energy that was stored up in fossil fuels gradually over millions of years, but it is being released in small areas over a few centuries.
show more
8 years ago
meaningless drivel
Getting into the science of climate change
All of the global climate models incorporate albedo (reflectivity) of the planet.

James Lovelock wrote about 'Daisy World' in 1983 - a hypothetical self-regulating planet covered with growing flowers. He noted that if temperatures were to cool for whatever reason, darker flowers would have an advantage, their would be random mutations towards darker flowers, they would multiply faster, absorb more light, and the planet would ultimately become warmer. And if the planet became hotter, lighter or white flowers would be less prone to overheating, they would be selected for and breed faster than overheated dark flowers, and eventually the planet would reflect more light and be cooler.

Lovelock is all for re-forestation as best I understand, but he doesn't see that as more than a drop in the bucket compared to the massive geochemical changes we are subjecting the planet to. We are at the point where the Arctic region is ice free for much longer portion of the summer, and this means less light is being reflected back into space and more is being absorbed there... a thinner layer of ice reforms in winter, but the Arctic winters only get a few hours of indirect light - summer ice is the critical factor.


Think about it, vegetated surfaces will create chemical energy from sunlight through photosynthesis. unvegetated surface (concrete, pavement or bare soil alike) will turn the sun's energy in to warmth/heat*. We all know how significant this can influence microclimate by experience, several degrees in temperature from a well vegetated area to a bare soil or concrete area.

Yes, plants tie some of the energy into a chemical form via photosynthesis (3 to 7%), and this energy is potential and not reactive until the plant material is burned or metabolized by other life forms. But most of the cooling comes from shade and evapotranspiration of water. With evaporation, the air temperature is reduced but the heat is still 'latent' in the atmosphere. On a local scale, that may not be an issue, but on a regional or global scale, it is very important. The 'effective temperature' is what is important to most life forms, 90 degrees F in the dry desert is very different from 90 degrees F in a moist tropical area (they have very different 'effective temperatures'). If the air is dry we can cool ourselves by sweating or misting and we benefit from the evaporation. If we raise the humidity for a larger area, we don't benefit the same way.

The Miracle Tree - Moringa
We are looking at frost the next two nights. My moringa have grown for two seasons. The second season they grew a good deal taller, and are blooming a bit. But not many leaves on my moringa sticks - a new layer or two grow, and then everything under that drops their leaves. Not very productive here in north Florida, don't know if it is the soil or what.
show more
8 years ago
plants
Nature vs Wall St
I've thought along those lines before - you are absolutely right, on some scales, a fruit tree can give tremendous return.

There are things that most economists seem to get wrong ... for example, I see a few hours of gardening as recreation and exercise and therapy, but they see it as a cost for some reason, and go on to disparage gardening as unprofitable. Probably the same reason that my neighbors see leaves as a waste instead of a resource.
show more
8 years ago
meaningless drivel