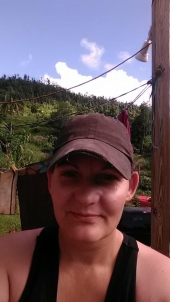 I am 46swf. My children are all grown and I am free to live my dream. I am moving to Dominica.
I’m curious if you’ve moved to Dominica yet and what’s it’s like there?  How is it trying to find a place to live?  For some reason Dominica recently popped up on my radar, and while my partner and I aren’t really planning on moving anytime soon, we are always interested in learning about islands that are more permaculture aligned and offer affordable simple drama free living....for future potential ;)
There’s not much first hand info online re: actually living in Dominica as an expat so I’d be so interested to hear anything you feel like telling! :). Best of luck to you on your journey!
show more
6 months ago
permaculture singles

tree bog vs. dry outhouse
we've been considering doing something like this concept except the trees surrounding would be bananas, which are heavy feeders and super easy to grow here in the tropics. It never gets below mid 70s here so no risk of freezing. The only issue is making an adequate hole since our dirt is super rocky and hard to dig. What do you guys think, is it a good idea?
show more
8 months ago
composting toilet 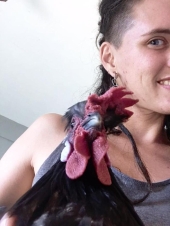 Help me get eggs from my Jungle Chickens!
And thank you all for your advice! 🖤
I am really loving raising happy jungle chickens!  They are such characters.
show more
8 months ago
chickens

Help me get eggs from my Jungle Chickens!
Finally fresh eggs!!
show more
8 months ago
chickens

Help me get eggs from my Jungle Chickens!
Update!!
I finally managed to find one nest, due to the advice to listen for the hen to cackle. And she made it inside a covered foyer next to the house. Now my semi-feral hen Universum lays an egg about every day and always makes a huge deal about it so I know when to check haha.
I also have five 4 month old hens, and four 3 month old (hopefully) hens that I’ve reeeally tamed, so tho they are wild and always free range during the day, they return to the house at night or whenever I call them. Right now they sleep in a pallet house we made in our bedroom, but soon they’ll have their own outdoor coop with nesting boxes. They’re all mixed breeds and It’s so fun to see what characteristics they develop as they grow up. I’m not sure how soon they’ll start laying but I’ve heard 6 months?
show more
8 months ago
chickens

Banana trunk planters. Growing vegetables in living and dead banana stems.
I am intrigued by this idea. We have a lot of bananas on our land here.  I can confirm that our lettuce did not appreciate the hot, dry -season tropical sun. We sort of gave up on it for a bit after that. This sounds like it might be a good way to grow it in a nice semi shady location. I’d love to hear what happens if anyone here tries it!
show more
1 year ago
tropical climate

Help me get eggs from my Jungle Chickens!
I was reading a thread in this forum about raising free range jungle chickens, but it was old so I figured I'd start a new one to ask my question, hope thats OK :)
I have a small flock of 6 semi-feral chickens of various breeds, all seem to be adapted to living and foraging for themselves in the jungle.  The rooster and one hen are the tamest, but are not too interested in being touched or held haha.  I feed them coconuts and meat and other kitchen scraps and occasional chicken pellets but they mostly feed themselves. They live between our house and the jungle, in a small vine-covered tunnel next to a fence, that they seem to have chosen as their home.  I hope to build something there for them to lay their eggs in since they spend most of their time in it when not out hunting.  They forage and hunt all over the property which is plenty of tropical jungle land.  They can fly very well, and sleep high up in the large bamboo stand.
I want to get eggs from them, now that some are starting to get old enough.  I tried making nesting boxes out of plastic totes with removable tops, by cutting a hole in the side and filling with the bamboo leaves they like nesting in, but they were not interested in going inside.  I'm assuming because of risk from rats (we have lots of large ones here)?  I am looking for suggestions for how I can keep them free-range but also be able to gather their eggs by at least knowing where they are laying them or somehow building a nesting area that I can convince them to use that is safe from rats (which are basically the only predators here, other than the occasional stray cat or dog which we try to keep away from our property).  Thanks in advance!  Photo of me and Floofy the rooster (he got named when he was still a fluffy little baby and I thought he was a hen!  He is definitely the boss chicken,  but is the smallest of the whole flock and its hilarious to watch him trying to keep up with all his tall, swift and long-legged hens).

show more
1 year ago
chickens
questions about dog doo and bones in garden
I *have* heard that they can be healthy/normal, and that many people have them without knowing.  But intestinal parasites are literally the only thing that grosses me out!!! XP  oh dear haha
show more
9 years ago
organic
Establishing a Stinging Nettle Patch
I would like to grow a stinging nettle patch as well!  I didn't plant any this spring, because my dad swore he had tons of them grown in the back field, however I think what he has is thistle...=S
I do have a packet of nettle seeds...should I plant them now, in the fall, or next spring?  I live in about the middle/east part of Wisconsin.
Thanks!!
I totally appreciate nettles...they make a great infusion and I can't wait to try them cooked and with butter! =P
show more
9 years ago
organic
questions about dog doo and bones in garden
Ohh, thank you for the reply!  The only other root veggies I planted that are actually growing are a few beets.  However, I'm not exactly where the dog poo compost went---probably all over =S  So maybe I should just skip the beets...
At least my cucumbers and squashes are flourishing!!  Those should be OK, right?  And the lettuce?
I wonder what the chances are that I could have gotten worms from the radishes.  What type of worms is it that you have to worry about with dog poo?  Would there be symptoms?
show more
9 years ago
organic