allegheny chinkapin for nuts
I agree with everything S Bengi said, but would also add that Chinquapin are not blight resistant.
show more
7 years ago
trees
dwarf/hybrid hazelnuts?
I don't know what your management techniques are planned to be for this area - but a nice feature of Hazelnuts is that you can cut them down when they get too big. They'll sprout right back.

It might be worth buying the hazelnut varieties you really want, and then coppicing in 8-10 years
show more
7 years ago
trees
Help Needed Raising Rabbits.
One of the reasons that you noticed a difference in caged rabbit versus wild is the fact they are actually different species. "caged" are a domesticated European species bread specifically for meat and the wild ones are just that, wild. They actually can't even breed together if given the chance. The other reason is of course that the wild hare lived in the wild running for it's life and eating whatever foods it could find, as opposed to the caged rabbit who sat in a cage and ate alfalfa.

For your experiment in rabbit as livestock - It sounds like you are having a number of issues. First off, if you are going to go the caged route (not a bad route) then you should have a separate cage for each breading rabbit. That means does and bucks. Move the doe to the bucks cage for breeding, as soon as they are done remove them. once 29 days pass watch her closely. she should start looking anxious glancing back and forth and generally acting like she's got somewhere important to be. Only now is when you should add the nest box and then a bunch of straw or hay in the cage. if all is well, she will start taking the straw and packing it in the nest box within an hour or so. It's good to leave her alone at this point. In case you miss this step somehow and she kindles on the cage, immediately put a nestbox in the cage with bedding and place the newborn kits into the box. She'll figure out what to do next.

There are two reasons for kit eating in my experience. One, is that you have a crazed cannibal doe - which warrants a trip to the freezer. But the more likely case is that the kits have already died for one reason or another. Most animals will not let fresh protein go to waste, and even more importantly wont let their be a rotting corpse in their confined space.

I recommend you consider doing a bit more research before you go further. There is an incredible amount of information online that can be found with a simple google search. If you want the real deal information on rabbits, I recommend purchasing a copy of Rabbit Production.

A playful note on the recent idiocracy podcast discussion 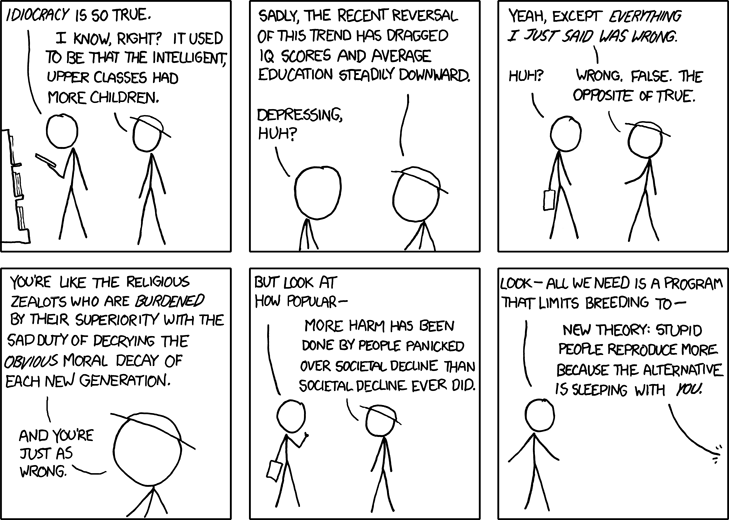 Thanks to XKCD.com for providing my life with endless entertainment.

Also, thanks to Paul for all your podcasts and dedication to disseminating knowledge. I enjoy it all immensely.

show more
8 years ago
meaningless drivel
daily-ish email frequency
Definitely not too much. It would be a different story if there was tons of ads and picture files in there, but they are simple and interesting.

show more
8 years ago
tinkering with this site
Rabbit Skin Glue - for Gesso
I am definitely going to make it.

I am in the middle of some distracting stuff right now, but I will be making a few passes at it this winter for sure.

I'll be sure to keep this thread updated with what I learn and my progress.

Felix, is the hide/bone glue used for fastening pieces of the violin together or for the finish?

It sounds like your book is suggesting just leaving the thinly spread gelatin out to dry. I guess I'll need to find a surface it doesn't stick to... being glue and all. Very interesting.

Thanks for the input folks.
show more
8 years ago
ancestral skills
CFL Disposal Survey
19 responses so far. Not bad!

I'd love to get at least 50 results if possible. So feel free to let me know where your CFL's go. Results on the new year.

Pastured Rabbits
Thanks for the thoughts. I think Hugleculture is a great idea to keep the pasture productive through the summer. I don't know about it working as underground rabbit containment though. It would have to be a very dense layer of wood and not decompose too much. Locust?

hehe, then there wouldn't be too much hugleculture effect I suppose.

Mr. Rufus Dufus! I love it! haha. No dogs here yet but I agree with you about moving them. Now.. catching the ones for harvest might be a different story. I'll have to figure something out for that.

It sounds like you are talking about a pastured/cage set up where the breeding and nursing take place in confinement, and then the fryers and buck pasture together. I'm considering the same thing. I have two bucks right now, and I don't think they would be OK sharing a paddock together. So maybe I'll start off with just one pasturing. I think that if 1 buck and all fryers were fully pastured from weening forward that would reduce my pellet consumption by ~75%. Any behavioral concerns from that set up? Julia mentions that pastured rabbits take about twice as long to get up to weight. If that is true - fryers will be getting into the realm of sexual development. I don't think we're likely to get breeding happening, but I'm a little concerned about young bucks fighting.

Another big thing is fence construction. At least on the perimeter, I'm thinking I need to bury the fence 2 feet down and still be 3 feet high from the ground. Any experience in this space?

The third major thing in my book is makeup of the pasture. What are you planting?? I'm definitely getting alfalfa in with a mix of orchard grass, ryegrass, red and white clover. Not sure what else to include. I also will have mulberry and sunchokes just outside the perimeter that can be added. Additionally there is an infinite supply of kudzu down here which I can always give them. What is your plan in this area?

One of my major handicaps is space. I'm working with a pasture about 1000 sqft. So I'm either going to scale down to match it, or keep experimenting till I can get some more space for them. I really like the idea of moving in this direction. I've started in cages, but it was never my intention to stay that way.
show more
8 years ago
rabbits

Pastured Rabbits
Oh, now I feel bad. I got the same response from her this morning

50 bucks for the CD. I think I'm gonna spring for it. She's still the only person I've heard of who's documented doing such a thing. Also, it seems like there's a bunch of other great stuff on there.

Thanks for posting the thread Jamie. i had also read that one. Again, good info. But really my ideal for this thread was looking for leads of anyone who has actually done it. It has already been somewhat fruitful.