You Alone in the Maine Woods by Gareth Anderson 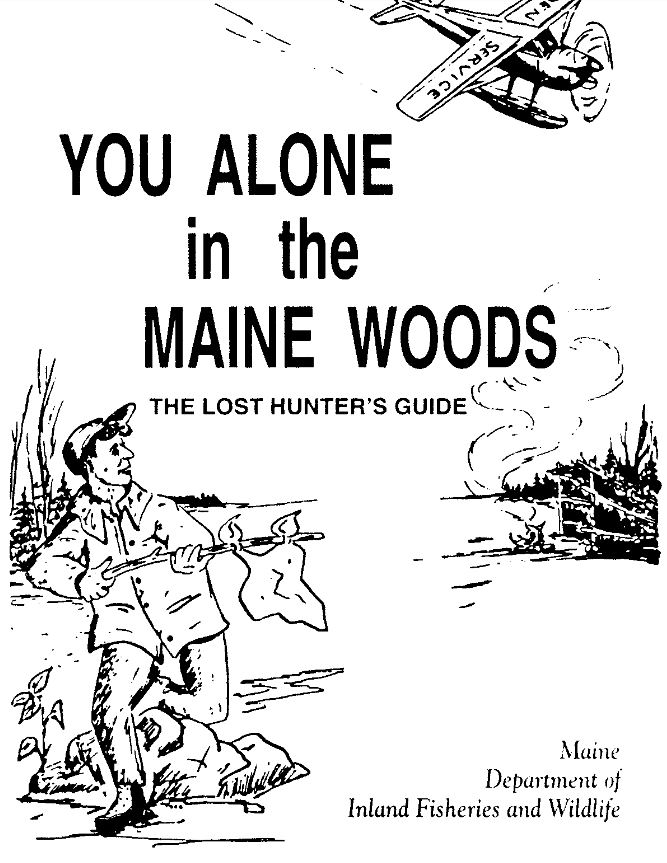 Summary
You Alone in the Maine Woods is a comprehensive guide to preparedness, safety, survival, and comfort in the woods of Maine. It covers everything you might need to know from survival kits and clothing to shelters and first aid. As quoted from the manual, "This manual may not contain all there is to know about survival, nor is it a guarantee against getting lost. It is an effort to provide you with the necessary information to manage in the wild. this book can be considered an aid to survival until help arrives should you lose your way... This manual serves a twofold purpose: 1) To be prepared for survival in the Maine Woods. 2) To provide steps to aid in rescue. By reading this manual, you will help safety awareness in our Maine woods."

Where to get it?
amazon us
free at Maine Inland Fisheries and Wildlife

The background of this book is interesting. I grew up with this book as a kid, and would often hike deep out in our forest, build some of the shelters depicted in the book, make a fire and warm a can of soup over it, and even spend the night nested down in a pile of warm rocks and fir boughs. Why my mother was never concerned, is beyond me, this was winter camping after all, and temps could get down to below zero. However, the book gave me a life-long love of the outdoors, and confidence to tackle it.

The first thing the reader should understand is that the title of this book is misleading; this book is for anyone. Homesteaders, survivalists, hunters, hunter-gathers, really anyone, and they do not have to be in Maine. The reason it states Maine in the title is because of who wrote it, and their purpose. Written and distributed by the Maine Department of Inland Fisheries and Wildlife, (commonly knowns as Game wardens), its purpose was to be handed out to sportsman in case they got lost. More of a booklet then a book, its diminutive size was so it could be stuffed into a small pack or shirt pocket and be on the sportsman when they ventured out.

Spanning thirty years, it packs a lot of information for its size because the information could save someone’s life. Chapters include: What to pack for emergencies, how to dress, reading maps and compasses, survival fires, shelters, staying warm, mental control, edible foods, first aid, water safety, and boat safety. If there is anything wrong with this book, it is just that, it is more of a booklet, but books on survival are for more detailed analysis. This was a book written by the people who are saying, “we are coming to get you, this is what you need to know until we do”. It contains nothing more, and nothing less.

However beyond just being a practical book that I believe should be in every sportsman emergency kit, practicing some of the techniques can be a lot of fun too, both as an individual, as well as a family. One year, just to get the kids out of the house in the middle of winter, Katie and I took the kids along and built a shelter as depicted in the book, kindled a fire, and had snacks and cocoa. Yes, the book unto itself could save your life, but can also be family-building time too. Equally, I think it would be a great book to read for the homesteader who planned to camp out while starting their more permanent shelter. In other words the; camp out while we build a cabin, until we build a house scenario, that I full endorse.

Interestingly enough, I admire this book so much, I have gone through great pains to get it. Once, upon losing it I had to ask a Game Warden friend get another. That one too was lost and so a few years ago, when I saw a copy at an antique store, I almost bought it, but passed on the opportunity. I really regretted that. So to my surprise, when I was gifted by the generosity of members of Permies, a man that asked to remain anonymous, graciously included a copy along with his monetary gift. The man had no idea how the booklet had been such a part of my life.

Luckily this book is free, both as a download and in paper print. I suggest the paper print, only because a person could have it on them in a survival situation. BUT there is a shipping cost: about $2 the last I knew. Like all my book reviews, I try and provide not only informative reads, but economical ones as well.

You Alone in the Maine Woods


DSCN1075.JPG
Michael Horton
Posts: 13
posted 2 years ago
I think many people don't realize just how dense the forests of maine are. A book like that would surely be a lifesaver. ""How To Stay Alive In The Woods" by Bradford Angier is another good one.  I had a copy as a kid and seeing this post made me remember it. I think its time to pick up another copy.
Travis Johnson
pollinator
Posts: 4958
1159
I like...

Michael Horton wrote:I think many people don't realize just how dense the forests of maine are. A book like that would surely be a lifesaver. ""How To Stay Alive In The Woods" by Bradford Angier is another good one.  I had a copy as a kid and seeing this post made me remember it. I think its time to pick up another copy.


I know what you mean on how dense our forests are.

When I clear land, I figure on about 300 stumps per acre, but some forest could actiually be higher. I am pretty sure this section of forest that my daughters are about to enter is in the 400-500 stumps per acre category.